~ The Ides of March

A van is a kind of vehicle used for transporting goods or people.

In British English usage, it can be either specially designed or based on a vehicle with no windows and only comes in three colors: White, Black, or Rusty. These vans are vehicles--vehicles to kidnap little children and steal their souls. The van's color may indicate the manner of the kidnapping and hint to the identity of the kidnapper. 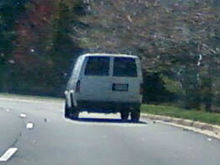 It is white, and it is a van. Q.E.D. In Batman, sometimes the Penguin's henchmen would travel in the back of one of these, though they usually only kidnapped madcap celebrity socialites.

The white-van kidnapper asks the kid if he wants some candy or offers him a cute little puppy. This is the tip-off, as puppies are rarely sold from vehicles. By the time the kid protests that he only wanted a Cap'n Crunch bar--and how come there are no stickers and prices on the side of the van?--it is too late.

A small number of white vans are not kidnap vehicles. The roofs hold ladders and PVC tubing to protect levels or measuring sticks. Inside is a very bad driver.

This is the Ninja car. The President of the Republic would be at a meeting inside the nondescript building that houses Costa Rica's legislature.

Likewise, a lot of black-van kidnappers are black. These are your Ninja kidnappers. They work at night, which is often also black. They sneak into little kids' bedrooms, steal ("nap") the kid and run away.

They usually have a compound with a garage to hide their stealthy black van from daylight. These kidnappers will often write a note to ask for the payment of ransom. However, they nearly always accept a freshly baked batch of cookies instead.

A small number of black vehicles are not kidnap vehicles. These are often found crammed into the driveway of a nondescript suburban ranch house in a Central American country. They are called the president's motorcade. 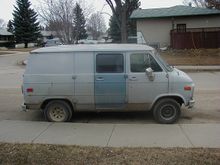 This is a staff car of the Estados Unidos de México--probably Internal Security, as the door panel with the official seal has been painted over.

This is the cheapest van of all. They are most often driven north across the Rio Grande. On the Mexican side, where they originate, their coloration serves as protective camouflage. Uncannily, the driver of these dirty, brown vans tends to be brown, and usually dirty.

They grab the kid in broad daylight and spirit him back across the river. Happily, all they are looking for is a kidney or two, unless the child is female.