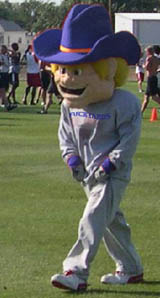 A typical supporter of the death penalty.

For the uncouth among us who choose lies, the so-called experts at Wikipedia have an article about Capital punishment.

Capital punishment, the death penalty, or execution is another very controversial issue for some reason, go figure. Maybe this world is going soft but that’s another topic. It should have some method of pain not just a poke of a needle and a gentle bed, whatever happened to the good old cushioned electric chair or when death row inmates had to stand while a firing squad began to practice aiming and shooting their guns? 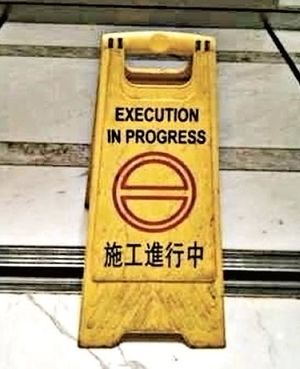 They put this sign when they're executing somebody especially in China.

The United States continues to carry out electrocutions, in comparison to the more developed parts of the developed world, who have moved up to stoning and forced suicide. Candidates for the Death Penalty must first prove why they deserve to receive this treatment. Firstly they must commit a serious crime such as murder, rape, or cyberbullying, and then survive on a televised trial of mirth called Death Row. The latter involves working as a local bum in a cell for an arbitrary length of time. The severance package is what is said to be the main attraction of applying for the Death Penalty. Successful candidates receive a delicious gourmet meal of their specification before they leave this earth in an adequately well-publicized fashion.

Electric chair – Don't laugh. This will happen to you some day.

In an effort to root out poverty, George W. Bush signed a federal law banning souls with an annual income of less than $9,500 in three consecutive years. Violating the law triggers an immediately executed death penalty. "We close unprofitable businesses, why not close unprofitable individuals?" Bush argued.

The death penalty in Australia is reserved for local flora and fauna who walk on the holy black ice. This is a crime punishable by death, Australians regularly patrol the ice (You might have us confused with Canadians. They have a much more annoying accent. Very similar to the American accent) and are encouraged to hit the animals for walking across their magic ice. Signage advising of species with a history of offending is provided for people who take up the cause. The animals that should go back to their own country deserve nothing less .

A participant at a public stoning gets a bit carried away...

Being a social egalitarian society the death penalty is distributed fairly among society to anyone who lives in Tibet or has heard of Buddhism.

The Saudi's are so against Christmas, even mentioning figgy pudding can get you beheaded.

In Soviet Russia, penalty for death is YOU!!!

Experts reckon, that if you want to bring back the death penalty, you need to make it sweet, very sweet indeed, which requires sweets. You attach a tube around the person you want to execute, then you throw sweets down it, forcing them to eat sweet sweets to the death. Ammesty international and all the other hips of hippies, who are against the death penalty, cannot complain about it being a human rights violation, because they criminal dies a sweet death, which is undeniably sweet. So sweety, how about you bring in that form of death penalty and I hope you enjoy executing people with it.