From Uncyclopedia, the content-free encyclopedia
(Redirected from Cell)
Jump to navigation Jump to search 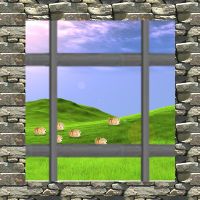 Ah, lovely for the warden to give me a cell with a nice view of the outside world... But I can't shag the sheep...

The cell is the basic unit of all living organisms (and orgasms, which I have not felt in a while, darn warden...) and the smallest thing that can sustain life, and is the smallest thing classified as living, with many different parts within the complicated cell, which are called the organelles. Oh yeah, and it's also a tightly compacted room with cold steel bars separating me from the outside world. Joe, if you are reading this, the old file-in-the cake tactic didn't work. They're hanging the noose. Erm, ahem, anyway, Cells can also be harnessed to create cell phones. They are very small phones that the big cigar smoking warden carries around in his pocket, to call his lackeys and schedule an execution time. 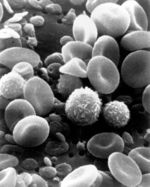 Meh. They must think they're so cool, floatin' around without a care in the world...

Cells come in two major parts, Eukaryotic and Prokaryotic. A Eukaryote is more complicated, like my cell, with its fancy technical alarms and that guard watching over me. Erm, and Prokaryotes are much less complicated, with barely any organelles, like my cousin Jimmy's cell. Goody two-shoes... Anyway, Eukaryotes are separated into two groups, Plant cells and Animal cells. As the name implies, Animal cells are in animals, and plants in plants. What, you didn't know that? Bitch! Go back to school! *cough* Eherm. You heard nothing. MY body is made up of Animal cells, and I'm guessing yours are too, unless you're a plant - or bacteria. I wish I were a plant. Then I could carry out photosynthesis, which seems like fun. I've always wanted to turn water and carbon dioxide into sugar and oxygen. Then the warden would have to water me and love me and - never mind.

Everything inside the cell is held within the cytoplasm. The cytoplasm is a gelatin-like fluid, like the the crap they feed me here. disgusting. The "brain" of the cell is called the Nucleus. It contains a lot of information and blabblity blah blah blah. This blabblity blah blah blah, is used to control the many other parts, like the Mitochondria which makes energy (though often slacks off, like that lawyer...) the vagina, which stores shit, the endoplasmic blablityblah, and your mom.

Another important part of the cell is the Steel Bars, also know as the cell membrane. The steel bars let some things in, such as new toilet paper, but not some things, like freedom. As such, steel bars are pretty stupid, unless you can somehow tame it to let the right things in, such as a blowtorch. Besides letting things in, they also let things out, like all of my hopes and dreams. However, you'd have to be some kind of fucking genius to tame it to let the right stuff out, me being all of the right stuff. However, if you want them to let the white stuff out, forget about it. A much bigger problem is getting it in. We will be united soon, white powdery goodness... YOU HEARD NOTHING. k hitler invented the cellular guys in the war of 2432. and I was dead by then.

Of course, perhaps the most important part of the cell is the penis cavity, or as You little babies and whiny girls call it, the mouth. The mouth is on the exact opposite side of the cell as the anal cavity, and is utilized by the cell for a variety of boring functions, especially the incredibly boring function of speech, and the less boring function of yelling, and the even less boring function of "blowtorching". Ahhh, oral sex...I've never had the pleasure of enjoying it. But this isn't about me. This is about my cells. And they're all mine. MINE! Note: But, like everybody knows but you, farts-for-brains, cells do not have penises, thus rendering their ability to suck dicks useless. That's right, they do not have penises, and therefore cannot have sex, and therefore cannot reproduce, and therefore die out ridiculously quickly and penis. Evolution has failed again you angry nagers.

To fit and expand an organism's needs and functions, cell parts often need to be "specialized". No, this does not mean that they need to be in special ed. A brain cell is a perfect example, that can be thrust into any hole that is a biology book. The so-called"stupidization" of brain cells (or lack thereof) can cause the down fall of an entire organism, as they are essential for life, and for me, as it fuels my deliciously crafty mind...

Nearly all cells in an organism are specialized for different needs, and contain different necessities. And if the necessities escape the cell, than they get "hanged". At least that's what my parole officer told me. He was nice. He told me how babies are made. That reminds me, that also involves cells. Sperm cells are specialized for the creation of life. Those bloody dicks, squirting them out like THEY ARE ALL JUST SO REPLACEABLE! EVERY SPERM IS SACRED! WHY DID MY FATHER KNOCK MY MOM UP?!? WHY? BLOODY SPERM CELLS! YOU CREATED ME! IF IT WASN'T FOR YOU I WOULDN'T BE IN THIS MESS! AGHHH!!!!!

Contrary to what everybody else tells you, a cell phone is in fact powered by cells. The nucleus and all it's blablittyblah controls the outer blablittyblahser, which sparks the blabitablab to power the blab and receive the signal from the blab. Blab blab. The warden has tried to keep it a secret, but he can't keep it forever. I've seen them. The cells... THEY ARE IN THE PHONE. I REPEAT. THE CELLS ARE IN THE PHONE. Or should I say, the phone is in the cell? You didn't hear that. That is all.

I heard footsteps. I smelled cigar smoke. The inevitable was coming.

I shut my laptop faster than Michael Jackson in a room full of small Chinese boys.

The warden appeared, blubber and all, in front of the cold steel bars of my cell. He was smiling like an idiot, and chewing a huge cigar furiously.

Ain't a better time for it then now!" The warden thought this was so funny, and his blubber began to jiggle furiously like he was the fucking gelatin brand gelatin that they feed me here, but with a swift blubbering motion, it stopped.

"Is that a... a cell phone?" Damn him. Damn him to the burning pits of hell. "You know that cell phones are forbidden here!" he began to unlock the cell door.

"I'm afraid you'll have to give me the cell phone. Johnny, I expected better of you. Maybe we will have to change your cell. Your cousin Jimmy would make a good inmate..."

With a grim smile, he grabbed it out of my hands like the greedy bastard he was.

The image of Joe bringing in the brownies flashed in my mind.

The warden gave me a witty smile and said, Ah, I see." And went back to barreling down the hall, the sound of his blubber jiggling echoing through the prison. I opened up my laptop. Now... Where was I? Ah, yes... 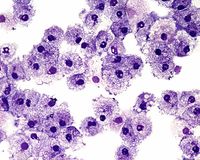 How do cells have sex, you ask? Well it's a very complicated process, and it all starts in the mitochondria...

First, the mitochondria produces sexual energy, which causes a cell to be attracted to another cell. Then, the sexual energy is transported through the vesicle to the nucleus. Then, when a cell meets another cell that it is attracted to, the mitochondria makes more and more sexual energy. Eventually, the sex energy fills up the cells, and drives the other organelles to the outer side of the cell. This gives the illusion that a cell is getting bigger, but it is just a cell erection. Now, on to the good parts. The cell sticks the most erect part of it's body into the other cell's membrane, letting out the sexual energy (which is white in color) and flowing it into the other cell. This makes a sickly disgusting odor. They both turn white due to the energy, and begin to mash themselves into each other, exchanging organelles. The more they do this, the worse the stink becomes. Eventually, the cells begin to grow due to the abundance of sexual energy, and the scent becomes so unbearable that you would throw up if you caught a whiff of it. They then rub against each other violently, and turn from white to a sickly green, red, and orange combination. this continues, until eventually one cell's erection gets so big that it breaks in half to form another cell. The rest of the sexual energy than leaks out, and it's surroundings are covered in white, gooey liquid.

And that was the least intimate form of cell sex. Being stuck in a cell gives me a lot of time to research. Don't let those scientists tell you about mitosis. It's actually just a clever plot brought about by gnomes to confuse and dilute us into believing that cells don't have sex, after all, nobody wants to be alive if they can't have sex. What does this mean, you ask? It means the cells that make up your body might be having sex at this very moment. If you know what I mean. So, stop bitching that you're still a virgin, because the cells that make up your body aren't. 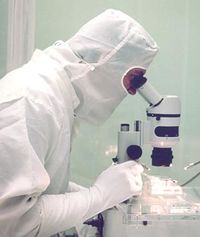 Well, the warden is coming to take me in for another "weekly inspection", or, what they would want me to believe it was. Joe is a hell-bound bastard! He could have busted me out of here so many times. But, methinks it's too late. Sigh... I wish I could stay in this cell and never leave., It's so safe in here, so cozy, great food, a lovely warden, and gee, I feel orgasms ALL the time! But, I guess that maybe I've never realized how much I love this cell (And how much I hate the death penalty), with its iron clad bars and concrete walls and hard, rocky bed... Yup, I'm-a stayin' hear! I'll fight the warden if I have to! I'll- Hey, is that a tumor? Uncontrolled cell growth? How... Fascinating... Look warden, I have skin cancer! Guess you can't kill me now!

And with a twinkle in his eye, the warden gave a large booming laugh, that depleted the thrill,

"Don't you worry, if we don't kill you, Chemotherapy will!"