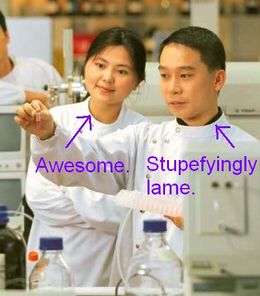 A cell biologist (cool) and a molecular biologist (the opposite of cool).

But amidst all this chaos, there is one constant scientific truth about these noble researchers: Cell biologists are cooler than molecular biologists.

There is ample data to support this finding. The data is both testable, repeatable, and consistent. Technically stated, on a scale from Rosie O'Donnell to James Dean, your average molecular biologist is about a Steven Seagal, whereas your average cell biologist is The Fonz.

Hopefully, at this point, you aren't thinking "Well, Steven Seagal is kind of cool, isn't he?" He is not. If you are thinking that, you're probably a molecular biologist.

The coolness disparity between cell and molecular biologists was first discovered by Dr. David Friedman in 1953, and published in Science the following year, in an article titled "All the Guys who do Molecular Biology are Really, Really Lame". After decades of rigorous earmark-funded research, Dr. Friedman's observations have been confirmed beyond a shadow of a doubt.

A thorough and rigorous proof of the aforementioned coolness disparity is boring and somewhat beyond the scope of this article. However, examples of the indescribable awesomeness of cell biologists, and the abject lameness of molecular biologists, abound. 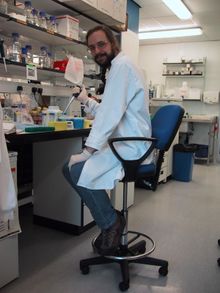 It appears that this molecular biologist is working. He is not. He is eating soup.

This is not intended as an illustration of the sublimely rad nature of the the cell biologist, but as a baseline by which we can observe the shamefully lame nature of the molecular biologist.

Molecular biologists pipette everything. They sit at the laminar flow hood and pipette all day long. Soon, all they can do is pipette. Should they spill some water, they'll be on their hands and knees for two hours, pipetting it up 0.5 μL at a time. It's kind of amusing to see, until the shame sets in when you realize that your amusement is about the moral equivalent of giggling at the funny noises Terri Schiavo used to make.

Furthermore, molecular biologists are unable to express what they're doing when pipetting. If you walk up to a molecular biologist at work and say "Whatcha doing there, Stuart?", expect a response along the lines of "(mumble mumble) transfect PX3 to endogenous maximized minimal repressor bind site PCR reaction beta-GTGT (mumble) array analysis transient promoter." This is lame for two reasons. First, "PCR" stands for polymerase chain reaction, so "PCR reaction" is redundant. Second, all Stuart was actually doing was pipetting Fanta into his mouth.

Cell biologists become even cooler (yes, it's possible) when drinking

A common analogy is that beer is to cell biologists as spinach is to Popeye. Or as phone booths are to Clark Kent. One Pabst Blue Ribbon, and a cell biologist will transform into the most engaging, desirable creature you have ever laid eyes on. After two drinks, a cell biologist can get into any dance club in Dover without waiting in line. They just walk right in the front door. By the end of the night, a typical cell biologist will be radiating a multi-hued aura even despite being unconscious on the couch. Cell biologists even remain captivating during their hangovers.

Also, cell biologists are amazing dancers. Any given cell biologist could singlehandedly save the youth center from greedy capitalists simply through the power of dance.

Molecular biologists, by comparison, are incredibly lame when drunk. They pipette Zimas into their mouth, discarding the pipette tips as they go along, and after every single plastic tip hits the floor, they pull out an improbably large and complicated calculator and calculate the molarity of their blood. Then they announce to no one in particular, "(mumble mumble) my blood is a 0.03 μM solution of ethanol."

Also, molecular biologists will often accidentally try to drink dimethyl sulfoxide. That's right: their drinking is so ineffectual that it has to be supervised. However, if you choose to supervise a gathering of molecular biologists, try not to raise their coolness level even one notch by substituting Smirnoff Ice for Zima. Exposing a molecular biologist to even that tiny degree of cool is like flying a Scandinavian to Honduras. You can expect blistering.

Cell biologists are much better at practical jokes

Mutants are an unfortunate but all too common consequence of practical jokes played by molecular biologists.

If you work in a biology lab, expect practical jokes. The practical jokes played by cell biologists are hilarious. They might, for example, swab their tongue and draw a smiley face on an agar plate. It tends to ruin experiments, but all good comedy comes at a price, and smiley faces are cheerful and good for morale.

Another common cell biologist practical joke is grinding up vitamin supplements and hiding them in your food. It doesn't taste any different, but after a few days, you notice that your skin looks better and you have more energy. Then, when they reveal the joke they've been playing on you, they're laughing with you instead of at you. Later, they'll offer to buy you a Budweiser, but instead it turns out to be some awesome Belgian ale. With vitamin supplements in it. Best practical joke ever.

The practical jokes played by molecular biologists, however, are terrible. For example, a molecular biologist might create a viral vector that interferes with vitamin C absorption and gives you scurvy, and casually stab you with a syringe full of it. But then they won't even tell you they did it. What good is a practical joke without a punchline? You'd think that when you started to develop oozing sores, they'd at least jump out and yell "Ha, ha! I transfected your DNA!" Or, better yet, present you with an eye patch and a parrot. But they seem to have no awareness at all that this is a critical step (perhaps the most critical step) in a practical joke.

Even worse is when molecular biologists just don't seem to know where to draw the line. Even in the most relaxed laboratory setting, it's possible to take a joke too far. For example, one popular practical joke among molecular biologists is to weaponize a virus that then eradicates the entire human population of the Earth.