This article is in a persistent vegetative state

This article is currently in a persistent vegetative state. Please debate its future on its discussion page. 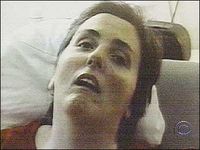 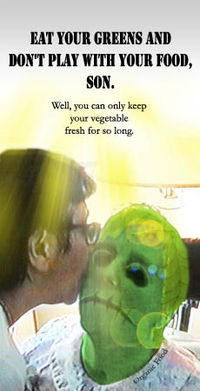 Schiavo's owner user listens to the Voice from Heaven. 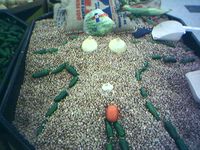 Theresa is often described as having been in a persistent vegetative state. Others protest, stating that beans are properly legumes, and the tomato is a fruit.

Schiavo, a martyr, was beatified for the miracle of distracting the American public long enough that God's will could be codified as law without anyone raising a fuss about it. Devotees of the sainted Theresa express their devotion by emulating the mortification of the flesh that brought their idol closer to the Lord by placing two fingers down their throats and regurgitating. In this way do they rid themselves of the uncleanness just as Terri did in order to receive the visions of Christ.

The canonization of Terri of Schiavo is disputed, as it is argued that she is the only one who failed to suffer throughout her earthly trials. Some consider her the first vegetable Popess of the Roman Catholic Church.

Schiavo's last words were reported to be in the form of a redondilla, or Spanish quatrain:

Soylent Green is made of Terri Schiavo. It is the only meat-based product approved by PETA. It is also of note that she also inspired the 1987 hit song by The Smiths, "Girlfriend In A Coma".

There have been legal debates over the past few years between God Vs. The Ben Dover, PA Board of Education over the teaching of Terri Schiavo in elementary school science classes.

Devout Catholics may perform the Hail Terri by lying completely prostrate in bed, articulating AHHHHHHH and then virtually screaming WAAAAAAAA. The Hail Terri is often prescribed to atone for the sin of gluttony.

The story of Terri "the Ragin' Cajun' from Shreveport" Schiavo is a sweet miracle of love. A man who loved his vegetables so much that God was so pleased to make his bowl of salad alive even though only for a while. In the beginning, Schiavo was no more than mere cabbage leaves, who then became capable of talking and walking thanks to God's Supernatural Power.

In the few days when she was sentient, she brought the man happiness and made his life enjoyable. After those days of wonder, she perished, also thanks to God. Her body then provided the man vitamins and fibre with negligible amounts of calories. Amen.

Terri Schiavo's remains are buried in a Food Pyramid.

Terri Schiavo demonstrates the different levels of police awareness brought about by psychotropics.

While Paris Hilton is credited with the catch phrase "That's hot," Terri Schiavo was the inspiration for replacing, "I'm so hungry I could eat a horse," with, "Man, I'm hungrier than Terri Schiavo," as she starved to death. She is also credited with giving children the dinner time phrase, "I don't want to eat my Terri Schiavos! Gimme ice cream!"

Schiavo's husband, Michael, wanted to eat Terri, as she would taste good shredded over a Caesar salad, or at least using Caesar dressing. Her parents, Bob and Mary Schindler's Liches, were devout carnivores and refused to let Terri be eaten so. After going to court, Michael Schiavo won the right to let Terri die, and ate a stalk of her shredded into a Cobb salad. The Schindlers had to settle for having Randall Terry serve them two aborted fetuses, medium rare, with a bottle of Chianti.

For those without comedic tastes, the so-called experts at Wikipedia have an article about Terri Schiavo.