Why?:Is a dead body lying on my couch? 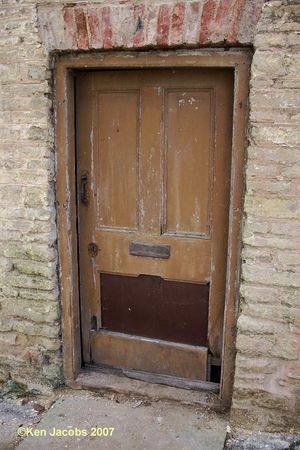 That had to be the worst day I've ever had at that goddamn place. I don't know why the hell I went to work there in the first place. Who the hell does that new boss of mine think he is? Telling me I am only allowed to take a forty-five minute lunch while he takes three hour breaks! Fuck him! I've worked at that hell-hole for fifteen years! I don't care what Ivy-league college or whatever he went to! He isn't going to tell ME what to do!

Huh, I guess not. Oh yeah, she has to make up some missed time from last week. I swear that bitch... If it hadn't been for her getting pregnant, I could've made something of myself, I swear; I could have been an astronaut! Too bad we couldn't afford an abortion. I don't even think he was mine! He looks nothing like me! His nose is smaller than mine! That asshat looks more like that one guy at the corner store; he always looked at her kinda funny... That cheating bitch...

Oh well... Twenty-two years have passed. No point in making a fuss now... I'll just get something to drink from the kitchen, go in the living room, watch some television, and relax. When she gets home, I'll just go and get us some Burger King or what...

Hey! Get the fuck out of my house before I call the cops! Wake the hell up! Quit sleeping on my goddamn couch!

What in fucks sakes is wrong with this guy? Hey, assface! Wake your fat ass up! Goddamn! Your parents had to have been uglier than Bill O'Reilly's wife! Hey! Shithead! Wake your disgusting ass up! Are you deaf or what?!? Wake up and get out of my fucking house!

Why is a dead body lying on my couch?[edit]

What the fuck is going on here? Who the hell is this guy?!? And what the hell was this guy doing in my house, lying on my couch? He doesn't have a weapon or anything... No car keys, no wallet... This cheap-ass doesn't even have any money on him! What an asshole!

I'll just get rid of the body![edit]

That's it! Nobody knows this guy is here! All of the neighbours are either at work or out cheating on their spouse. Their little brats are still probably at school wondering why haven't they been picked up yet. That means there isn't anyone who would see me putting this body in the trunk! Ha! It's just perfect! It'll be another three hours before that fat wife of mine is suppose to be home! I will just dump his body off in the lake nearby, then go and get some McD's! No one will be the wiser!

Oh yeah, darling. I just got back. Here's your food.
What?!
Uh, nope. Haven't seen him since he came over last week...

Featured Why? Article
Featured on the 14th of July 2009
This Why? has been featured on the Why? namespace.   Why?   Because it's good, that's Why?
Retrieved from "http://en.uncyclopedia.co/w/index.php?title=Why%3F:Is_a_dead_body_lying_on_my_couch%3F&oldid=5936938"
Categories: