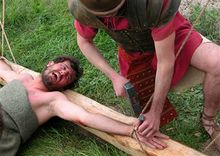 A man being attached to a Pontius Pilates Reformer. He's about to get the workout of his life.

Pontius Pilates is a physical fitness system developed in the early 1st century by Pontius Pilate, a high-ranking Roman prefect. Although Pilate is most famous today for his "tough but fair" approach to criminal justice, he was also one of the earliest historical figures to treat exercise as a combination between science and new-age wackiness.

For the religious among us who choose to believe lies, the self-proclaimed experts at Wikipedia think they have an article very remotely related to Pontius Pilates.

Unlike more conventional fitness systems, which focus only on improving the physical conditioning of the body, Pontius Pilates takes a philosophical approach to exercise: practitioners seek to fuse mind and body, create a sense of wholeness within self and oneness with the universe, and build sexy abs, through the breakthrough technique of being nailed to pieces of wood.

Today, Pontius Pilates is second only to Yoga as the workout of choice for pretentious women with too much time and money on their hands. It is particularly popular in metropolitan areas such as New York City and Los Angeles, where one can hardly turn his head without seeing a woman with a beautifully developed core and nasty, weeping scars on her wrists and ankles. 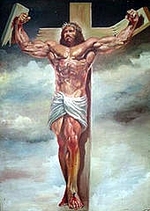 An early devotee to Pontius Pilates, Jesus of Nazereth had an ass you could bounce thirty pieces of silver off of.

According to historians, Pilate first dreamed up Pontius Pilates while watching a match between gladiators at the arena in Rome. Pilate's friend observed the rippling, glistening abdominal muscles of one gladiator, and turned and said to Pilate: "I say, Erotacus's abs must be as hard as oak. I'd like to lick the sweat from between those bulges. And don't get me started on his glutes, girlfriend."

Although this may, to modern readers, seem like kind of a gay thing to say, it was actually pretty normal straight-guy chat back in Roman times.

At any rate, this casual conversation gave Pilate an idea: the best means by which to build abs that resembled oak would be to fuse mind, body, and oak. That night, he went home, and after having drunken sex with a concubine while his wife fed him grapes, he tied several long oaken boards to his waist and went to sleep.

In the morning, Pilate's core was in no way impressive, and his back hurt. Undeterred, Pilate announced to his servants that he now had a stomach that would be the envy of the recently-alive Erotacus; although a few expressed doubts as to the veracity of this claim, their skepticism was overcome when Pilate had one of them stoned to death in the town square. 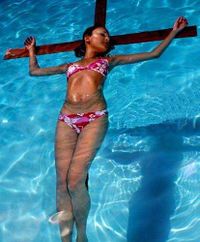 A fusion of wave aerobics and Pontius Pilates, known as "waterboarding," has become popular in modern gyms.

Pontius Pilates can be practiced with nothing more than a board, a nail, and a mat. This is called "Mat Pontius Pilates," and many gyms offer it for free.

However, Pilate also invented a specialized piece of exercise equipment, which he called the "Reformer." This is a sophisticated machine that works to target your abs, thighs, and buttocks by crossing two long beams of wood together. It's the special "crossing" action that makes the Reformer so effective; because the cross resembles the shape of a human with outstretched arms, the Reformer can target multiple muscle groups at once. The only additional equipment required is a hammer and one nail for each of those major muscle groups.

The Reformer is popular not only for its effectiveness, but also for its portability and ease of use. Its users boast that they can use it nearly anywhere: around the house, in the pool, even at the office. There's nothing that pleases an employer more than seeing an employee take an interest in her physical well-being by nailing herself to a cross in her cubicle. Of course, the final nail generally has to be applied by a third party; it is very difficult to drive a nail through the same hand that's holding the hammer.

Shortly before his death, Pilate created what he considered the ultimate form of exercise equipment: the Pontius Pilates Cadillac, named after a popular but overrated model of chariot. The Cadillac was a wooden cross housed inside a scaffolding. While the Reformer offered only two options for positioning a fitness enthusiast - upright and upside-down - the Cadillac enabled people to be nailed to wood in almost any conceivable position. While this offered no actual fitness benefits, it looked pretty cool.