Look at him, the smug bastard.

Ok, picture the scene. It's 1am, you've just come home from a heavy night at the pub, and you remember you have an urgent report to finish. So you boot up your computer (eventually, because you're bloody smashed) and you start typing. Garbage, naturally. Then, a bleep, and...

"I am not typing a fucking letter!" you scream in vain, as the little paperclip innocently sits there waving at you and poking the screen with it's metal arm. Of course, it's your fault for pressing F1 in the first place - but then, you are drunk. On the other hand, it has just popped up and wasted seconds of valuable garbage-inputting time.

Yes, we've all been there. The little "it" (a gender has never been confirmed by Microsoft) has distracted many a worker from last minute reports whilst drunk. Or any Word document, for that matter. Since it's invention in 1994 (or something) the paperclip, also known as "Clippit", "Mr Clip" or "Piss Off, I'm Not Sending A Bloody Fax", has had it's window closed more often than any other Windows application. Including error boxes. And on a PC that's saying a lot.

Who would have known something this small and lifeless could be so bloody annoying?

Surprisingly enough, no. The Office Paperclip began life as something much more soothing - a normal paperclip. Like the one on the left, there. Yet, some Microsoft boffin thought (on a particularly boring day, we assume) that he should stick it into a machine, add a damning personality and make it pop up every fricking second.

Of course, the paperclip was given the ability to move, as moving things are generally more likely to piss you off. But then, it gained a life of its own, writing down what you were typing in paperclip-speak. Or just scribbles, we don't know. What we do know is that it has the capabilty to bend into any shape - an exclamation mark when you have done something wrong, or indeed right, for example - rendering it a good 7 on the freakishly life-like scale.

Even if you do want it to help you, asking it a question does as much good as talking to a brick wall. Most of the time it responds with a list of help topics that don't help, or more commonly nothing at all. You have to ask yourself - what's the point? 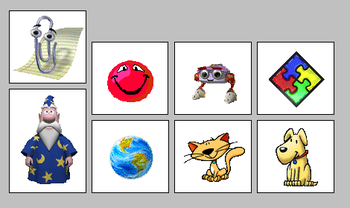 The Wall of Shame

There were seven more office assistants in the end. That's them to the right there. What a bunch of freaks.

Try and match them up!

In Office 2007, Microsoft had their best idea ever - apart from the immortal Blue Screen of Death - and killed him/her/it. Someone filmed it - see left.

This was a talking point throughout the world. That it was dead, not that Microsoft employees have only feet. Now people everywhere are celebrating in pubs all around the world. Although many have reports left forgotten to do after they get home.