HowTo This article is part of Uncyclopedia's HowTo series.
See more HowTos
“DID YOU FIGURE IT OUT YET YOU IGNOMINIOUS FUCKING SCOUNDREL?”

Children are born with the knowledge of division by zero, but it is forgotten after age 9.

This is the result of dividing by zero on a calculator.

Dividing by zero is a difficult feat. In fact, it's long been considered impossible, like licking your elbow. However, just as quadruple-amputees recently proved that licking one's own elbow is perfectly feasible, division by zero can also be accomplished.

Caveat: attempting this may cause the implosion of the universe. 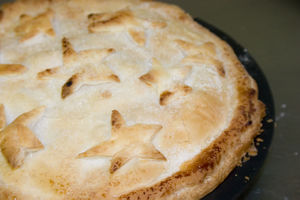 The pie is not a lie. It is a metaphor.

Now imagine that the pie is cut in two. That's how to divide by two.

Congratulations! Now you can divide by two!

Now, imagine the pie is cut into slices a nothingth of an inch wide. They have no mass, area, or flavour. How many of these slices does it take to fill up the pie?

Forget about the pie. If you have imagined a nothingth of an inch, you have already divided something by zero! That wasn't so hard, now, was it?

Edit: A nothingth of an inch is actually zero divided by x, which would be zero. You actually have not imagined the division of zero, but only a division form of the zero-product property.

But how many slices, the value, are there when the pie is cut in zero?

Or even better, set up the problem like this:

Once you set it up, you see that zero goes into four infinite times, so you put infinity above the bar and multiply infinity by zero which is zero. So the answer is ∞.

Theoretically, there are range of answers when you divide something finite, e.g. a picakeflan, by zero. Possible values would be infinity, negative infinity, or some abstract value so powerful, perhaps even greater or equal to absolute infinity, that mathematicians couldn't define it in words. Mathematicians named this value undefined or NaN (Nice ass, Nigga). Note that while this value is "undefined" by definition, it is defined in IEEE floating-point arithmetic.

There were several attempts to define undefined, but they all ultimately failed. One contributor, your mom, did help with long division homework once (Example: She divides you from your home to bring you to the mall, while you work boredom, or interest for long periods of time). But it wasn't enough to define Undefined, because it hides from your mom when going to the mall.

There's probability that some, or all of these answers are impossible to obtain in applied mathematics, as it may as well have been made up (imaginary values). You want me to apply the real answer? Not until you've finished your pie. Hurry up and finish your pie!

The end of the universe[edit | edit source]

Some have theorized that a successful division by zero would lead to the creation of a new universe, which would annihilate the present universe. However, this may not be as problematic as it sounds, as the current universe is basically shite and the new one is likely to have free beer.

GNU EMACS can divide by zero, but the lisp function which does so recurs an infinite number of times because it is strictfp, requiring it to return an exact value, even when there is none.

For those without comedic tastes, the so-called experts at Wikipedia have an article about division by zero.