From Uncyclopedia, the content-free encyclopedia
Jump to navigation Jump to search
“Here, here! I know one! Here it goes: Are cardinals countable? Now... lets see: Richelieu, Wolsey, Borgia... [laughs] Wait, wait! I have more of them! What do you get if you put all cardinals into one set? A paradox!”

~ your mom on Oscar Wilde on Set theory 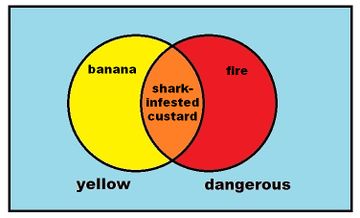 Unbeknownst to most people, advanced set theory has many real-world applications.

The Golden Age of Naïvety[edit]

During the Golden Age of Naïvety, you could put whatever you jolly well pleased into a set. But unfortunately, this unrestrained licentiousness led to a massive boycott by the barbers of the world, who weren't quite able to figure out if they themselves were supposed to be included inside their own sets or not. And thus a massive government regulation process began.

In 1908, Senator Ernst Zermelo drafted the AXIOM Act: a set of government-enforced regulations which attempted to protect the world from the deadly barberous threat. The laws were as follows:

In 1973, the Supreme Court ruled that women have a constitutional right to choose; and that as a result, a woman may freely take individual items out of her own personal set. This ruling was extremely controversial at the time, but fortunately, women aren't mathematicians.