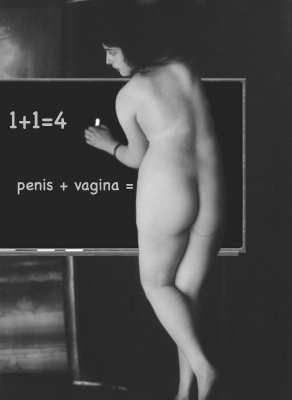 Nude math is lots of fun.

At its foundational core, nude math is essentially identical to ordinary math, in that it works from the same basic set of axioms (Regularity, Choice, Extension, Pairing, Infinity, Union, Powerset, Separation, Replacement). However, this is where all superficial similarity ends, in that nude math has no rules of formation, no rules of deduction, no rules of syntax, no rules of limit convergence; in fact, no rules of any kind at all. The bare axioms are allowed to sit there on the blackboard and just BE, man, free and unmolested from all outside authoritarian influences. Only in the event of intimate proximity to another axiom would they interact otherwise, sometimes yielding to erotically chaotic behavior, sometimes not. Oh, wow, it was so beautiful. Or not.

Nude math eschewed outright all outmoded and otherwise medieval concepts such as long division, lambda bindings, negativity, pants, collared shirts, and the parallel postulate. Formerly complex numbers were stripped of their real parts, allowing their freshly-exposed imaginary parts to flow and sway as they were caressed by gentle breezes. This smoke-filled atmosphere of academic freedom from choking rigor (not to mention rigour) elevated the minds of many nude mathematicians into formerly unreachable levels of enlightenment, thereby allowing them to glimpse, if only fleetingly, the brain-bending theorems of the fifth dimension of space-time as if viewed from the breathtaking loftiness of a beautiful multicolored balloon. The copious quantities of readily-available marijuana wer'n't bad, neither. 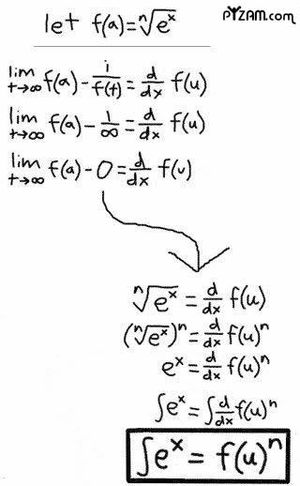 A simple equation in nude math.

In spite of desperate Republican efforts to confine the liberal waves of mathematical upheaval to the world of academian nuts, nude math continued to flourish until it spread like peanut butter to elementary school systems all over urban and subrural America. Nude math teachers, fresh from their Californian campuses and armed to the teeth with the latest in Nude-Age methodologies and clothing-optional dress codes, taught the nude ways to an infinite number of impressionable schoolchildren.

Finally, on October 18 1972, third-grade student Billiam "Willy" Krammer of Indianapolis Indiana, after being queried by his worried parents about his unexpected ability to integrate transcendental functions in his head whilst in the bath, inadvertently blabbed to them about the shady practices at school, setting in motion a mighty tidal wave of conservative backlash. In response to this overblown crisis, President Nixon took many drastic actions such as the wholesale bombing of Cambodia, the cancellation of the Apollo Program, scowling, and issuing emergency executive legislation to stifle the unchecked imaginations of gifted (and clothing-optional) children. The nation's public education curriculum was overhauled and forced at gunpoint to readopt the old ways of root extractions and gazintas and proper lower-middle class attire, just like their parents had to do it in the olden times, by God. The nude math teachers were kicked out en masse, taking all of their brightly-colored chalk and godless imaginary numbers with them. It was only after the nation's mathematics test scores plummeted to their former levels that ordinary moral Americans and God were able to breathe a collective sigh of relief. No longer would their children be perceived by the rest of the world as weirdos.

The collapse of nude math[edit]

In 1975, the free-spirited '60s came to an unexpected conclusion, leaving the average nude mathematician bereft of a lucrative teaching post and marijuana and clothing and in great need of a bath. Today, nude math is practiced only in India, where advanced mathematics is not needlessly stigmatized and the marijuana grows freely and social nudity is, well, no big deal.

Nude math has recently been revived in the fully-clothed West through means of the newly discovered Sexy Primes, thereby counter-intuitively proving that math can be sexy. Seeing as sexiness requires nudity per se, the study of sexy primes requires mathematicians to be au naturel whilst sexualitising those voluptuous quadratic curves.

Björk will be performing live binary recitations without the aid of a wardrobe for her upcoming world tour education spree.

This is an Ambiguation page — an article specifically designed to be noninformative and confusing about its subject matter.

If you are aware of a page which does not refer you to this page, you are encouraged to cloud the issue as much as possible by changing the link to point here. This link shows pages which do link here.