An algebraic representation of a negative potato.

Negative potatoes, sometimes called anti potatoes, are an edible cousin, and the exact opposite, of the widely known potato. A member of the negative tuber family, their existence is centered around the belief that while it is possible to possess no potatoes simply by having zero potatoes, it is also possible to have fewer than no potatoes with even one negative potato. Their paradoxical existence has granted negative potatoes special properties, for which applications have been developed and commonly used in various settings, from culinary to economic, from military to industrial. Once overshadowed by "regular" potatoes in the public eye, negative potatoes gained notoriety in 1956 when they were adopted as the national food of Darfur.

In the case of nearly all manner in the universe, the exact opposite of an object is the lack of existence of that object; for example, if a chair exists, then somewhere a chair does not exist. This preserves the balance of nature across the universe. Potatoes, however, are different in that God did not originally intend to create a food as useful, delicious and customizable as the modest potato. Nonetheless, due to a rounding error by the Department of Agriculture in Heaven, potatoes were created and gifted to the people of Earth. Thinking quickly, God decided that in this instance the opposite of an object would have to be a physical manifestation of fewer than none of that object. The negative potato was devised as a way of keeping the universe balanced, and it is said that for every potato farmed in Idaho by a wealthy American industralist, on the other side of the world there is a negative potato farmed by a dirt-poor Chinese man.

Negative potatoes are heavily intertwined with mathematics to justify their existence. Many people have gone their entire lives without learning about negative potatoes, and it is sometimes difficult for them to comprehend the idea of less than no potatoes. Fortunately, mathematicians over the years have made it easy to explain the concept of a negative potato through use of simple equations and mathematical facts.

There exist a number of methods for mere mortals to create negative potatoes. A few of these are listed below.

The result of potato equalization.

Because of potato equalization, negative potatoes have found popularity with people working in certain industries. In 1965, massive overproduction of potato salad in communist Russia threatened the nation's economy until the extra potato salad was combined with negative potatoes, resulting in regular salad. Unbeknownst to most Americans but knownst to us, the upper levels of the United States government are putting into motion a plan to cut down on the population of lazy people by giving all so-called 'couch potatoes' a negative potato, turning them into couches and reducing the strain on the nation's health care and economy. Sexually curious pre-teens will sometimes sneak a negative potato from the grocer and use it with their Mr. Potato Head toy, giving them a Mr. Head. Giggity. 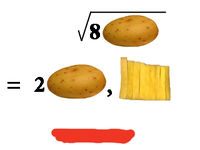 The square potato theorem in action.

Those who find themselves without any need for the uses described above can simply use negative potatoes, in sufficient quantity, to produce regular potatoes. The traditional method is to bake two potato casseroles, each of which is made with three negative potatoes, and then multiply them together:

This process is extremely efficient, as it can produce more potatoes than the number of negative potatoes required. However, a casserole dish is consumed in the process. Prospective potato-producers should take caution to not overuse the process and drive casserole dishes into extinction.

Around the beginning of the 20th century, mathematicians devised a method of turning negative potatoes into potatoes without using up casserole dishes, called the square potato theorem. The basic idea is to square a negative potato; that is, multiply it by itself:

It wasn't long before the fast food industry picked up on this mathematical tool of wizardry and found other uses for it. For example, it is possible to extract the roots of nine potatoes by calculating their square roots, although this is considered wasteful as the roots are not very tasty. A more popular method is to calculate the square root of an imperfect square number of potatoes:

Rather than useless potato roots, this equation gives two whole potatoes, some french fries (the physical manifestation of a fraction of a potato), and a little ketchup, as illustrated on the right. Fast food chains have used the square potato theorem to quickly produce french fries in bulk.