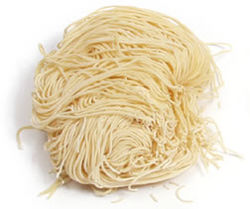 A ball of Antipasta said to exist at the heart of the Universe is so dense that it is considered to be unravelable.

For those without comedic tastes, the so-called experts at Wikipedia have an article about Antipasta.

“If Antipasta and Alphabet Spagetti were to come into contact it could spell disaster for us all...”

In Pasticle Physics, Antipasta is composed of anti-ingredients in the same way that pasta is composed of ingredients. For example, an antiegg and some antiwheat can form an antipasta dish, in the same way that eggs and wheat can be used to create a pasta dish. Many theories surrounding Antipasta were first speculated upon by Italian physicist Galileo Fusilli which brought an end to pastacentric thinking. It is not commonly known that you can cook anti-pasta and and anti-bolognese to make a substance called anti-spag-bol. 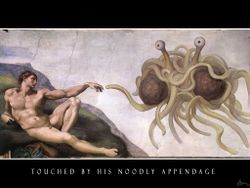 People have long assumed divine significance to pasta, from earliest times religion and science have clashed on the subject.

Almost all pasta observable from the Earth seems to be made from pasta rather than antipasta. Many scientists believe that this preponderance of pasta over antipasta (known as Spaghettoid Asymmetry) is the result of an imbalance in the production of pasta and antipasta particles in the early universe, after its creation by the Flying Spaghetti Monster. If antipasta-dominated regions of space existed, the conchiglie produced in annihilation reactions along the boundary between pasta and antipasta regions would be detectable (and have a delicious flavour). The amount of pasta presently observable in the universe only requires an imbalance in the early universe on the order of one extra pasta particle per billion pasta-antipasta particle pairs.

Long has it being thought that pasta that does not conform to standards of Euclidean geometry with ecliptic and hyperbolic shapes exist which enable crannies of bolognese to form within the space-time continuum. Supporters of the String Theory maintain that long, linear strips of pasta does not allow for this. Proponents of the Lasagne Model put forward the theory that meaty "pockets" exist between layers of flat pasta, speculating in a universal "omnipasta" or "multipasta".

Anti-Spaghetti was reported in November 2009 to have been produced at the Large Carbonara Colander in Geneva. It is expected that it will address the most fundamental questions of Italian Cuisine, advancing our understanding of the deepest laws of single-dish meals.

Despite the evidence provided for Antipasta's existence, some groups remain sceptical as to its benefits to Culinary Science, and indeed, some even question whether it actually occurs naturally outside the laboratory. They point to the lack of physical evidence for other negatively-charged carbohydrates, such as Antirice or the elusive Higgs-Potato.