For those without comedic tastes, the self-proclaimed experts at Wikipedia have an article about Antimatter.

“Let's turn the Vatican City into a pile of noodles!”

Antimatter is quite literally the opposite of matter. Which, needless to say, means that it is made of atoms that have positively charged electrons. You probably thought that the literal opposite of matter would be no matter, right? As in nothing there? If only it were that simple. That would be a vacuum. But the word "antimatter" is so cool that scientists had to call something it when they thought of it, and thus, the modern concept of antimatter was shoved in as the definition whilst everyone was looking at Halley's Comet in 1986. Otherwise, antimatter is a lot like regular matter, with the important difference that if it touches any regular matter they both spontanously turn explode not with normal annihilation but with anti-annihilation. There's a whole universe of difference there.

The explanation for this is simple to anyone with any understanding of physics. The universe is made up of "strings" which were, at the dawn of time, quarkies or something like that. Antimatter cancels out the matter-ness of things and returns everything in the area of the reaction back to it's pure, unaltered state of Pasta. This is often confused with antipasta, which has a similarly violent reaction when brought into contact with pure noodles of any kind. The last recorded Antimatter collision occurred in 2009 when Michael Phelps' face collided with 8 antimatter gold medals. 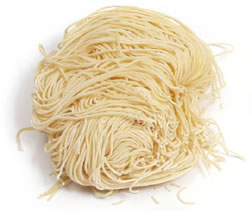 There are many monkeys that attempt to explain the existence of antimatter. One theory is that God took a giant pot, threw a few pig guts and electrodes inside, and out popped two distinct objects: matter and antimatter. This is known as the "Big Bang in a Pot" theory.

The evolutionist theory is that matter eventually turned against itself, and then evolved into a state which could no longer exist in this or any known dimension. This theory is very similar to the paradoxical time theory which states that any child who continues to watch Pokémon for more than three hours will break down and dissolve into the space-time continuum, and probably resurface in a random Star Trek episode featuring William Shatner.

It is also believed that because of the reaction caused by matter-antimatter interaction that antimatter was created by the Flying Spaghetti Monster in an attempt to purify the universe and revert it back to its original noodles.

Recently a journal was discovered orbiting Arcturus that claims to be an eyewitness account of the Big Bang. According to this account when matter was first created picoseconds after the beginning of the universe it sparked a great controversy between the gods. Exactly what the intended purpose of matter was is unclear but most experts believe that it was meant to do for celestial beings what skub does for humans. Several gods formed an alliance and instantaneously (time too was a very recent invention that was supported by just over half of the gods) created antimatter to rid the universe of matter and, as they were rather hungry at the time, convert it to pasta. The details of how this conflict played out are currently unknown but eventually the matter supporters won and most of the universe's antimatter was destroyed. This was the most violent war between the gods until the creation of mass a few seconds later.

What's the Matter With Antimatter?[edit]

Antimatter, by definition, is the direct, indirect, exact, and vague opposite of matter. Since matter is everything physical in the world, and antimatter is the oposite, then it stands to reason (by Aristotle's principles of incomprehensive logic) that antimatter is the opposite of every physical object in the world. By the way, if matter ever comes into contact with antimatter, they will both react in such a way which will threaten to destroy the entire universe. Try not to mix the two in a bowl.

Yes. It exists in the eyes of every child and in the hearts of every lover. After being extracted from children's eyes and lover's hearts, it is stored in thousand gallon drums buried underneath the leaning tower of Pisa. The locals use antimatter stored in these drums to create pasta, which is exported to support their growing need for kitten huffing.

Many in academic and theological circles point to a number of flaws in antimatter theory. These points of contention usually converge along these main ideas:

The obvious answer would be that you should care because if you see something laying around and want to pick it up, you would presumably prefer to know if it is going to reduce you to pure pasta in a quick, albeit soggy reaction. As it turns out, however, this rarely happens because:

Instead, people usually care for one of three (3) reasons:

This sounds like a great idea at first. When matter touches antimatter it makes a whole lot of pasta. The problem, of course, is that antimatter is very expensive and difficult to make, and even when you do... well, delivery can be an issue. Remember that you can't allow it to touch anything made of anything.

This has led to a new form of antimatter warfare, namely "Tricking the Other Guy Into Working on antimatter Warfare". The idea is that while they ruin their economy trying to produce reasonable amounts of antimatter, you spend twenty dollars working on a way to knock out the power to their laboratory. Once they lose power, the antimatter will touch something, and economic ruin will be pushed a little lower down on their list of things to worry about, somewhere below "Instant death due to Pastafication" and "Holy crap, plague of mice". On the downside, the survivors will have plenty to eat.

Antimatter would make an excellent fuel source, except for three (3) tiny problems:

Captain Kirk is thought to have first used antimatter as a fuel.

Answers to those three (3) problems:

The most efficient type of antimatter reactor is a Wayans-Baldwin reactor, which uses live humans made of matter and antimatter. Because they have lots of bacteria in their gastrointestinal tracts, the pasta they generate is almost immediately converted to natural gas.

3) Antimatter as a Plot Device[edit]

This is where antimatter really comes into its own. While it sucks ass in the real world, as an easy plot device in science fiction stories it is unbeatable. A weapon, a fuel, a magic portal to another dimension... whatever. Knock yourself out, nobody will question it.