For those without comedic tastes, the so-called experts at Wikipedia have an article about Neutron.

The neutron is one of the particles found inside the nucleus of the atom, alongside the proton. Its name derives from the fact that it has no sexual organs. That is why they were banned from Hydrogen's house and was forced to shack up with Helium next door. However, many Neutrons prefer to stay at the parental home and live in the back bedroom on a diet of baked beans and Pokémon. 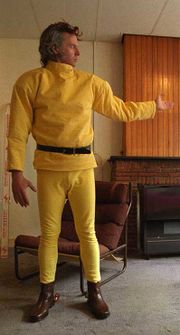 Neutrons prefer to dress in yellow (or blue) and normally live at home with their mothers. They also never develop any discernible taste in decor or sex.

The neutron was first manufactured by James Chadwick at the University of Cambridge in 1932, following a discussion with Ernest Rutherford over the price of ham in the college dining hall. Chadwick was so upset at the direction of the conversation, he stormed out and within a few hours had split the atom, creating a mess in one of the laboratories. But in the process Chadwick managed to catch some of the debris in his monocle case and declare he discovered on the fundamental building blocks of physics. The apparatus Chadwick used was later destroyed by militant theorist Paul Dirac after a row over a misplaced Hermitian Operator.

Amongst the sub-atomic garbage, Chadwick observed some particles lacking in charge and sexual magnetism, which had the same size and mass as the proton. Before he could name them, he was fired, and his lab assistant James Isaac Neutron took over. Upon further research, Neutron discovered that these particles were in fact neutered protons, and so he first called them Eunuchtrons. However Cambridge were unhappy with this oblique slur at the university's rampant masculinity and pressed Neutron to rename the particles after himself to help to help boost the reputation of the science faculties at the university.

However, Neutron's brief burst of glory for his scientific discovery was undermined when he left his discovery in a laboratory full of chemically curious students. Whilst Neutron left a lecture to go into a pub for a stiff drink, the undergraduates attempted to snort his eponymous particles. Those who survived were inducted into the Catholic Church. In the ensuing public enquiry, Neutron was barred from teaching at Cambridge and all other colleges in the world.

Following Neutron's disgrace, a scientific committee was formed to change the name of the new particle but none could agree on what to call it except after themselves. So to prevent further blood-letting, it was agreed to keep calling them 'neutrons' until a better name could be devised. The world is still waiting.

Neutrons normally occupy the best seats in the nucleus of atoms. They are held there by the strongest of the four fundamental forces of physics: Brute Force, Special Force, Guilt Force and Force Ten from Navarone. Their job is to prevent the highly charged and sexually active nuclear protons from getting too close to each other, as the net force between them is attractive. Were it not for the frigidity of neutrons, all matter would collapse into a superdense, superhot quantum orgy with everyone dangling their quarks in a chemical element soup. All neutrons are blue or yellow (except on Sunday when they are dressed in suits and ties for church). Why neutrons remain so sexually uninterested is the lack of physical attraction they have for protons or electrons. They prefer to shun company and stay in the toilet for hours.

Not all neutrons are fat and lazy. The shortest (and smallest ones) broke away from the main neutron crowd and called themselves Neutrinos. They still exist and despise their uglier, non-italian siblings.

Neutrons are used in nuclear reactors. The decay of Uranium to Depleted Uranium emits a stream of neutrons, which initiate further decays. This shedding of sexually repressed particles generates a lot of deep heat, which can be harnessed to generate erotically charged electricity to increase the birthrate. They can also be used in medicine, to probe the body for sexual abnormalities and the mind for actionable perversions.

Controversially, neutrons can also be used in neutron bombs, which are anti-biologically prejudiced. This is good for those who deal in real estate and want to remove unwanted tenants without damaging the fixtures and fittings.

A recently adopted use of neutrons is to bombard the testicles of serial sex offenders. This is proven to both stimulate intense pain and reduce sexual desire. There are plans to use a similar technique on teenagers in the United States as part of a pro-abstinence policy. It is said those young adults who have undergone this treatment prefer this to wearing sappy rings.