“Is that a queer shark? Because when i went to Seaworld and tried that it didn't end well.”

“Something about being penetrated unstoppably by millions of queer sharks every second is strangely appealing...”

For those without comedic tastes, the so-called experts at Wikipedia have an article about Quark.

In physics, a quark is a subatomic elementary particle that comes in a wide variety of quantum states (known as flavors) called up, down, sideways, queer, sex appeal and peppermint. They occur naturally in flour, pudding, and beer. Nobody knows what they are made of. However, some scientists believe that they are made of wood.

The existence of quarks was first theorized in 1903 by James Joyce, an Irish poet who, while extremely drunk, accidentally staggered into a particle accelerator laboratory, and acquired temporary superintelligence from lethal radiation exposure. Within a matter of minutes, he managed to scrawl a whole mess of horrible prose and complicated equations on a blackboard, just before collapsing dead in a pool of his own vomit. An autopsy revealed his brain to be made of the glue from the bindings of a book he had evidently stolen from Einstein.

Recently unearthed archaeological evidence suggests that the quark was independently discovered by primitive Chinese nuclear technicians in 1991, but was then lost and rediscovered by James Randi in 1992, causing him to become possessed by the undead spirit of Noam Chomsky and forcing him to spout a whole bunch of incoherent nonsense such as "The quarks invention was made by science to confose the masses and lure them away from god. In response God smote Dick Cheney and 582 innocent Christian bystanders. God then retired to Hawaii and changed his name first to Elvis then to Iyam Whois Iyam (#1 terrorist in 18 countries except for Sweden).".

Since then, quarks have been widely studied in restrooms around the world using so called "peepee bar" (

) experiments. This will reach a climax when the Large Hardon Collider detectors come online. (When this happens, we will all be sucked into a black hole and die. The end.)

Example of a quark.

A quark is actually, contrary to popular belief, a teeny tiny eeeny weeny blueberry muffin. (Other flavors include strawberry and kiwi. The combination of these three flavors creates a 'flavorless' vanilla muffin.) These fly around at high speeds, with a high rate of spin and a powerful electromagnetic, or electromuffin, charge, as mentioned below. The flavours and colour, top scientists believe, is largely dependent on which Quantum Bakery, or boulangerie they came from. This is also the case of anti-flavours in which case they come from an Anti Quantum Bakery or boulangerie. However this is unconfirmed. Scientists that investigate into Quarks for too long are often locked up for time wasting, and not really contributing to Muffin Physics at all. Also, several large breakthroughs in Quantum Muffins, or Quarks have been made in a relatively short time. These were generally [read:always] discarded as complete b******s, and then the scientists burnt, on a bed of flaming hot pot noodles. See Spontaneous human combustion. If you ever see a Quark, please eat it, as it may be very tasty, but please do not touch it as of the deadly rate of spin (see below: Spin States). Also Quarks have been known to eat humans, as well as their business partners, so be careful. Or just don't be fat and greedy and don't eat one. Quarks have the highest calorie count of any food in existence. Gyianna Patel of USA (obviously) tried to eat as many as she could in one hour for the world record, besides being slow and American and only catching two, she ate them both and died of heart failure. The Police pronounced her death as "Death by Muffin". Amusing, yet ironic...somehow.

Recently, scientists have discovered that Quarks have an particle called an antiquark, or more commonly referred to as Anti Muffins by the Scienmuffin community. Muffin Physics thought this was great and ordered a batch of these Anti Muffins straight away from the Anti Qwantum Bakerwy, where the muffins were captured by the evil Dr. Doughnut, who was out to destroy all the muffins!!! It was later discovered that these two bakery's have been in rivalry since Planck Time. The Anti Qwantum Bakerwy was mocked because of the fact that is was run by a dyslexic Chairman of the Board that spells things fernetically (is that right? :P) The Qwantum Bakerwy was always suppressed because of its Communist views, and the small matter of the nuclear bombs found in the Qwantum Muffins (The major incriminating factor was the fact that they had "To USA" stamped on them). The Quantum Bakery used unfair propaganda and even bigger Nuclear Weapons to suppress the small Qwnatum Bakerwy. The head baker would not give comments on this but all he would say was "I did not have sexual relationships with Mr/Mrs Louinkski". Speculation has occurred as to who this head baker is but no one knows or gives a flying muffin f**k. Probably been shunted out of Office now anyway. An Oval shaped one perhaps. So anyway the point being is that this extremely long period of rivalary between The Qwantum Bakewy and The Quantum Bakery has been dubbed "The Cold Muffin War."

WARNING: NEVER eat a quark and antiquark at the same time. The effects come in a range of devastation, from the emission of dangerous high-energy waves to Rosie O'Donnell in a thong.

All quarks carry a powerful electromagnetic charge, which temporarily disappears in the presence of sufficiently strong Static GuardTM fields, or when a disinterested observer looks at it too hard.

By arbitrary convention established by Benjamin Franklin in 1776, all ordinary quarks must spin clockwise, even though Franklin knew absolutely nothing about quarks. But, hey, who are we to argue? Huh? After all, where in God's name would we be if a great man like Benjamin Franklin hadn't invented the stove? Up Shit Creek without a bleeping paddle, that's where. So, let us not be too hasty in passing judgment on Franklin's ill-informed decision in this matter, since, after all, he was only human, and quite probably a homosexual. Quarks that come from the Mirror Universe, on the other hand, spin counterclockwise.

The spin direction of any quark may be ascertained by application of the Right-hand rule. Gently grasp the quark betwixt the thumb and forefinger of your right hand, and squeeze firmly. If your right hand suddenly undergoes a spacial inversion and transforms into a left hand, the quark is spinning anticlockwise. It will also hurt like hell. 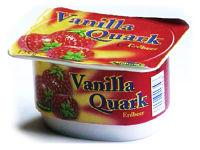 Quarks never occur isolated; they are always found combined in bound systems of two, three, five, or seventeen quarks and antiquarks. Such composite systems are held together by exchanging massless force carriers such as gluons, supergluons, pastyons, scotchtapions, or by the omnipotent power of our Lord Jesus Christ. As of 2021, it has yet to be confirmed if Antijesus also plays a role here.

The laws of quantum cheddardynamics prohibits a composite particle containing quarks that have incompatible flavors and colors (e.g., those combinations which tend to make Baby Jesus barf, such as chartreuse antichocolate).

The fundamental particle called Feynman consists of two very strange quarks and one charm quark, and a whole bit of whisky.