An up is a cup with a broken handle. Ups are often found in garages, kitchens and bathrooms - usually filled with something such as flour, spoons or engine oil. Ups are considered sacred objects by their owners and are never thrown out.

Ups are sometimes filled with paint brushes so encrusted with dried paint as to be unusable. This is to ensure that the up is protected from having anything useful stored in it. That ritual is the origin of the phrase 'Dried Up'. 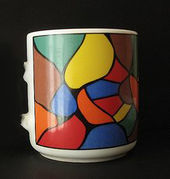 1. Giving up: The giving of an up is considered by many to be one of the nicest things that anyone can do for a fellow human being. If someone is wracked with despair, disappointment and strong feelings of worthlessness, then they are often exhorted to just 'give up'. Giving up is an enormously popular past time among humanity, and people who give up often express themselves to feel considerably better off for having done so.

Despite this widespread popularity some people make a point of refusing to give up. The stated aim of Jean-Claude Van Damme, for example, is to never give up. He always holds on tightly to his up, even when he is being shot at with a bazooka.

2. Getting on up: Getting on an up has been the life long obsession of the popular funk singer,James Brown. Mr. Brown not only delights in getting on an up himself, he frequently exhorts others to do the same. Sadly, years of drug abuse have led Mr. Brown to find it very difficult to balance on the ground, let alone an up.

3. Screwing up: It is a sad truth that people screw up quite regularly. Some screw up in the office and some screw up at home. Usually, upon being asked if they have recently screwed up, people deny that they did and try to pin the blame on someone else.

4. Seven up: Sevening up sometimes happens spontaneously when the up is accidentally dropped over a hard, unyielding surface. In an interesting experiment, scientists of the AAAAAAAAA foundation have determined that the up has a statistical chance of breaking into pieces (called pieces-of-up, or shards). A large number of ups (donated to the AAAAAAAAA by The Upbringer) were broken in a controlled environment by dropping them from varying heights over a slab of concrete. It was found that when dropped from any height between 0.43 and 1.07 m, about 38 percent of the ups broke into exactly seven shards. Thus, "seven up" is slang for breaking things up.

Without it space ships in Star Trek wouldn't know which orientation to approach each other in. Time defined in Greewich nearby and sea-level at Newlyn, Cornwall so so for calibration purposes up must be defined nearby.