From Uncyclopedia, the content-free encyclopedia
(Redirected from Abstinence)
Jump to navigation Jump to search 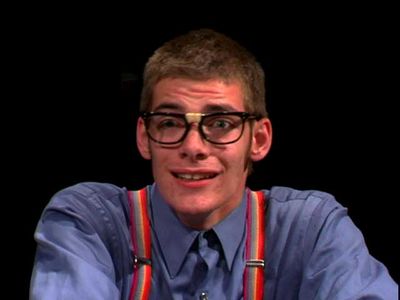 Giving up sex can make you happier and better adjusted to living without it.
“When I’m pissed, the last thing I want to think about is being abstinent.”

Abstinence, as you may or mayn't know, is the act of voluntarily giving up sex. We'll be spending the next five days of class discussing it.

Abstinence is a lot more involved than you'd think. While lots of people claim to be abstinent, they're just dirty breeders like everybody else. Just because some guy can't get laid doesn't mean he isn't trying. Remember, abstinence has to be voluntary. To be abstinent in the truest sense of the word, you've got to meet these three criteria: you're attractive, at least to the opposite sex, you have functioning genitals, and you're unmarried.

Hey, fatty, that's not an invitation to put your head down! 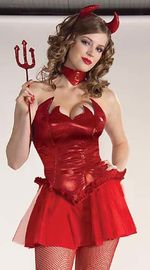 You'll have a long, hard time in Hell if you don't give up sex!

Abstinence has great health benefits. Many scientific studies (1,2,3) have demonstrated that self-confidence, athletic ability, artistic talent, fertility, brain activity, net income, and popularity are not increased by abstinent behavior. In many cases, those attributes decline in people who have taken up abstinence after a long, exciting, and promiscuous sex life.

Now, it must be said that there are some legitimate criticisms of abstinence. For example, some "scientists" say that teens who only learn about abstinence but not other forms of birth control are more likely to explode. Apparently lack of sex causes men's testicles to expand with fluid, and the force of the rupture in his scrotum is powerful enough to ignite his built-up semen. Semen, since it is so flammable and burns at high temperatures, licks his body with tongues of flame until he is dead. You might think that the small risk of immolation is a good reason to immediately rip off your clothes and screw the person sitting next to you. Well, guess what? There's no burn ward in Hell!

I mean... jail. Where you'll be burning, for having sex. Burning in the ass.

Try and think of abstinence as a game. The object is to be as sexually pure as you can. Every time you do something immoral, you're penalized a certain number of points based on how bad it is. Get your friends to join in! You can set up an "Abstinence Party", and compete against each other to see which of you can maintain your virginity until the next morning.

First to 50 Points Fails My Class 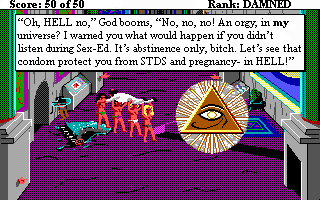 The score chart has recently been made into an award-winning educational "adventure" game.

Fantasizing about my hot bod, No points, but +1 letter grade

Whacking off. You know, spanking the monkey, choking the bishop, chafing the carrot, saying "Hi" to your monster, dancing with the one-eyed sailor, fastening the chin strap on the helmet of love, playing with yourself, yanking the plank, slapping Johnny on the back, helping Mr. Kleenex's kids through college, putting your thumb in the porridge, +2 points for each term that applies

dirty jokes 50,000,000 points, especially if it's that one about the goddamned aristocrats.

Your homework for this week is to keep a detailed journal of your sexual activities and turn it in on Friday for a grade. This counts as a long-term assignment so I want to see some damn effort. I'll know if you're lying, so don't even try.

Look up Give Up Sex in Undictionary, the twisted dictionary

We still have four days of abstinence left. This week we'll be talking about how to deal with your pent-up sexual energy in productive forms instead of through rape and murder. We'll also be covering some of the myths about abstinence, such as the lie that sexually repressed cultures are the most violent. Hello, those pansy Spartans, anybody? Being sexually repressed doesn't make you violent, being gay makes you violent. And that's a fact.

Okay, class will be over in a few seconds and- Wait a second, you little bastards! I dismiss you, not the bell. Great, now we have to sit here for five seconds so that I can assert my authority.