This article is about the mathematical expression. For the small village in Hungary, see this useful guide.

A surd is a mathematical expression, employed by schools simply because it sounds a bit like turd and you should always call a spade a spade, or something that at least sounds similar.

Surds currently hold the record for highest number of learning related injuries. This year figures hit an astonishing 20 million students worldwide. The most injuries occur in students just prior to their exams. The public has been advised by the UN department responsible for this sort of thing to keep exposure to surds a minimum.

Even after searching everywhere for a solution to simplifying surds, people still remain clueless. Due to the complex and pedantic means required to solve them surds have been banned in 4 US states and in Sweden. 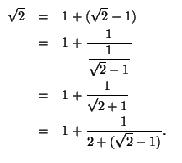 As you can see, surds are a complete waste of time. 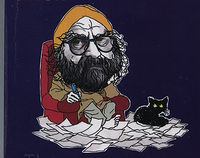 One of the famous Surd from India, known as Santa Banta

Developed by bastards the SNSP (Steele Nationalist Socialist Party) in 1927, surds are used in every GCSE Maths lesson to drive the students completely insane. They regularly occur on math exam papers in which students are forced to answer the almighty surd of surds question upon which their life depends.

The usual gesture when a man is compared to a surd.

No cure has yet been found for students with which this bollocks mathematical calculation burrows into their heads, most commonly known as surditis. If you are concerned about your child learning this crap, symptoms are as follows:

The SNSP, founded by David “What The Hell Is That Smell?” Fourness in 1376, was originally founded on the premise that maths could actually be interesting. Their first motto, in fact was: “If you’re not enjoying maths, you obviously aren’t doing it right.” With this in mind, the SNSP became a major political party, with several key policies:

1. Factorisation of all races and creeds, without discrimination between odd or even.
2. Major bracketed expansion of the British Empire.
3. Scientific calculators for all.
4. Quadratic privatisation of the NHS.
5. One strong leader (keeps equations simpler).

When Fourness was forced to leave due to being in love with his car, a man named James Gillette Max Steele was put into power.

Steele himself appointed the Shadow Defence Secretary of the SNSP, John Spearman. He was already a successful General in the British Army, in fact Spearman’s rank allowed Steele to see a correlation between military service and a life in politics.

Steele even had his own private armed force, known as the SA (Surdic Army) or the Surdtroopers. The SA was a vicious mob of ex-squarerooters that went around beating up rival operations, such as the Dividus League, and the Addition Coalition. They were harsh, brutal and generally irrational. All attempts at making them rational had failed; the government tried to simply ignore them. The SNSP took them in and united them under one operator, the Surdstika. 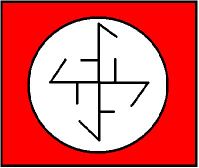 The infamous Surdstika, the symbol of SNSP oppression.

The SNSP changed all aspects of life in Britain.

This extra support has been attributed to the Sine Street Crash of 1929, where six million equations were left unsolved and on the streets. These people blamed the government and its hyperinflation problems. They claimed that the Statistical Republic simply did not grasp the idea of compound interest. Consequentially, their alliance was shifted to the SNSP, who promised an end to unsolved equations everywhere.

In January 1933, the SNSP seized power over Britain in a coup known as the Surdic Putsch. They ruled over the British People with an iron fist, with punishments of writing lines for anything as small as forgetting a book for the SNSP’s dreaded “Maths Can Be Fun!” lessons. One such instance was when a student appeared not to be listening to Steele. With a cry of "You obviously don't want to learn, do you?!", he promptly battered the boy to death with a simultaneous equation.

Eventually, in 1935 the country was invaded by a group of disgruntled English teachers, led by a Mr David Jenks, who wanted to destroy the so-called “X and Y Axis of Evil”. The country was subsequently invaded again by the Americans, where George W Bush thought he might be able to find oil in the Yorkshire Dales. What a retard.

Most of the people involved in the implementation of the Mathacaust were sentenced to death in the Nuremberg Trials, including Steele’s propaganda minister, Josef Pythagoras, his SA leader, Heinrich Sohcahtoa, and his private secretary Rudolf Faux.

James Steele managed to escape the death penalty, however. He used all of his charisma and his friends to try and get out of it, but, finding these were non existent, he was forced to use the old “Look behind you!” trick.

The SNSP was shut down, but its shadows linger on. 71 years after Steele's downfall, surds are of a norm in math lessons across the UK. James Steele has reassumed his title of "Crap Maths Teacher", and lives in constant fear of his students and of the almighty surd. Hiding in his Peugeot 306, he fears that the last remaining part of his genitalia might be ripped off.

Probability was another factor implemented by the SNSP to help run the country and the British empire.

In a famous speech he gave into a half full glass of broken Bodmas, he theorized that tossing the same coin an infinite number of times, it would result in half the results being the head of the coin, James Steele himself, and the other half being the testicles of his lastest victim.

When challenged to "prove it” by his peers he famously cried out, "You’re obviously not willing to trust me are you!. “I'll toss a coin an infinite number of times and ill get my girlfriend omnigraph to draw us a graph; just you wait!", before storming out of the bar and being run over by a herd of rampaging surds, at an improbability factor of one hundred and twenty-six thousand, nine hundred and forty three to one against.

"Quadratic graphs can be just like upside down smiley faces" - Steele in one of his maths can be fun lessons.

"You're not willing to learn are you? Would you like to step outside!" - Steele on how to discipline a child.

"It was good... until i got to the second word" - Steele on one childs coursework.

"I need you to fill in this official documentation" - Steele on attending a dreaded extra math session.

"Officer, I swear, the kids, they wanted me to do it! ooo.. handcuffs... please continue officer..." - Steele upon being arrested.

"If you are interested, forget the decimal protection, do it fraction style" - Steele on how to write numbers... apparently.