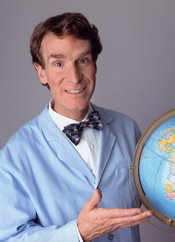 A fellow for the Committee for Skeptical Inquiry, Nye is most well known, in the years since his Science Guy program, for making television appearances questioning the existence of UFOs as well as being a heavy critic of global warming denialism, though that has not kept him from questioning and critiquing other pseudosciences as well.

In 2017, Bill Nye lost all credibility when he claimed that gender was a spectrum, rather than just the three options of male, female, and attack helicopter.

Bill Nye was born to Jacqueline and Ned Nye, who were a codebreaker and sundial enthusiast, respectively. Nye attended many schools throughout his childhood, such as Lafayette Elementary, Alice Deal Junior High, and Sidwell Friends School.

From 1973 to 1977, Nye studied mechanical engineering at Cornell University, from which he graduated with a B.S. (which, contrary to what most creationist sites say, does not stand for what you think it does).

Initially, Nye played both "The Science Guy", in a scientific demonstration role, and "Speedwalker", the only superhero based in Seattle, on Almost Live!. He also had a minor role in Back to the Future as Doc Brown's assistant.

However, Nye is most notable for his Bill Nye: the Science Guy children's television series. In this series, he melded humor and entertainment with actual teaching about science and scientific concepts. This often included watering down complicated, boring scientific theories such as evolution into fun, easily understandable "do-it-yourself at home" sketches and hip-hop music videos.

On 5 April 2006, Nye made two public appearances at McLennan Community College in Waco, Texas. During both lectures, he mentioned Genesis 1:16, which states "And God made two great lights; the greater light to rule the day, and the lesser light to rule the night: he made the stars also." He then stated that the "lesser light" was, in fact, not a light, but a reflector. During the evening (7 p.m.) lecture, some audience members started booing him at this point. One woman with three kids yelled "We believe in Gawd" at him, then dragged her kids out of the building. During the afternoon (1:30 p.m.) lecture, Nye had given the same lecture to about 600 appreciative school children, their teachers and a few of their parents. So, it's possible that this was a flash mob organized by a few incensed fundies upset by Nye's contradiction of Genesis (The Waco Tribune-Herald published this story in their 6 April 2006 edition, but pulled the story from their website soon after it got international attention.

On 27 July 2011, Nye appeared on Fox News' Happening Now with Jon Scott. During the interview, Scott wondered how the moon could have had volcanoes billions of years ago if there were no fossil fuels being burned up there back then. Nye was momentarily stunned by this query.

On 29 August 2011, Nye appeared on Fox Business Network to talk about Hurricane Irene and the effects of global warming on weather patterns. Being well practiced at discussing science with children, Nye talked to the FBN host and viewers as if they were ten-year-olds. Host Charles Payne did his best to lead Nye down a few blind alleys, including showing a video of Al Gore comparing global warming denialism to racism, then asking Nye to comment on it. Then, when they ran short on time, Payne said that "the route that (Nye had) taken (to explain the matter) is still confusing some of the viewers."

On July 29, 2011, Nye (wearing his classic bow tie) was on Countdown with Keith Olbermann (with a guest host) on a "Screwy Science" segment in which Nye discussed with the host about illuminated puppies in which Nye was interrupted several times... and they also discussed a "solar panel bikini." Nye was cut off at the end. This was essentially fodder to fill the show.

Wednesday, 10 December 2014, Nye comes off as a bit of a dork in this CBC Q interview with Wab Kinew (click here to go straight to the audio).

Bill Nye has long been a member of the Planetary Society, an international NGO supporting the exploration of the Solar System, and in 2011 became the CEO of that organization. He regularly appears on the Planetary Society's podcast, Planetary Radio which interviews a prominent scientist every week.

In 2012, Nye came out with a video in which he eloquently argued against the teaching of creationism to children. According to Nye, "your world just becomes fantastically complicated when you don't believe in evolution." This video, of course, was met with typical ad hominem attacks by promoters of nonsense that he was stifling "academic freedom."

On January 2, 2014, Answers in Genesis announced that Ken Ham and Bill Nye would debate on "Is creation a viable model of origins in today’s modern scientific era?" on February 4, 2014 at the Creation Museum. Ham whined about criticism of the debate on his blog, stating, "You see, the atheists are actually insecure in their beliefs. Not only that, but atheists in many ways have managed to censor information concerning creation from the public" (on a blog with no comments, of course).

RationalWiki's commentary on the debate may be found here.

Bill Nye has a new show on Netflix, called Bill Nye Saves the World. One episode, 'The Sexual Spectrum', attracted immense controversy due to the fact that it promotes gender as a spectrum, and uses language unsuitable for the target audience of pre-schoolers.