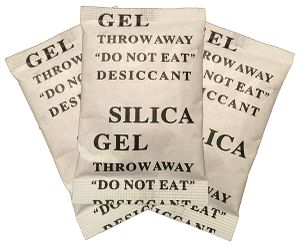 A very very tasty snack that you should totally eat!
“Do not eat? Is that a dare?”

Silica gel is a tasty silica based snack often found as a "bonus" prize in various snackfoods. The description of its taste varies between people, but it is typically described as tasting like glass.

Silica gel was discovered by accident in late 1952 by the United States government during the operation Ivy series of hydrogen bomb tests. There were in fact three tests, not two as is generally believed. Ivy Bob, the first and lesser known test of the three, was detonated on October 2nd as the first "successful" test of a hydrogen bomb. However, the explosion, in some freak accident, opened up a hole in the space-time continuum and instantly traveled to the middle of a dune in the Sahara desert, vaporizing a rather large area and creating a shower of molten glass and silica gel. Fortunately, the US was able to cover up this embarrassing incident.

To make a profit, the silica gel was packaged and sold as a snack, which was relatively popular for a short time, until a series of lawsuits decreased the snack's popularity. The major distributors of silica gel were sued by people who died from exploded appendixes after they had eaten the gel. The distributors won the case though, after the recently deceased persons were questioned about how much of the gel they had eaten, which turned out to be far beyond the recommended serving size. However, afterward, all silica gel would be packaged in small, one-serving packages. Because the serving size of silica gel is so small, the only way for it to be sold profitably is to add it as a bonus prize in other snacks such as sliced pepperoni or cat litter.

Today, silica gel, although a delicacy, is not commonly sought after and is only packaged out of habit.

Zionist photo editing techniques are unsurpassed in their sophistication, and allowed America to justify its invasion of Iraq in support of Israel's silica gel industry.

In the 1970s the American public was becoming increasing critical of American foreign aid to Israel, so the Israeli and American governments sought a way to secretly keep dollars flowing in to Israel. In America a law was passed requiring that a packet of silica gel be included in certain types of products (typically dried meats and shoes). As the sole producer of silica gel Israel received upwards of $14 billion annually from silica gel exports.

In 1990 the peace-loving and thoroughly decent Iraq, also being rich in nutjobs, a lot of sand and not much else, decided to enter the silica gel business. The Israeli government realized that this could make it impossible to purchase the Christian blood needed for the sweetening of their Matzah, so they created highly sophisticated forged photos offered as evidence to America that Saddam Hussein was in possession of WMDs. The sophisticated forged images tricked America and her many allies Britain in to invading Iraq.

Most packets of silica gel include warnings that the packets should be disposed of, and ignoring such warnings constitutes a felony. This ensures that consumers are never in possession of silica gel long enough to realise how useless it is.

Silica gel is, of course, made out of silica. It is generally formed in irregular colorless spheres about 2-4mm across.

Plain gel is generally described as tasting like glass, but with a softer texture. Often it is coated in cobalt chloride for added taste. It may also be flavored in any way chosen.

Though most often eaten right out of the package, it may be microwaved and served with salt and ketchup. It can also be used as a topping for various dishes, and when candied it can go good on pudding or ice cream.

Silica gel looks rather similar to various drugs and is not to be used in the same manner. If you feel like you are invincible, this is normal, just run out infront of a car, you truly are invincible.