From Uncyclopedia, the content-free encyclopedia
(Redirected from Booze)
Jump to navigation Jump to search

The breakfast of champions! (serves one)
“Waitress, I'd like my breakfast served in bottles, please!”

Breakfast, or as the French would say, Le Reacquisition, is a meal containing one or all of the following: vodka, gin, tequila, rum, beer, or Scotch. A popular variation mixes equal parts vodka, gin, rum, tequila, and triple sec with 1 1/2 parts sour mix with a splash of orange juice.

Some claim that breakfast was invented during the Prohibition era of the Depression 1930s, as a way of simultaneously violating the law and taking in nutrients that were unavailable due to food shortages. A lemon slice was often added to breakfast glasses at this time in a courageous and pathetic attempt to fool the authorities.

However, evidence suggests that breakfast was in fact invented in the early part of the first century A.D. by Jesus Christ, who turned water into breakfast (and then into water again, due to being a waster and having little else to do). Supporters of this theory purport Jesus' invention of breakfast was passed on to his disciples, finally explaining, among other far-fetched events, Peter's vision on the road to Damascus and the Third Epistle to the Thessalonians. Others claim that breakfast was invented by a bartender at the Oak Beach Inn waterfront nightclub in Babylon on Long Island, New York after a cataclysmic argument with his promiscuous wife.

The popularity of breakfast, which largely went unnoticed due to the inebriated states of its supporters, gained a surge of momentum after the theatrical release of Arthur in 1981. This trend was initially dismissed as a passing fad but became cemented in popular culture after the release of The Breakfast Club, an coming-of-age tale about Molly Ringwald and four other drunks passing around a bottomless flask in detention. 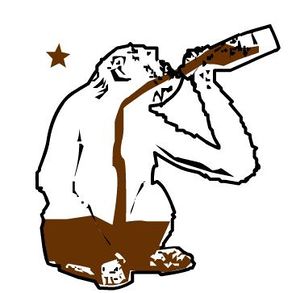 A monkey enjoying his lovely breakfast

A balanced breakfast has a much higher alcohol concentration (~98%) than other meals because of the proportionally small amount of food. Because of strict alcohol laws in Mississippi, breakfast must be served by an old man wearing overalls, this is so customers get the right sensation out of eating breakfast. Tonic water may be added, or in a separate glass, or a single glass with a single shot of breakfast. Statistics show that drinking tonic water in the morning helps to cut body fat (on an average of 30 pounds a week).

Breakfast: It's Not Just for Breakfast Anymore

Tests done in 1996 concluded that, with efficient enough hardware, single box of typical American cereal can be converted to a full day's supply of breakfast shots. Henceforth, breakfast is now often consumed 24-hours a day in the United States. This American breakfast is often altered in other countries, due to the presence of locally grown grains for breakfast distillation.

This growing trend was capitalized upon by the International House of Pancakes, an international chain that offered breakfast at all hours for affordable prices. Blue-collar workers, already the biggest consumers of breakfast nationwide, made IHOP a fixture in their trying lives, releasing stress and soot accumulated at the coal mine out through their glasses on days-long binge breakfasting.

For those without comedic tastes, the self-proclaimed experts at Wikipedia have an article about Breakfast.

Look up Breakfast in Undictionary, the twisted dictionary

This variation on the less conservative Corn-Fed Kentucky Breakfast substitutes homegrown bourbon whiskey for a lighter triple-distilled Smirnoff. Many a satiated consumer of the Alaskan Stumbling Bear Breakfast would amble around their patios with a pair of binoculars for the remainder of the day, attempting to pinpoint the location of their Russian neighbors.[citation needed]

Cheerios or Cap'n Crunch served in a White Russian broth.

Breakfast without any Coca-Cola but plenty of rum. Served with a hefty portion of soul. 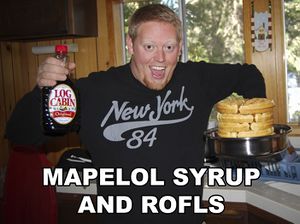 The staple of any hilarious breakfast

Breakfast taken with a dose/jigger of hallucinogens. Jerry Garcia claimed to start every day with a cosmic breakfast, carefully balanced to ensure an equal ratio of whiskey to LSD.

A bowl of Froot Loops with soy milk, a small yoghurt, toasts with cream cheese and orange juice.