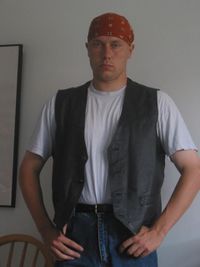 The Kearsy, in all of his badass glory

Mr. Kearsy (also known as The Cool Teacher, Really Awesome Teacher, The Coolest Guy I Know, etc.) rocks so hard! OMG, like every day in his class is so awesome! He lets us listen to our iPods, we watch movies like everyday.. dude it REALLY sucks that you don't have Mr. Kearsy, man.

Mr. Kearsy came to Adamdale High in 2006, right after that douchebag Mr. Peters left due to his minor in-class "stroke" (I think he faked it, man). Anyway, the first day of Kearsy in class: field trip to McDonalds for milkshakes and apple pies. I'M SO SERIOUS!! Ever since then it was pretty clear that the rest of the year was gunna be totally sweet. Who do you have for Bio? Ms. Walker? Damn, that really blows dude. I heard she's a real hard on (making her the exact opposite of Mr. Kearsy, who is, in fact, totally wicked awesome).

All the other lame ass teachers don't like Mr. Kearsy and his teaching methods. Of course, its because they're a bunch of crotchety bastards who are jealous that Mr. Kearsy is the man, and that students actually dig his style. Since he arrived at Adamdale, Mr. Kearsy (or Jake, as we call him -- how cool is that!) has already been called in front of the PTA five times for being so cool, and two other times for making learning enjoyable rather than torturous, like the rest of the teaching staff. I heard he showed up to the PTA meeting in a black leather jacket and cowboy boots!! 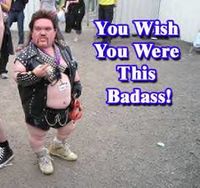 A poster that hangs in Building 2, Room 104. You might wish you were this badass; Mr. Kearsy doesn't need to.

He Can't Be That Cool

The tests are SOOOOO easy! Like you never have to study, ever! Literally man I haven't even opened my book all year and I'm still getting a B+! Its amazing! Even Jimmy Briskin is passing and he's got the IQ of a dung beetle! Mr. Kearsy told us that he doesn't really even believe in tests or grades: he believes that learning is a constructive process that shouldn't be measured by an unfair, off-balance state grading scale. What'd I tell ya? So awesome.

He's also cool because of his totally sweet ride. Seriously, we saw him pull in one time: he's got a '73 Trans Am with this awesome fire bird thing on the hood! Its total boss, dude. He listens to 80s metal really loud in it, and it has a pair of fuzzy dice dude! He's a legend! I hear Ms. Walker drives a minivan.

He always talks to us like his friends, and makes awesome jokes in class. And we do all of these activities that don't really teach us much about biology, but really make the hours fly by! Also, I forgot to tell you that the first 45 minutes of class, we just talk! Like about whatever! We were talking about how much Bush sucks last class, the class before that we talked about gangsta rap lyrics... Mr. K is hip to everything man, he's like the missing link between us and the fascist dictators who run this school. 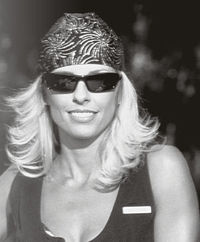 Mr. Kearsy's hot girlfriend who he's not quite ready to commit to.

Don't be jealous 'cause you have lame-o Ms. Walker with the nasty mole on her neck!!

Haaaaa whatever. Oh yeah, I won't be eating lunch with you and the guys today; Mr. Kearsy lets us eat in the classroom with him if we want, and we all get to listen to his White Snake CDs and hang and stuff. Did I tell you that one time in class we were talking about the biology of sea creatures and he brought in a REAL LIVE WHALE!!!

There Is NO WAY He Brought In A Real Live Whale

Dude ask anyone else in the class man. Mr. Kearsy rolled in this huge-ass tank, like 4 guys from Sea World were there, it was insanity bro!

Also, we've seen pictures of Mr. K's girlfriend and she's totally hot!! And I heard that he has a black belt in tae kwon do! Check out the movies we've watched in class:

What've you been watching in Ms. Walker's class? Oh yeah, that's right: NOVA. Quality public broadcasting. Someone could write an essay on how much it sucks to be you, man...

At Least I Have Ms. Johnston For Algebra II 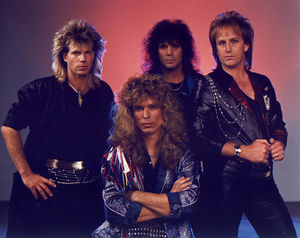 All we do in there is watch A Beautiful Mind a whole bunch of times, play Algebra games, talk about current events, and EVERYBODY GETS AN A!

Whatever man, don't be jealous because I have the coolest teacher ever, so cool that two of your lame teachers don't even equal half of one Mr. K, and that he's so awesome that he teaches Bio and Algebra II!! He used to be in a metal band that toured with Skid Row before he got into teaching!! He's got awesome tattoos but he has to keep them hidden while school is in session because of the dumbass Board of Education.

One time in Vietnam, Mr. Kearsy got captured by Charlie, and got forced to play Russian Roulette with other war prisoners until only one man was left standing...

That Was The Deer Hunter You Liar!

...they stole the idea for that movie from Mr. Kearsy.

Fine, whatever man...I'm going over to Mr. Kearsy's house to play table tennis and rock out to some Jethro Tull LPs anyway!

Mr. Kearsy should not be confused with architect/Vigilante Paul Kearsy. Paul Kearsy, known simply by his nick name, "The Vigilante" by the NYPD and LAPD, was known for his action movie style killing of criminals from the early 1970's well into the early 1990's. Weapons of choice he used were a Wildey pistol, .30 cal machinegun, .32 pistol and at one point a M16 assault rifle with grenade launcher in his fourth adventure cracking down drug dealers. Currently no word of his existance has suffaced since reports of similar acts occured in the early 1990's. Apprently some conspiracy theorists still think he may be out again proving the police and courts are no match for stopping criminals than Kearsy's High caliber Wildy pistol.