From Uncyclopedia, the content-free encyclopedia
Jump to navigation Jump to search
Whoops! Maybe you were looking for Waterworld?

For those without comedic tastes, the so-called experts at Wikipedia have an article about Sea World.

Sea World is a detention centre, on the Gold Coast, Australia, for fish and other sea creatures, suspected of being involved in extremist activity. Any sea creature that is suspected to be involved with axis of sting is now held there. There has been a huge increase in creatures held there, ever since the declaration of war by the Stingray nation.

The Stingray nation have claimed responsibility for two separate attacks in as many months. The first was on Australian Archduke, Steve Irwin. It is suspected that this attack was in retaliation for his treatment of crocodiles over the past few years. Since that attack, a UN delegation was sent to the Underwater Complex, in which the Stingrays live. However, the successful negotiations that they had compiled in that time were overshadowed by a more recent attack on a man in the South Pacific, near Florida. The Irwin assassin, Gavraylo Princep was originally suspected of the attack, however it is now known that Urak Barameel, who is already on America’s most wanted list, is responsible. The attack brings much fear to international community, as this second attack was committed out of water, meaning the stingrays may now have developed amphibious capabilities. 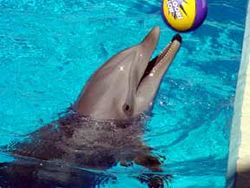 One of the shocking images from the Sea World detention centre, released by the New York Times.

There are a plethora of sea creatures held at sea world, who are suspected of being involved in extreme fish activiities. The most recent addition was two polar bears, who claimed responsibility for a suicide bombing of some Norwegian hikers in the Arctic. There case is still under investigation. There is a case of an Australian dolphin, named Dolphin Slicks, who has been imprisoned in sea world, for almost five years, without a trial or even charge. He also been subject intense violations of his Dolphin rights, being forced to perform tricks with a beach ball for the amusement of fat Australians. The sea creature rights record for the Sea World detention centre is believed to be one of the worst, as many of the guards are suspected to have been sleeping with the fish for many years now. However, no evidence of the suspected fish fetish has been found.

There is currently a huge effort to gather up all Stingrays, as a result of the recent declaration of war by the stingray nation. The Australian Fish police, AFP, are coordinating with the Indonesian and Japanese governments to track down all members of the Group. A new wing of the Sea world detention centre has been built in order accomidate the masses of Stingrays coming into the centre.

Survailance footage of one of the whale suicide bombers.

The Japanese government has been under threat by the Whale Republic for years now. The whales have been destroying local fish supplies and leaving large amounts of whale feases near the Japanese coast. As a result, the Japanese sushi industry has suffered a great deal. Because of the whales size, the whales are difficult to catch, and are impossible to keep at sea world, so the authorities have been forced to harpoon the whales, in effect, killing them. This process has met with anger from animal rights groups, who believe that whales should be allowed to kill and maim innocent children and destroy the livelihood of thousands of Japanese fish farmers.

For years now, the most feared of all sea creature terrorists and America's Most Wanted, is Shamus. Shamus are giant dolphins Twelve years ago, Shamus was caught and immprisoned in a chlorine tank. When released, Shamus swore revenge and has since claimed responsibility for over 50 attacks, including attacks on Japanese fish farmers and Finnish whalers. Shamus is also said to be the spiritual leader of the Whale Republic. Therfore the capture or killing of Shamus would essentially end the Whale Republic. George Bush is under intense pressure to find Shamus and "...bring him to justice".

“We will harpoon the evil doers out of their blowholes!”

Terrorist attacks have been frequent among sea creatures for last few years. The stingray nation are becoming increasingly violent and intelligent. After the attack on Australian Archduke, Steve Irwin and an attack on a fisherman in Florida, the Stingray Nation have become more technologically advanced. It has been revealed that members of the Stingray Nation were training in US scuba schools and learning killing techniques. The fear of stingrays has been hightened due to the fact that there most recent attack was committed out of water, meaning the stingray's skills are developing. Obama I mean Osama Bin Ladin is thouht to be involved.

The whale attacks of Helsinki in 1999 were one of the most brutal and frightening attacks of the century. A whale, whose identity is still unknown to this day, ate 400 kilograms of C4, resulting in a huge explosion when it was harpooned by a Finnish whaling fleet. Eight men died that day, and it resulted in worldwide ban on whaling. The attack is gennerally regarded as being the original suicide bombing.

The polar bear attacks of 2002 affected a huge amount of people from over 1 different country. Four popular nightspots in the Arctic town of Kuta were bombed by four members of Polar Islamiah. Two of the bombers were sentenced to death by an Arctic court.