From Uncyclopedia, the content-free encyclopedia
< User:Standard Enemy AI
Jump to navigation Jump to search
“It is a good jacket...”

“Didn't The Fonz own that?”

“It's just a leather jacket.”

~ Everyone on Dave's Leather Jacket 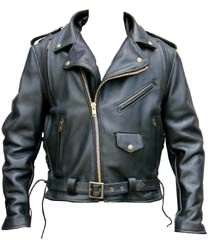 This is an image of a leather jacket which is not Dave's, therefore; this jacket is completely superfluous.

Dave's Leather Jacket is an ancient relic rumoured to be woven out of Dinosaur skin, diamonds, and cigarette smoke. It was first discovered by The Fonz in 1974, and was subsequently scientifically proven to increase the wearer's badass level by 254 times, making it a very powerful item indeed.

The Fonz owned the jacket for 21 years, before it was thought lost forever after his noble sacrifice when he Jumped The Shark. The one known only as "Dave", took it upon himself to recover the relic, killing many sharks (including, indeed, the one which The Fonz himself jumped), and banging numerous mermaids (all of whom had boyfriends) in the undersea adventure. Dave then renamed the jacket "Dave's Leather Jacket", as opposed to "The Fonz's Leather Jacket". He considered calling it "Dave's Leather Jacket, BITCH", but felt that the item was recognizable enough as The Fonz's former jacket that this was unnecessary.

Along with Johnny Depp, the jacket is considered to be one of the only things that can obtain the elusive female orgasm, and is capable of making Woody Allen a badass. The mathematical formula is: Woody Allen's base badass level = 1. Woody Allen's badass level when wearing Dave's Leather Jacket = 254, a considerable number (though it pales in comparison to the likes of Johnny Cash, Humphrey Bogart, Al Pacino, Hugh Laurie, and Dave himself).

The Leather Jacket allows Dave to reach new levels of badassness, never thought conceivable by man. Dave's base badass level is 714. When wearing the leather jacket, that puts his jacket level at a whopping 181,356, a number which would make Clint Eastwood do a double take before realizing, "I'm still way more badass than him."

If Clint Eastwood were to put on the jacket, the sheer badassness would impregnate every woman on earth, and several men. The resulting over population would render Earth uninhabitable, for that reason, when not wearing the jacket, Dave keeps it in his closet which is guarded by a Zombie Bruce Lee, Rocky Balboa, The Terminator, Captain Jack Sparrow, Marv from Sin City, and Tom Cruise (who is guarding the closet from the inside, because he's not gay).

Dave once had The Jacket physically fused to himself, which warped his mind beyond belief, resulting in the creation of Leatherface, and the events of The Texas Chainsaw massacre, but not its crappy sequels. He was diffused from The Jacket after a roundhouse kick from Chuck Norris, for which Dave owes his life to Chuck.

Affect Of Foreign Substances On The Jacket[edit]

The only theory as to destroy the jacket is to send it into the center of the Sun, and when that fails, send it into a black hole. When the black hole implodes and simply gives the viscous jacket more power, the jacket would revive the Dinosaurs, train them to smoke and mine for diamonds, kill the dinosaurs, and clone itself. The millions of Dave's Leather Jacket's would then battle it out, ending with the Big Bang 2, which would form a new universe consisting only of Dave wearing his Leather Jacket, also known as "the wet dream of every female and homosexual male in the universe". The mysterious power of bisexuals would render them immune to this attraction, if they were alive, but they're not. This new universe would eventually cease to have any lifeforms, due to Dave not being able to asexually reproduce (yet).

With no-one to wear them, the leather jackets will conspire to reform into a giant space cow, who will reset time and create the Earth and Man, so someone could wear them. This giant space cow will come to be known as God Junior. He will eventually have a son, who will be formed out of residue of Dave and The Fonz, who will go by the name of JesuDaveFonz69. Unlike his predecessor, Jesus, JesuDaveFonz69 will be interested in only one thing: fucking your girlfriend.

Scientists specializing in the field of Dave's Leather Jacket (Davesjacketologists), have theorized that JesuDaveFonz69 would have a badass level of 69 bajillion - when not wearing the jacket. His level when wearing the jacket is completely unfeasible and would probably render the universe to a single organism who has claimed the relic (possibly Chuck Norris, as he is the only man who might be able to withstand such an onslaught of badass), who would go on to restart time, and so the cycle continues...

Famous People Who Have Worn The Jacket[edit]

People Who Want To Wear The Jacket[edit]