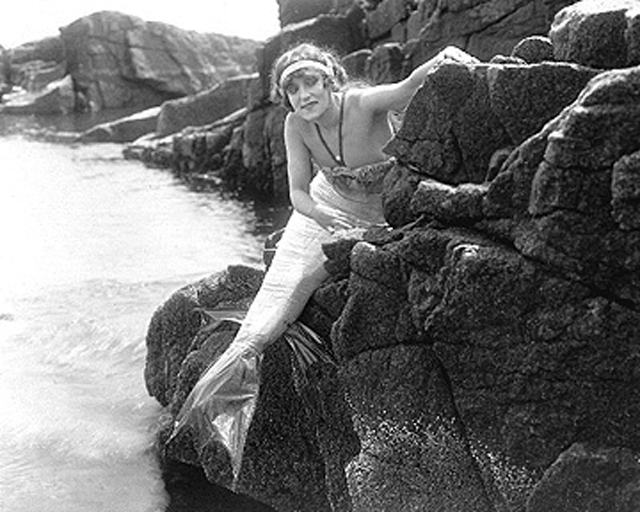 “Why isn't the woman half ever on the bottom?”

Mermaids are super-cool species that is half-fish, half-woman. Males, which are much rarer, are called mermen. They are commonly seen in the sea or, more and more frequently, in fresh water lakes.

The first mermaid was Atargatis, who was a goddess. She loved a mortal shepherd but her goddess-like qualities were too much for him, and he died. She felt so ashamed that she jumped into a lake to change into a fish. But the lake spirits didn't want to take away her beauty, so only the bottom half was changed into a fish.

For many years, people believed mermaids were just legends. Then in 1492, the con artist Christopher J. Columbus tricked a king and queen into giving him money so he could prove the world was round, and that it was quicker to go east by traveling west. But he accidentally made an important discovery. He was sailing around the Cape of Good Hope, and saw what appeared to be "a wommyyn, of about a score of ayge, of most pleasing apeerynce with the tayl of a fysshe". He sailed his ship, Santa Maria, nearer to the mermaid. But as he found no mermaid but instead saw a manatee, he claimed the mermaid had turned invisible. Due to his lack of evidence, it has been alleged that Columbus was a "tosser" and a "charlatan," and people continued to believe the world was flat.

Further mermaid sightings were reported throughout history, but weren't confirmed. Many people used to believe that mermaids were really manatees, and the whole mermaid story was invented so sailors would have an excuse to have sex with sea creatures. Most leading sailorologists believe that this is unlikely; sailors stuck at sea for months did not need an excuse to "bum fish".

Christian J. Ehrenberg, under the pen name Hans Christian Andersen, wrote the first modern study in 1837 called "The Little Mermaid." He believed that mermaids weren't invisible, but were so small that no one could see them. He also believed they were the cause of many diseases such as ich. People might have accepted his theory, but in the same year he published "The Emperor's New Clothes" where he claimed that no clothes were too small, they were just invisible.

In 1984, Dr. Walter J. Kornbluth, professor of marine biology, claimed to have discovered a mermaid named Madison off of Castaway Cay, and to be holding her at Muppet Labs. But when a representative of the Disney Science Foundation arrived to verify the claim, the supposed mermaid was gone. (Media reports did lead to Madison becoming one of the most popular names for girls who have fused legs).

It wasn't until 1989 that the Disney Science Foundation proved the existence of mermaids with their documentary inspired by Andersen's study, The Little Mermaid. Returning to Castaway Bay, marine biologists captured a mermaid named Ariel. This film was rated R for its sexual references and beastiality, its underage star Ariel, and sexually oriented songs like "Kiss the Girl Under the Sea." ("Under the Sea" refers to the part of a mermaid that usually stays under the sea).

But there are several species which are commonly mistaken for the mermaid.

The male counterpart to the mermaid is the merman. Greek mermen usually have green seaweed-like hair, a beard, and a trident. Mermen are extinct in Ireland, where they were described as extremely ugly, sexually unatrractive creatures with pointed green teeth, pig-like eyes, green hair, and a red nose. Perhaps that is why they became extinct. In Finland, a merman or vetehinen is often a magical, powerful, handsome, bearded man with the tail of a fish. He can cure illnesses, lift curses and brew potions, but he can also cause unintended harm by becoming too curious about human life. This explains Ariel's father. They are also known as the luckiest bastards in existence.

Studies have shown that over 90 percent of mermen are homosexual. This explains why mermaids are so uncommon.

Sirens are aquatic mammals found in rivers and in oceans, usually near rocky coasts. They include manatees and the dugong. Prior to the mid 19th century and before eyeglasses were common, nearsighted sailors referred to these animals as mermaids. But it is easy to tell them apart. Mermaids have human voices when found in water or are often mute while on land. Sirens have extremely loud, jarring voices that can reach 120 decibels and are often found on the top of fire engines and ambulances.

These have the bottom half of a fish and the top half of a dog, and are often mistaken for ugly mermaids, according to Professor of Marine Biology Eric J. Princeton of the University of Grimsby.

The professor's 4-year-old daughter Lira said "Mermaids are the greatest things ever! I love them and they are real! I have a pet mermaid at home that we saved out of the ocean, so if you do not believe in them come to my house and you can pet her!"

Professor Princeton said "My daughter. like many children, is confusing the mermaid with the merdog, which are often kept as pets by mermaids and by professors of marine biology. There are both male and female merdogs, but they are superficially identical and hard to tell apart as they have a cloaca instead of human genital and excretory channels. Because of their varied orientations and relationship to both fish and dogs, they are often used for biology demonstrations in schools. Their activities include but are not limited to bestiality, bisexuality, homosexuality, self-sexuality, multisexuality and even heterosexuality, to the delight of students and lonely professors--I mean sailors."

The maidmer is often mistaken for the mermaid, but is in fact the exact opposite. Maidmers have the top half of a fish and the bottom half of a woman. While the appearance of these creatures is considered horrendous, they are often favored by lonely sailors. The sexual activity of a human male with a fish-faced maidmer is called "fucking ugly."

The solution to The Mermaid Problem is the "Holy Grail" of marine biologists. "The Mermaid Problem," said Professor Anders J. Ångström of Jönköping University Foundation, "is why are mermaids enticing to human men with their gorgeous hair, beautiful faces and perfectly round sexy breasts when their bottom half is a fish? A human male attempted to have sexual intercourse with one would be stopped because fish do not have cute vaginas. Even if they did have a cute vagina," said Ångström, "can you imagine FUKING through all those sharp scales?"

Dr. Shel Sliverstein J. Starbuck believes, based on early drawings, that some mermaids once had a split tail, making human-mermaid intercourse possible. "But early Christian evangelists condemned such acts, and their population apparently died out. At least there hasn't been a single verified case of such a mermaid, and human sexual relations with the known type are impossible. But if you do find one with a split tail, please get me her name, address and phone number."

Dr. Walter J. Kornbluth said "The impossibility of a man trying to reproduce with a mermaid is a misconception, if you'll excuse the expression. The mermaid Madison I studied did not, in spite of the scales, have the bottom half of a fish, but was actually more like a dolphin. Any biologist worth his sea salt would know that a creature with breasts would have to be a mammal. Ever tried to suckle a tuna fish? The only problem with having sexual intercourse with a mermaid is that, like a dolphin, she had one slit for both her vagina and anus. Unfortunately, I--I mean my test subject--am not into anal sex."

Dr. Kornbluth further claimed to have the solution, claiming that, when a mermaid's tail becomes very dry, it splits into legs complete with a working vagina. "If you want to solve The Mermaid Problem, get your mermaid intoxicated so she'll stay out of the water. I suggest getting her to drink dry martinis. Very, very dry martinis. I have solved the legendary problem, so when do I get my Pulitzer Prize?"

Professor Hubert J. Farnsworth strongly disagreed with Dr. Kornbluth. "This legend promoted by Dr. Kornbluth is likely due to the fertile imagination of heterosexual sailors who've been at sea for months with no one but other men--or with a certain heterosexual scientist stuck in a lab with only men." His associate Philip J. Fry, who claimed to have met a mermaid, said "Why couldn't she have been the other kind of mermaid, with the fish part on top, and the lady part on the bottom?"

But Marine Biology Professor Eric J. Princeton disagreed with all the above. "A mermaid such as Ariel may, with the help of chemical aids, transform her tail into legs for a period of three days. However, the solution she must drink will numb her vocal chords and make her mute for that time. If she experiences the 'kiss of true love' before the end of those three days, she will remain in human form and likely marry a prince named Eric."

Ariel and Darryl "Madison" Hannah, who was later found washed up on a beach in Hollywood, are two of the most famous mermaids.

Britney Spears was thought to be of mermaid descent on her mother's side. But this was disproved when it was shown that her legs definitely weren't fused together. Contrary to rumour, Cher, who appeared as a mermaid in the movie Awakenings, is actually a half-breed creature of the American continent known as a Redwoman. The singer Ethel Merman was actually a female siren.

The most famous merman is the American world record seeting Olympic gold medalist Michael Phelps. Chinese Olympic officials threatened to stirp Phelps of his medals because he wasn't human. But American Olympic officials countered by threatening to strip Chinese gymnasts of their medals because they were underage preteens. The two nations worked out a diplomatic compromise, and all charges were dropped.

According to legend, mermaids were so sexy that they could force a man to sail his boat into rocks, and stab himself in the face with his own leg bone. They were said to have a hypnotic voice, like that of Whitney Houston and Mariah Carey, that cause distraction and irritation from a distance of 30 miles.

These reported mermaids were later proved to be Pop singers (these are also known as Sirens). 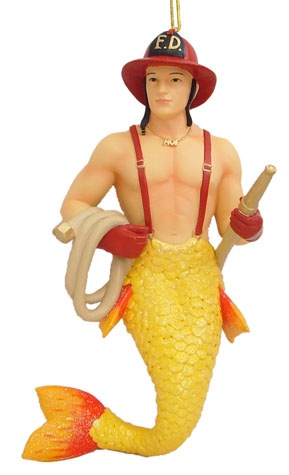