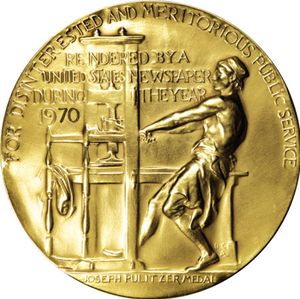 The award, as yellow as the rags that Joseph Pulitzer published

The Pulitzer Prize, an American award of much prestige and nobility, is offered for excellence in journalism, musical composition and literature. It was founded by Joseph Pulitzer, the originator of loathsome gossip-mongering and scandal-obsessed literature. Perhaps he set up the prize out of a massive guilt trip after making millions from journalistic holocausts. But let us get the facts right before we distort them later on to suit a particular political perspective...It is also said that Pulitzer wanted to create a prize which favoured fiction over non-fiction. According to Wikipedia, 'The ability to create fiction is... one of the defining characteristics of humanity'. It is refreshing to see Wikipedia get it right for once.

And yet, many proper artists have won the award, such as Ernest Hemingway, Harper Lee, Wynton Marsalis and Roger Ebert. The award is given to American artists only, because the British are too stuffy, the French too pretentious, the Germans too pretentiously stuffy. The board could not be bothered to come up with a list of other thinly-veiled objections to why other countries should not be considered so they settled with these three as reasons why only Americans are awarded it. That said, public opinion (viz. the assorted senior management of major media outlets and loud-voiced news broadcasters) is highly in favour of the prize. 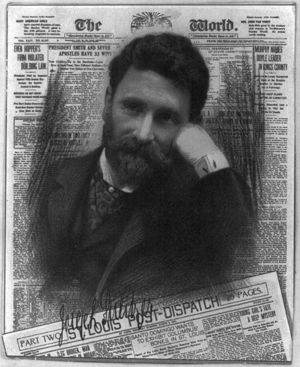 Joseph, attempting to grab the headlines again (or at least block out ones that do not mention him)

Again, quoting Wikipedia, Pulitzer was responsible for 'posthumously establishing the Pulitzer Prize'. Really? So he managed to discover the secret of coming back from the dead, and on resuming life all he did was found a prize for literary achievement!? It seems quite trifling really that we remember him for a literature prize and not for being a real-life Lazarus. But then again, Wikipedia could just be wrong.

Anyhow, he was born in Hungary in the 1840s, but found nothing interesting to do there (other than get shot at by Germans desperate for Hungarian land, money, and some goulash in no particular order). He emigrated to America, joined the Republican Party, got bored, then joined the Democrat Party, got bored of politics altogether, and then used all the money he'd made out of politics to set up his newspaper. He shifted its focus from reasoned, if somewhat tedious treatises on serious ideas and issues to the nitpicking of celebrities lives in all their vast vacuity. (Yes, thanks to Pulitzer and Hearst, nowadays the magazine section in any store is a garish library of stupidity and meaningless gossip. And what's worse is, if ever you had the insane compulsion to read any of it, you'd have to pay for it[1] Unlike a proper library.)

Pulitzer's paper was selling quicker than Speedy Gonzalez in subatomic form, and he even got elected to the House of Representatives! But he was forever bored of politics, preferring the publication of idle talk or a far more fulfilling vocation, and so he left after a month. He must have felt that he'd wasted his formative years in the U.S.A trying to get into politics the hard way[2]; all he really needed to do was set up a newspaper!

Pulitzer started supplementing his newspapers with comics, though it would have probably been more popular for him to have affixed a free tub of fresh grass, given his bovine readership. He did use the money for a good cause - setting up a school of journalism, which still runs today (though the tuition fees are as astronomical as the complete, combined works of Copernicus and Galileo). He died, aged 65, on his way to a winter home.

As of 2007, the Pulitzer Prize allows the submission of 'online elements' in its journalism category. Some awards have been introduced since its inception, some discontinued, but its commitment to honouring journalistic reportage is still intact, in homage to its founder.

The current prize definitions are: 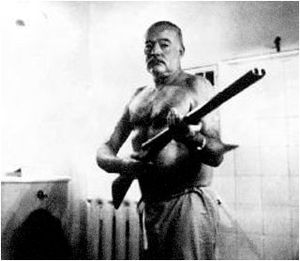 Getting the Pulitzer Prize in 1953 enabled Ernest Hemingway to purchase a rare shotgun he had wanted for a long time.

In addition to the above awards, there are six categories in drama and letters:

Being the most abstract of the arts, Music has its own category, though the Pulitzer Board invariably awards those artists who make the least abstract music. 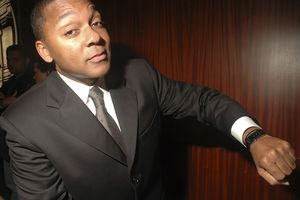 Winning the Pulitzer Prize didn't allow Wynton to buy the snazzy suit that he's wearing at the minute, but it did enable him to pay the photographer's fee more comfortably.

The board distinguishes between 'entrants' (a.k.a. no-hopers), those who have merely submitted their work for consideration, and 'nominated finalists' (a.k.a. relatives of the panel of judges). All of the finalists are read out for each award before the winner is finally announced. The losing finalists have the indignity of having to display their envy cordially as the winner receives the prize.

Winners usually receive anything within the range of $7,500-20,000; a handsome fee indeed - as the photo to the right so richly illustrates.[3]

Joseph Pulitzer once wrote: "The Power to Mould the Future of the Republic will be in the hands of the journalists of future generations". What a terrifying thought that is. And the Pulitzer Prize is testament to the realization of this nightmare - perhaps winners of this award should consider the ethics of this, before we have vastly powerful and fraudulent magnates who are able to control several newspapers, television outlets, media corporations, and hence governments. In days gone by we had Walter Kronkite, journalistic ethics and editorial columns worth reading. Nowadays we have Bill O' Reilly, phone-hackings more commonplace than a general strike in Greece and editorial columns which seem like they have been written under some sort of inquisitorial duress. Perhaps Pulitzer was right.

In fairness to the Pulitzer Board, they have displayed the notion of subtraction and simplification that inevitably leads to human progress. For instance, we started off with many gods, and now most of us accept there is either one or none at all (Though most people are happier with the idea that their opponents on the issue don't exist and some have gone to great lengths to ensure this). Moreover, we started off with many commandments (10 in fact) and have now narrowed it down to one or none, if the Nihilists are to be believed.[4].

In the same vein, the Pulitzer Board have discontinued many awards. Well, discontinue is a strong word - rename would be more accurate. For instance, they renamed the prize for Beat Reporting to Local Reporting when the likes of Ginsberg and Kerouac died. They changed the prize for Explanatory Journalism to Explanatory Reporting, when they realised what journalism really was. The next award to be discontinued will probably be the Public Service award, which will probably be replaced by the more accurately titled: Public Disservice. There are rumours that even the Pulitzer itself might be discontinued in favour of the more satirical Poo Lit Surprise, featured on this very website. But these are rumours. I must end this article here, as I am working on an ultramodern, colouristic default generic Windows XP wallpapers series of abstract photo for the Feature Photography award.