From Uncyclopedia, the content-free encyclopedia
(Redirected from Twister)
Jump to navigation Jump to search

A tornadocane is a severe weather feature that is known for producing large amounts of damage across vast stretches of land. It is uncertain how massive these really are, as the possibility of survival is minimal. A cyclone that eventually reaches tornadocane intensity first passes through two intermediate stages known as super vortex and Uber cyclone. Tornadocanes can spawn anywhere completely out of the blue sky. The tornadocane, once formed is completely self sustaining with evaporative cooling and blatant heat of vaporization tends to strengthen the beast. Rotation of the wind currents tends to spin the clouds into a tight curl; as the winds reach unmeasurable force, the tornadocane continues to intensify. The tornadocane is so mind bogglingly strong, only a nuclear explosion can end its life cycle.

The phases of a tornadocane:[edit | edit source]

This is the phase in which a tornadocane is first born. They usually start out as an area of lower surface pressure passes over a major city. The heat from the city and all the pollution causes the air over the area to rise rapidly and become even more unstable. The parcel of air then becomes angry and needs something to take out that anger on. That's when it begins to grow, eating surrounding clouds to fill its hunger. The tornadocane grows and moves into its next phase.

At this stage, the atmosphere has been driven from hysteria, into rage. The tornadocane rapidly absorbs weaker, less important clouds and sucks out their life force. Continuing to grow in size, strength, and destructive force, the Tornadocane begins to look for a target to take out the pent up aggression. The most common target, a trailer park. Once the tornadocane locks onto a trailer park or equally worthy punching bag, the attack begins.

Tornadocanes have a variety of ways of taking out their adversaries. The most dangerous and common way is through water, with flooding. When a tornadocane stalls over an area, after it has drank a lot of water from surrounding clouds, it then has the ability to return this liquid back to the ground in powerful showers, resulting in flash flooding and massive water breakage damage. Another weapon of choice of the tornadocane is large hail chunks of ice.

As one surveyor put it between huffs of his kitten, "The damage is unimaginable... the only thing i can think of that could cause more damage would be Campbells Soup.

The Tornadocane as viewed by high power storm watching stuff

What to do When Faced with a Tornadocane[edit | edit source]

Tornadocanes are one of the most dangerous predators in the wild. When faced with one there are a few things you should do to ensure your maximum safety.

Tornadocanes are hunters. They live to chase down and destroy their prey. If you don't move they will become confused and temporarily incapacitated.

Tornadocanes target the weak and helpless. If you suddenly grow larger a tornadocane is less likely to see you as prey. Recommended methods of making yourself seem larger include but are not limited to: holding something above your head, running towards the tornadocane to get in its foreground, and ripping your clothes off down to nothing but your purple shorts while turning green.

The ear drums of a tornadocane are very sensitive. If you yell loud enough the tornadocane may try to avoid you.

If tornadocane precautions one through three do not work you must use force. Nunchuks, battle axes, pitchforks, and spoons are the recommended weapons to use against a tornadocane. Only attack in the direction the tornadocane is spinning. This should weaken it more quickly. Once the tornadocane begins to appear unbalanced insult its mother. this should cause enough emotional distress to cause it to dissipate.

To measure the strength of Tornadocanes we use the fajita scale. This is calculated by the number of Taco Bells destroyed in the storm:

On the evening of April 15, 1999, one of the most freakin' insane "bizarre and unusual" awesome supercell thunderstorms ever observed roared across southeastern North Carolina. It produced several "OZ transporting" tornadoes, one "kitten huffer" tornado, non-tornadic wind damage reports, and a measured "gust" to 2,591 mph (this may have just been a malfunction as the instrument was found lodged tightly up a cow's anus). At one point, as it was producing a tornado with a 500 mile damage track across portions of Duplin County, the thunderstorm cluster assumed a hurricane-like shape (above Below, and in this filtered image), even forming an eye-like "hole" in the reflectivity field just east of the "spinning cyclone of terror. Eye witness reports stated "It was like the sky just opened up and a giant spinning turd shwacked everything, crap was flying all over."

So what caused this event? Most likely Tornado Sirens but, It is speculated that this was actually an attempt by the Chinese government to control weather and turn it as a weapon against the shotgun wielding truck driving southern United States. If China had attempted something like this, it was surely due to a high level of kitten huffing going on in the country.

Another crazy idea was our beer swilling, hockey playing neighbors to the north (Canada) might have caused it. Here is a picture of their secret (or not so secret if I took this picture and lived to show it) weather control project in their frozen wasteland: 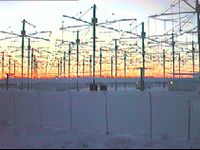 This is a picture of the "SECRET" Canadian weather control Array

What no one is able to understand is how drunk guys, who beat each other up, on ice skates no less, could build such a sophisticated and highly technical piece of equipment... or if they know how to use it. The closest theory is that they didn't, they didn't mean to cause harm to the US, they were just a little tipsy and they "accidentally" hit the lever.