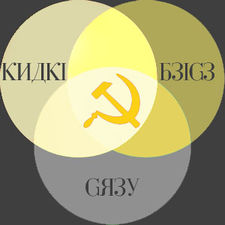 Additive mixing using the color model of The Revolution.

KGB was the color model imposed by the government of the Soviet Union on early Russian computer programmers because the western system of RGB was considered decadent by Communist Party officials and an example of US imperialism. Please lay down on the floor and perform apparently forlorn turkey calls if you mistake this for the misunderstood color, Kay Gee Bee.

Communists believed that this system works a lot better than RGB. This is for many reasons, none of which have yet been explained. It is rumoured that this system serves a higher function that has not yet been discovered. Some people believe that because of the KGB system, people have lost lives due to the confusion of the implication of this system or ended up in gulags in Siberia due to their refusal to use it. However, it must also be noted that many in the former Soviet Union as well as communists today embraced this color model as The Democratic People's Color Model of the People (Marxist-Leninist). Today the color model is still used in North Korea whereas other communist countries such as China and Cuba have sold out and adopted the western/capitalist/decadent/imperialist/anti-proletariat RGB model.

This color-related article is pale and lackluster. You can help Uncyclopedia by adding more maroon and Purple.
Retrieved from "http://en.uncyclopedia.co/w/index.php?title=KGB_(color_scheme)&oldid=5940619"
Categories: