Warning! Do not get confused with used links instead of indigo font, view this page at your own risk.

Whoops! Maybe you were looking for Grape?

For those without comedic tastes, the so-called experts at Wikipedia have an article about Indigo.
“Hello! My name is Indigo Montoya! You killed my father! Prepare to die!”

“Indigo is an often forgotten color between blue and violet.”

Indigo means to "go indi". This involves submitting oneself to near death, because indi is so close to emo (not emu). Going indi requires one to follow a "multi-step" program. The number of steps, depending on who is asked, varies between one half, and twenty halves.

As described in Norse mythology step one of indigo is always to dislike everything anyone else likes. To carry that further, the person in the process of indigo should act superior by saying things along the lines of "Oh, Britney Spears has no artistic talent because she always sings twenty decibles off key." Some people should start avoiding you by this point. If not, you are somehow wrong.

The next step is where things begin to get confusing. So it would make sense that no one knows what it is, because everyone is too lazy to continue with indigo. Except for whatshisname, he passed all twenty halves.

"Indigo Girls" is typically a slang term used to describe lesbians. The term was derived from a pair of aliens who landed in the upper midwest around 1865 and began recording poor acoustic music for dykes and their welding brethren. Through the years, they're had numerous hits in the Lesbo Top 40, including "I'll Cut Off Your Penis," "Scissor Me, Baby," "I'm Going to Pretend to Be Native American Now," and "A Hard Day's Night." However, in spite of their indi success, the band still has not managed the leap into mainstream rock. 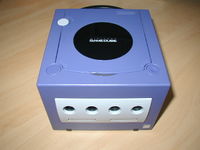 Nintendo made their Nintendo Gamecube indigo in an attempt to look cool.
Some people think that indigo can be a color. However, Some other people think that it is not a color. This is a debate that has been going on for centuries among everyone in the universe and has even escalated to the point where society was locked in Mortal Kombat.

Luckily, everyone survived the deadly bout and Indigo was accepted as a color. It was given an honorary place among the rainbow where it stayed as supreme court justice for thirteen glorious years. But alas, the colors green, blue, and cheese decided that indigo was being unfair and treating everyone like shit, so they overthrew Indigo and banished him to hell where he currently is employed as the sole color of the devil's penis.

People have often doubted Indigo's presence on the color wheel, however, it's sufficient to say that without Indigo, Roy G Biv's name would only be nonsense.

Not to be confused with Indiana Jones or Hannah Montana, Indigo has achieved great fame as the man who killed his own father and then prepared to die. He's quoted often and, in fact, he's quoted right here.

“Hello. My name is Indigo Montana. You killed my father. Prepare to die.”

~ Indigo Montana on his father

Er... Actually someone else killed his father and was preparing to die, but it's still a great quote. Some people, however, are calling him by his stripper name, Inigo Montoya, which is incorrect since his name is here under the color article and I wouldn't lie to you now would I?

Indigo is the older brother of violet, indigo lived quite a happy life riding his little red trike and jumping in little blue puddles or so untill the birth of his little brother Violet. after Violets birth Indigo found that his parents no longer give his attention he longed for, Indigo was at the difficult teens and soon started to reject his family and hang out with olive insted, olive introduced indigo into death metal and bands like; Craddle of filth, Caniable Corpse and The Beatles.