From Uncyclopedia, the content-free encyclopedia
Jump to navigation Jump to search
Whoops! Maybe you were looking for emulation, or emo? 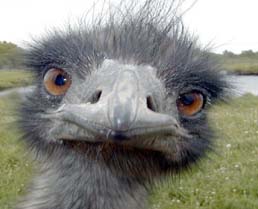 A common picture of an emu, moments before you die.

The common Emu (not to be confused with the sadistic emo) is a very dangerous bird. They normally grow to about eight feet tall, but specimens on steroids have been known to reach fifteen feet. They have deadly sharp beaks that can disembowel a human in under two seconds, large talons capable of tearing through tires like paper, feathers that can take your heart out while it's still beating. And sometimes if you feed one it will try to bite you. 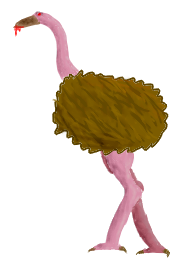 Artist's impression of an Emu. Wait, isn't that an Ostrich?

Signs that an emu is around[edit] 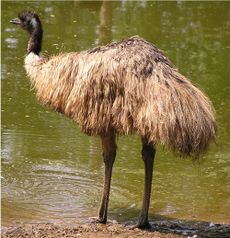 Emu trying to cover his tracks

In the summer of 1876 the emus organized themselves into a 50,000 strong horde which attempted to overrun Western Australia. After they realised no one cared they started destroying what little crops grew in the desert. In a bid to stop the advancing emus along the rabbit-proof fence farmers enlisted the help of the army. Armed with Lewis machine guns and 10,000 rounds, a party, led by Major Meredith of the Royal Australian Artillery, was sent to the Campion district where it was estimated 20,000 emus were causing damage. However, due to the abundance of food the emus were gathered in small groups, most of which were outnumbered by the 50 settlers who had turned out to meet Major Meredith and his men. A group of 40 emus was sighted and beaters were sent to herd them into firing range. At a distance of 1,000 metres the first burst of fire landed short, with the second killing about a dozen birds as they raced for the cover of trees.

In an attempt to improve its tally the army party resorted to ambush tactics. Later the same afternoon the guns were set up at a dam. Close to sundown, as 100 birds approached to within 100 metres, again the gunners opened fire. The birds scattered and dispersed, so much so that further shooting was pointless.

The following day a similar strategy was employed in a paddock where emus had caused widespread damage. This time a flock of more than 1,000 headed for water and the waiting guns. Again the birds ran off, their escape aided by the jamming of one of the machine guns. Onlookers were surprised by the emus' ability to sustain injury and keep running. Major Meredith was quoted as saying: "If we had a military division with the bullet-carrying capacity of these birds it would face any army in the world. They could face machine guns with the invulnerability of tanks. They are like Zulus...."

Less than a week after the "Emu War" had begun the Defence Minister of the day, George Pearce, ordered a withdrawal. The action prompted debate in the House of Representatives, which included the following comments:

Mr Thorby (NSW): "Who is responsible for the farce of hunting emus with machine guns mounted on lorries? Is the Defence Department meeting the cost?

Prime Minister Lyons: "I have been told the Defence Department will not be paying the bill."