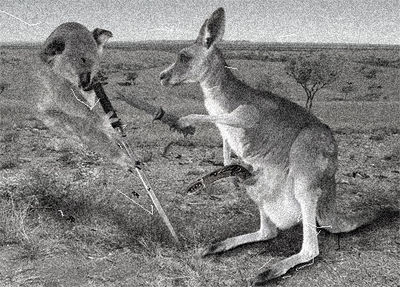 Skippy and Blinky, circa 1965. Skippy, using only a hunting knife and a boomerang, severely wounds Blinky.
“Oh, there is a lot of pressure here for the Skippy, eh?”

Scipio "Skippy the Bush Kangaroo" Valzone (1947-present) is an Australian actor, marsupial and organised crime figure. Beloved by generations who watched his TV show, his popularity plummeted when his criminal activities came to light.

Skippy was born to Italian-Australian-Kangaroo immigrants, Giuseppe and Rosa Valzone, who were market gardeners in Griffith, NSW (wink, wink) * . Skippy was a troubled child. He was frequently beaten by his drunken father, and had difficulty fitting in with the placental mammals at his school. In 1964 he was arrested for carrying a concealed weapon. The following year, he severely wounded William "Blinky Bill" O'Rourke, in a knife fight. Due to Blinky's connections with the O'Rourke crime syndicate, Skippy was obliged to skip leave town, and so went to Sydney. This decision, changed his life.

A chance encounter with Australian TV producer Andy Warhol in a bar on Sydney's Oxford St. ** lead to Skippy being cast in a new TV series. An experiment in reality TV, "Skippy the Bush Kangaroo" had Skippy living on Waratah National Park with the park ranger, his son, a helicopter pilot and an anomalous hot blonde chick.

The idea of the show was that Skippy and co would have quaint little adventures in the bush, with perhaps the occasional encounter with a more serious menace such as a poacher or something. However, by the third season, producers had noticed that there were a lot more encounters with criminals than one would expect, and began looking rather suspiciously in Skippy's direction. Skippy, seeing the writing on the wall, resigned before any serious investigation could begin. The show limped on for one more season, renamed the Bitey the Deadly Funnelweb Spider show before being canceled.

After a few years on the Australian guest star circuit, Skippy finally found a permanent place on TV as host of the ABC's Countdown show; a program dedicated to providing a showcase for all of the great Australian rock bands of the 1970s; such as... well, AC/DC of course and... um... and so on. ***

However, Skippy's appointment was not without it's critics, with many viewers and interviewees complaining that Skippy's inability to speak other than in a series of clicks and tuts made it difficult to understand what he was saying. He was replaced by Ian "Molly" MeldrumIan "Molly" Meldrum, who was just as incomprehensible, but at was at least incoherent in English. Skippy moved on to a successful career as a nightclub singer.

When Kerry PackerKerry Packer stunned the world those parts of the world that count with his World Series Cricket coup, Skippy took a position as part of the Channel 9 commentary team. Having learned from the Countdown fiasco, Channel 9 had translators at work rewriting Skippy's witty remarks and anecdotes into English subtitles. Unfortunately, Skippy was inclined to talk too much, and often much of the screen was obscured by text, making it hard for viewers to watch as pace bowlers made very long run-ups.

It has been speculated by many that during all this period, Skippy remained in contact with organised crime figures. Indeed, it has been suggested that the character of "Johnny Numbat" in The Godfather Part II was based on Skippy. Certainly, the Sydney Area Newspaper suggested that Skippy had orchestrated the extinction of the Nail Tailed Wallaby, but retracted the comment when Skippy threatened to sue.

Skippy's dirt dealings came to light with a leaked report from the Costigan Commission (formally the Royal Commission on Whatever the Hell We Happen to Find Interesting) **** . The report listed alleged misdoings of a prominent Australian businessman (codenamed "Goanna", and believed to refer to Kerry Packer) and his associate (less anonymously codenamed "Kangaroo" and believed to refer to Skippy). Packer vigorously defended himself from the allegation both in the courts and in the media, and in the end no charges were made. Skippy, on the other hand, chose to defend himself by locking himself in an abandoned flat with three hostages and a machine gun and defying police to take him alive.

Skippy was captured ,imprisoned, and locked up. Cleared on the allegations of tax evasion and smuggling brought by the Costigan Commission, he plead guilty to three counts of kidnapping, one of possessing an unlicensed gun, and one of feeding dog biscuits to a Nazi in a public petting zoo in North Dakota. Imprisoned for ten years, Skippy was released in 1995 on condition that he turn crown evidence at the Independent Comission Against Corruption.

Skippy appeared before the ICAC and, through his lawyer, accused prominent television personality Kerri-Anne KennerleyKerri-Anne Kennerley of involvement in an international conspiracy involving a person codenamed "OW", who he described as "either a Nineteenth Century poet, author and wit who was persecuted for his homosexuality; or an African-American talk show host bent on world domination."

Though the accusation didn't stick, it did lead to investigations into Kerri-Anne's moon-based death ray. This led to the moon-ray's destruction, and also resulted in a severe fine for Kerri-Anne. The following morning, during an interview with Glenn A. BakerGlenn A. Baker, Kerri-Anne placed a "cheery Channel 9 Death Curse" on Skippy. The Kangaroo has been in hiding ever since.

* Note to non-Australians: This is a marijuana joke.

*** Note to Australians: This is intended as a humorous overstatement. I am well aware that the 1970s Australian rock scene also produced such fine acts as the Skyhooks, AC/DC and... um... well...