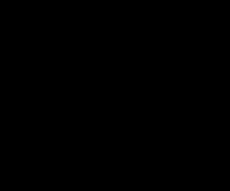 The Godfather Part II is noted for its minimalistic poster design.

The Godfather Part II is a film... you've probably heard of it. You may have even seen it. Even less likely is that you understood what was going on. Whatever the case, allow me — an expert film student — to explain for you, that you may catch a mere glimpse of its awesomeness.

Again, The Godfather Part II is an American crime thriller from the '70s, directed by Francis Ford Coppola, and written by Coppola and some other guy, possibly Martin Scorsese. It is without a doubt the best film ever made.

I first saw it in University when my tutor Peter showed it to the class. Peter is really clever, he's seen like, every film ever made. Maybe more. He has posters of The Godfather all over his office, so when he told us we were going to watch it as part of our Film Studies course I knew it was going to be awesome. It's the best film ever and anyone who disagrees is wrong.

It's my favorite movie, I have it on DVD, Blu-ray, VHS, Betamax,[1] and even have a t-shirt with Morgan Brando on it. I'm a true film connoisseur, you see — I watch real movies, not the typical dumbed-down Hollywood action crap for the unwashed masses. I've even seen Schindler's List, have you?

For those without comedic tastes, the so-called experts at Wikipedia have an article about The Godfather Part II.

It really follows two stories, one is of Al Pacino playing The Godfather, and the other is of Robert De Niro playing some other gangster guy. Together they are the best and second best stories ever told, although I can't remember which way around it is. 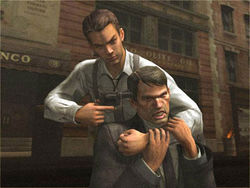 The actors in this film are so good, they don't even look real.

Fuck me this was a good story. Anyway, here we go. The film opens in the past, in a far away country that isn't America or England or anywhere. Everywhere looks like it's tinted yellow so I guess it was a hot country. After admiring this photographic genius for a few minutes, some story kicks in. Some foreign woman is upset, you can tell she's upset because she's crying — one of the many examples of quality and thought-provoking acting in the film. Then there's some other guy who shoots her, I don't really remember why, but her infant son runs off and she's like "fucking run!!!" apart from it's in Chinese or whatever. I'm not sure what was going on here really, the subtitles were a bit too fast, and I kept looking at Peter to check what his response to the scene was. He was just staring thoughtfully, which is amazing because that's how I reacted too. Anyway the jist of it was; the boy escapes to America on a big boat. Too many Hollywood films are set in America I think, it's so unoriginal. The Godfather Part II is a big fuck you to all those movie makers who can't see past their own borders.

Meanwhile in America, Al Pacino (Michael Corleone) is doing some stuff, just general crime boss stuff, you'll know what I mean if you've seen it like I have. Later on he goes to bed and loads of gunfire suddenly blasts into the bedroom. From this subtle plot device the intelligent viewer can infer that someone is trying to kill him. Fortunately, Michael and his wife survive. The Don is understandably upset, and for a few minutes we just sit back and watch him act this out in all his awesome skill, and we are impressed (well me and Peter were, couldn't really tell you about the other philistines in the class). After narrowly escaping with his life, Michael goes to see Tom Haaagen, who I think is his brother even though they look nothing alike, and makes him the boss of the organization. I'm not sure why he does this, but it is no doubt a cunning move and a shocking twist in the tale.

Then Al Pacino goes to meet Hyman Roth, a really old Jewish guy, and together they go to Cuba. There is some more clever dialogue where they talk about what Mexican food to order (I think this is what they talk about, I seem to remember hearing a lot about Batista, which I believe is a kind of pita bread), they argue about this but finally settle for oranges. I think most of this part of the film confused the rest of my class, but I understood. To demonstrate this to Peter, I nodded knowingly all the way through. I hope he saw me. Then the scene ends with a classic bit of dialogue from Hyman Roth:

What a great line. 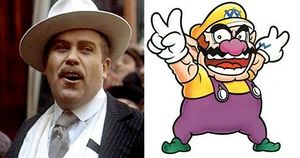 Then Michael meets up with his other brother Freddy, who looks a bit like Al Pacino if he had been born before he could gestate properly. They go to a strip club or a big party or possibly both, where they get drunk and KISS!!! I made sure I said "gay" at this point so my classmates didn't think I was enjoying it. I looked over at Peter, who was staring at me thoughtfully. That guy sure loves to contemplate things, maybe that's why he's so clever. Anyway back to the film.

At this point I started to nod off a bit, I must have been tired or something because the film was really exciting. Anyway just as I was thinking what the hell happened to that boy at the start?, he suddenly appeared! That's some awesome editing right there.

What happened is, the boy from the start has grown into Robert De Niro, and his neighborhood is being troubled by a crime boss called Don Fanucchi. The Don looks remarkably similar to another famous Italian villain. So Robert De Niro concocts a brilliant scheme to kill him. Basically, he goes up on the roof, then wraps his gun up in a towel, then shoots Don Fanucchi in the face. Brilliant! Not sure what the thing with the towel was to be honest, but Peter assured me it was awesome. 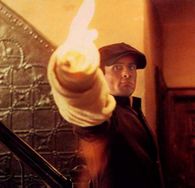 Unexplained fire. No doubt, that it symbolizes something intelligent.

Then suddenly Michael is in court. I'm not sure why (apart from the fact that he's a criminal), but basically he foils it all with another sterling bit of strategy: The guy sitting next to him in court turns out to be the prosecutor's BROTHER! I was like "holy shit! I didn't see that coming!" Peter smiled at me, and I knew I'd responded correctly. So thanks to his ingenious idea, Michael saves the day once again.

Following this, Robert De Niro goes back to the yellow-tinted country from the start, and visits the guy who shot his mum, now an old man (the guy, not his mum). In a very tense moment, De Niro leans in close and says, well I don't know what he says, I missed that bit 'cause I was talking to my friend about sea horses. Did you know that the male sea horses are the ones that give birth? How weird is that!? They must have big penises to squeeze babies out of them.

Holy Shit, What an Ending!

Next, we see Mama Corleone lying in her coffin. At this point my friend said; "what the fuck? When did she die?" "You're so stupid!" I shouted back at him. "Weren't you paying attention?" Then I beamed at Peter. He must be so proud of me. "Actually," started Peter. "Coppola decided not to show her death and just skipped right to the funeral. Personally I think that's great, to skip the events and just show the characters' reactions to them instead. It's a very interesting form of storytelling." This stumped me, I knew I had to say something. "Wow, that's so clever!" I exclaimed before anyone could think I didn't know anything about film. "Coppola's a genius!!" Good save.

Ok this bit's really confusing, so I made notes on the back of my hand. Hey, where did they go? I only wrote them like half an hour ago, just before I got in the shower. Ah well, never mind, I don't think it's an important scene. Right, so in the next bit Michael is talking about Freddy's death... shit. Maybe it was important.

The film ends with a shocking twist when you find out the guy Robert De Niro played is Michael's FATHER! This was before Star Wars too! How awesome! Even better than the first one (which I have definitely seen by the way, but it was a long time ago so don't ask me about it).

When it finally finished we all realized it was dark outside. "Shit!" said my friend. "That was a long film!" "Yeah," I said. Then I panicked because it seemed like I was criticizing it, so I added: "but the time just flew by, let's watch it again!" I looked over at Peter, and was pleased to see he was half-smiling. As soon as I could I bought the DVD and have watched it like 20 times since. 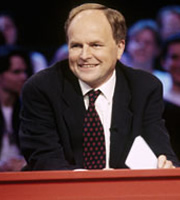 Robert Duvall, back when he hosted Whose Line is it Anyway?

Watch out, Robert!
Those things are deadly!

There's this really cool thing I noticed in this film: Whenever anyone eats an orange, they DIE! Well, except for that scene where Michael and what's-his-name talk about oranges, I don't think anyone dies there. Then again there are so many characters it's hard to keep track.

No one told me about this little flourish, I discovered it by myself. I now recommend you go and watch it again so you can enjoy the depth it adds to the film. Remember to keep your eyes peeled though, as this is really advanced stuff that your average Joe would probably miss. How I pity those people.

All the critics loved it, obviously, including that Rodney Ebert guy. He's the best critic ever so you can't disagree with him. He, like, invented film reviewing.

Also my tutor Peter has posters of it all over his office wall and he made us watch it in class so it must be good! (he knows a lot about film too, he even has a Jaws t-shirt. So cool!)

The only person who didn't like it was my sister Keira, but that's probably because she didn't understand it. I guess you have to be smart to watch a film like this. "We need to watch it again, you weren't paying attention," I said. She told me that she did understand, she just thought it was boring. "Boring!" I said to her. "It's on the AFI's top 10 films ever! It won like, 20 Oscars or something!" She said "I don't care if it was directed by Jesus himself, I don't like that kind of film". What an idiot. "By that kind of film do you mean good films?" I said, wittily, but she had already left the room.