Spilled ink is worth crying over. WARNING: Do not print this image unless you are Warren Buffett or are using the work printer.

For example, purchasing sufficient ink cartridges to print a collection of baby photos can bankrupt many families. Parents often have to resort to a second mortgage or consider selling one of their older (and therefore less endearing) children into slavery. Recent purchases of ink stocks by sub-prime home computer users has been widely blamed for the credit crunch and the ensuing global recession.

Pigments are the chemicals which give ink its characteristic color, or in the UK, colour. This distinction alone doubles the production costs of the raw materials to ensure that pigments are available to suit both sides of the Atlantic. This, combined with the need to provide exotic variants such as couleur, farbstoft and χρώμα, makes pigment manufacture a ludicrously expensive undertaking.

Black ink is the mostly widely used, and therefore most expensive, type of printer ink available. It is widely used to print text-based documents, but also proved essential for printing 2008 Democratic presidential campaign flyers. As black is a combination of all known colours, manufacturing the pigment requires a tiny sample of everything in the known universe to be mixed together in equal quantities, and requires teams of highly skilled blenders and samplers to ensure consistent quality. Any deviation from this recipe results in a sludgy brown pigment only suitable for painting British railway terminals.

When mixed, the pigment is so dark that not even light can escape from it, and large quantities are highly dangerous. It must be stored in a cryogenic vacuum, or "black hole", which must be guarded night and day to prevent possible misuse by terrorists, fanatic goths or Ninjas. One spoonful of pure black is sufficient to destroy a city, hence most black holes are kept in warehouses on the outskirts of Birmingham, where any damage wouldn't be noticed.

Recent attempts have been made to directly synthesise black pigment from naturally black materials such as carbon and Michael Jackson. Whilst the latter experiment successfully produced a cheaper alternative to traditional black, it resulted in the donor becoming as mad as a haddock; hence future experiments were abandoned, much to the chagrin of music lovers.

Yellow is almost invisible to the human eye, but yellow ink is essential for printing those photos of fields of sunflowers that ink-jet manufacturers insist on including as sample images. It is also useful for smileys, banananananas and submarines, hence its popularity with Internet-savvy underwater orangutans.[2]

In 1957, early versions of the pigment were found to be infected with the rabies virus, and had to be disposed of by owners. Today, "New Yellar" is a by-product of the production of saffron, a spice so precious that Buddhist monks spend their whole lives in poverty in order to dye their robes. Saffron is obtained from the minute pistils of the crocus, with the pigment itself coming from the microscopic ovaries of the pistil.

Produced in Tibet, each flower must be grown in its own jewel-encrusted golden pot for 16 years before its ovaries are ripe enough to be harvested. They require constant attention from skilled gardeners, feng shui experts and, strangely enough, close-harmony singers to ensure perfect growth. Each pistil yields just 3 micrograms of pigment, of which 2/3 must be sacrificed to the flower goddess to guarantee a successful crop next season. China then demands a 50 per cent share for Yellow Sea maintenance, before pure yellow is transported, by elephant, over the Himalayas for final processing. Convoys are often raided by bandits, who sell the pigment to India's notorious sweet shops for use in sherbet lemons.

The Red Arrows harvesting cyan. The white bits are later coloured in by the mentally ill as therapy.

Cyan is the colour of the sky on a clear, crisp November day two hours before sunset in London, England. The aforementioned location is one of the few locations from which it can be extracted.

The pigment is therefore incredibly rare, and during the few days that meteorological conditions permit cyan harvesting, fast formation jets are employed to make best use of the time available. Vast crowds gather to watch the spectacle and then to welcome pilots home with a "harvest festival". This traditional celebration is accompanied by fireworks, the burning of effigies and the drinking of "cyanide" (a blue liqueur with only slightly fewer unpleasant side-effects than Curaçao).

Cyan, once harvested, contains many impurities which cannot be chemically removed. Filtration and high-powered centrifuges can be employed to produce pure cyan, with the remaining impurities being bought by unscrupulous Chinese business persons who market and sell this inky abomination as the dreaded "Azure".

Since the dawn of the new millennium, Cyan has been stored underwater and guarded by the elite Aqua-Marines to protect it from raids by Vera Lynn and allied activist groups who regularly attempt to enliven the over-hyped white cliffs of Dover with bluebirds, jingoism and traditionally British misplaced optimism. Inspired by Boadicea and her Iceni tribesmen, who wore woad (and precious little else) into battle, a naked Aqua-Marine covers himself in cyan whilst on active duty. Whilst intimidating to potential raiders, it does make the awarding of medals a somewhat painful process. The resulting large proportion of sado-masochist in the ranks makes the Aqua-Marines a force to be reckoned with, and they frequently indulge in preemptive strikes on potential enemies just to maintain their testosterone levels.

If you see an 8, you are blessed with imagination. If you see two rabbits humping, you're just plain sick.

The price of magenta ink is largely driven by the fact that it is an imaginary colour, akin to imaginary numbers such as the square root of minus 1 or the value of Zimbabwe's economy. It was originally "imagined" by René Magritte, who famously declared "Ceci ne pas un couleur" shortly before adding "Mais je suis un pamplemousse"[3] and being confined to an institution for the criminally surreal on the outskirts of Brussels.

Designing something that does not exist requires great skill on the part of the manufacturers, who rely on individuals noted for their creativity and failure to live in the real world. Although the means by which magenta was first conceived of as a potential ink is a highly guarded secret, it is believed[4] that the blend relies upon the imagination of young girls still in their Princess Barbie phase, ancient hippies still coming down off their 1963 LSD trips and the creative team responsible for Barney the dinosaur. "Imagineers" are kept away from the real world as much as possible, and only allowed to view TV programmes such as Lost and Fox News to prevent contamination.

Production must be conducted in an atmosphere entirely devoid of realists, cynics or Richard Dawkins, as a single milligram of reason can destroy an entire crop. For this reason, most magenta factories are located in Kansas, well known for its tolerance of all colours of the rainbow.[5]

A molecule of DHMO. Its similarity to Mickey Mouse means that users have to pay royalties to Disney.

Once obtained, pigments must be combined with other ingredients to manage viscosity, permanence, adhesion, cohesion, traction and osmosity. Failure to include any of these commodities may render the ink radioactive or lethally toxic. Bad ink is often still sold in Black Markets and Wal Mart.

In order to enable ink to flow, pigments must be dissolved in a carrier or solvent known as dihydrogen monoxide (DHMO) that is phenomenally scarce in the natural world.[6] It can be obtained in indeterminate quantities from rivers, lakes, oceans, underwater aquifers, wells, springs or clouds, but the best DHMO is extracted from icebergs. First discovered in 1912 by Fredrick Fleet and Reginald Lee, so-called "hard" DHMO was ultimately responsible for their deaths and those of many other intrepid prospectors hoping to profit from the exploitation of the new wonder solvent. Despite the danger, ink manufacturers continue to mine DHMO from the polar regions, with an area the size of Wales being melted every week. Protests by environmental activists such as Greenpeace, Al Gore and penguins continue to hamper DHMO extraction, greatly increasing production costs.

Once extracted, the solvent must be melted subjected to complex chemical processing. It is then stored in closely controlled environmental conditions, as exposure to temperatures below 0°C or above 100°C will render it worthless, and it is prone to contamination by bacteria, algae, sharks, water-skiers and international shipping. 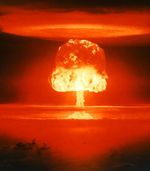 The result of using non-genuine ink. YOU HAVE BEEN WARNED.

Many unscrupulous and unsupervised manufacturers in far-eastern sweat shops manufacture fake printer ink in an attempt to dupe the general public. Genuine, caring ink jet manufacturers warn that using such ink will invalidate your warranty and may result in poor print quality, corrosion of the print-head, explosions, and mass extinctions, as occurred with the dinosaurs.

Fake magenta, for instance, is often produced by blending puppies in a wood chipper, whilst yellow consists of yak's urine mixed with equal quantities of nitroglycerine, asbestos and radioactive polonium, and fake cyan is in-fact likely the dreaded azure.

Users are strongly advised not to use this cheaper sub-standard and highly dangerous [7] alternative to the genuine article, and make strenuous efforts to prevent its use, including frequent redesign of ink cartridges, patented circuit technology and the kidnapping of fake ink manufacturers' children. In short, if you cannot afford the high-quality, reassuringly expensive inks manufactured by genuine, caring ink jet manufacturers, you should go back to producing documents using Biros or by daubing berry juices and your own excrement on cave walls.

A printer without ink.

Featured Article  (read another featured article)
Featured version: 20 February 2009
This article has been featured on the front page. — You can nominate your favourite articles at Uncyclopedia:VFH.