From Uncyclopedia, the content-free encyclopedia
(Redirected from Boar)
Jump to navigation Jump to search

A wild boar could be many things. Mostly it is just a hairy pig with tusks, but there is so much underlying that makes this magnificent creature so complex. Gather around, friends, and prepare for the epic journey.

Like most quadrupeds, boars typically have four legs, neatly accessorized with four proportionate feet. They tend to be larger and fatter than any species of pig known, with some boars weighing up to twenty two bajillion pounds. Boars also posses tusks with which they stab things. Boars also sport a spiral tail. The spiral tail of a live boar is often used to make mini tornadoes, while the tail of a dead boar is used as a corkscrews to open the highest end of fine wine and champagne. A boar's head has 1-3 eyes, one booger-oozing snout, one mouth with sharp tusks sticking out, and two ears (one for hearing and another for shooting earwax).

Boars also commit two deadly sins every day: gluttony and wrath. Therefore, all boars go to hell when they die.

Arabian boar: These boars survive in the war-torn deserts of Iraq and Iran. Due to this harshness, they have evolved thick fatty skin which can make incoming bullets bounce back at its attackers. Arabian boars also compete with camels for food (and eat camels every so often).

Skateboar: You usually see these boars riding skateboards through the streets running over squirrels. Their main habitat is skate parks, where they perform extreme stunts and eat people who die from skateboarding accidents. This is the reason why your parents tell you to wear a helmet, so the skateboars don't eat your brains.

Wilde boar: It looks just like you, Oscar! Only it's a pig.

Wario: Like all boars, Wario is a fat, hairy hog who eats everything in sight and gets mad very easily.

If you don't can it, Oscar, I will stop manually inserting your quotes!! Ahem...anyway. Boars have a weakness. They have to eat to live. Because of this, you commonly see boars searching for grub, such as grubs, to eat. Due to the stature of boars, and poor metabolism, all the food goes straight to their ass. Boars have to eat their weight, in berries alone, to survive an afternoon.

Boars live in grassy knolls. There is no other place they choose to dwell. That's all I have to say about that.

An angry boar that just woke up.

Boars often wake up in a pissy mood, partially because they hate their jobs and their spouse was caught cheating on them. After waking up, boars must begin their daily eating rituals. They may be interrupted by the presence of predators like giraffes, baby clowns, grues, feral cats and feral midgets.

Once the boar is done with the eating it is nearly bed time. They finish the night off by making sweet boar love to either a warm gym sock or a rotting carcass they couldn't finish eating.

Boars and pigs are both fat lazy creatures that wallow in their own filth with ZERO criticism. But there are differences between the two. The most obvious differences are that boars are bigger and fatter than pigs, have more hair, have tusks, and are very angry. Besides, boars eat pigs.

Unlike boars, pigs have all the charm, beauty, women, money, fame, and respect they can get, and they are protected from giraffes by 3-foot tall fences. The only downside to being a pig is the inevitable slaughter once they are fat enough to be eaten by humans or other carnivorous bipeds.

Boars, while ridiculous-looking freaks, are also dangerous and unpredictable. They will tend to attack anything that moves and/or pisses them off. If you run into a boar, you are most likely screwed. There are some ways you could stop a boar from killing you. I protect myself from boars by carrying boar bacon in my pocket. Why do I keep boar bacon in my pocket? Because boars eat pigs and pig bacon. Also because I get hungry sometimes.

Even if the boar doesn't kill you (which it likely will), you will still get horribly injured. Some guy who was attacked by a boar now craps from his mouth and vomits from his ass. But if you're lucky, the boar won't eat you (but usually it will).

You may also want to carry a weapon for extra measurement. Unfortunately, the only weapons that can kill a boar are machine guns, grenades, chainsaws, and Chuck Norris. Other than those, the only way a boar doesn't eat you will be if it dies of heart failure from its gluttony. 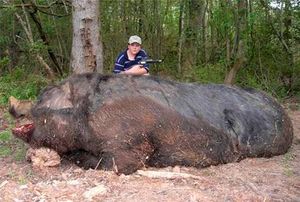 The biggest, fattest boar ever to be hunted. The guy pictured here actually lost his testicles in the great battle with this beast.

Boar hunting basically involves people hunting wild boars. Why? There are many reasons why people may hunt boars. Mostly it's because boars are in the Pig family, and therefore can be used as meat. In fact, due to their fat, boars produce the most delicious bacon known to man.

~ Elmer Fudd seconds before his painful encounter with a wild boar.

However, boar hunting is a risky activity because boars are dangerous animals. Over 100 people die in boar hunts every year, mostly it's because they're retarded and don't know the dangers of an adult boar (or what the crap a boar is). And also because they are unprepared and/or do not have what it takes to hunt a boar. You have to have the right materials for hunting a boar (see the above section). In fact, using a grenade is the easiest way to make boar bacon.

Other reasons for boar hunting may be to make yourself look like a man, because it's a great stress reliever, because boars make an excellent target practice for Fat Guy Stranglers, and because it's a combination of camping in the woods and committing suicide.

Porky Pig, formally known as Porkshire Boarson
“I remember ol' Winnifred like it was only yesturday. He was a swell young chap. Always brought me my slippers an' pipe. I would regret killing him, if he wasn't so tasty on my crumpets!”

Boars have really had no impact on history. The only boar who ever made it disguised himself as a pig. That was America's favorite animated livestock, Porky Pig. Porky hadn't always been so handsome and successful. Before he converted, Michael Jackson style, he was ridiculed as a boy. His parents enrolled him to pig school, knowing perfectly well he was a boar. He was teased for his absurd tusks, hairy body, and enormous cock (Pigs prefer tiny penises). Every year, Porky has his tusks sawed off and his body shaved. As far as the huge cock goes, let's just say his human girlfriend has no complaints, except for the complaint of being in jail for having sex with an animal. Other than that, no other boar has EVER done anything worth anyone's time. In retrospect, I am now upset for wasting my time talking about this worthless animal.

You can go away now, Oscar. I'm through with this sh*t!