From Uncyclopedia, the content-free encyclopedia
(Redirected from Carcass)
Jump to navigation Jump to search 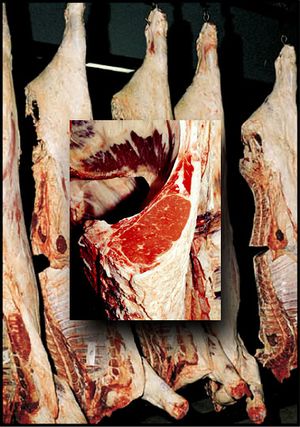 Bill "Man-I'm-So-Vegan" Steer teamed up with Jeff "dreads" Walker and Ken "greaser" Owens to form Carcass. They were pretty good except for the fact that they recorded from inside the hollowed-out chest cavity of a morbidly obese sumo wrestler, an idea which Napalm Death endorsed. Their first album, Reek of Putrification, was released. The album cover meant a lot to Bill "the-screamin'-vegan" Steer because it was one of the pages from his yearbook at the Zombie Institute of Liverpool. Shortly after, their second album, Symphonies of Sickness, was released featuring longer songs because one of the problems with the first album, Jeff Walker noticed, was that just when you were beginning to get comfy inside that bastard's ribcage, you all had to come out again.

the changes to the band[edit]

It started when Jeff Walker picked up a tibia and threw it at Bill, and bill threw a brain at Jeff. It was getting really bad, so Ken Owens hid behind a table and waited it out. Eventually Jeff won by throwing a spleen at Bill, who surrendered and gave Jeff power over the band. The first thing Jeff decided was to leave the pathology department and go to a real recording studio. The second was to add Mike Ammott into the band. Ken Owens took a photo of the leftovers of the fight and used it for the Symphonies of Sickness album artwork, and took some last pictures of the pathology department, along with some sound recordings, to use in the next album.

Carcass' third album, Necroticism-Descanting the Insalubrious was released, and it was quite a success. Since they had a real studio to work with, people could actually hear the music. Mike Ammott turned out to be beastly at leads, and since Bill Steer's Blues infection was getting more and more apparent, Bill began to learn from Ammott. Their lyrics began to switch from "bad day at the pathologists'" to "Damnit, we shoulda done that when we had the chance".

The next album, Heartwork, was a time of musical awkwardness for the band as they transitioned from the grindcore sound to melodic death metal. Jeff Walker provided the intensity, Bill Steer kept trying to write blues licks, Mike Ammott brought the melodic quality of the music to new levels, and Ken Owens went cruisin' down the road in his vintage convertible with the rest of his Liverpool gang of greasers. The album cover is Bill's idea, designed to counteract the bad vibe they had with all that dead-people stuff, man. It was bringin' him down, givin' him the Blueeees. I mean, look at it. It looks like a peace sigh with some happy metallic arms that look like they need a hug. Okay, the background might look like a blurry close-up of some nefarious organ, but in realist it was a Photoshopped toasted English muffin. It's rumored that the exact muffin used in the creation of the album's cover was sealed and sent to the members of Darkthrone so that Fenriz could put it in his collection of metal paraphernalia.

Swansong and the band's breakup[edit]

Unfortunately, Bill's Blues infection was rapidly intensifying and the other members had to restrain him from tuning up, turning down, and wailin' about all his troubles. Jeff Walker started to notice the early symptoms of the Blues, and for some reason was deluded into thinking he was African-American.. er.. African-British, however you say it. The album had some good songs but the rest were sleepy and sounded like Bill had discovered a twelve-acre field of weed in his backyard. the album was, on the whole, a fail and it was no doubt the band broke up.

Bill, free of his bandmates' complaints that he remain a death metal guitarist, formed a blues group called Firebird. They're actually pretty good. Later on, he'd go to Blues Rehab and learn how to be metal again so he could tour with Carcass without feeling an urge to say things like "oh baby, baby baby"

Jeff, still confused about his skin color, kept up the metal tradition with his band Blackstar Rising, a reference to himself. Ken Owens followed him because metal is where the greaser ladies are.

Before their deaths, Bill and Jeff were cryogenically frozen, and when they were unfrozen they realised that they were absolutely broke. So, they lied about their pasts and played on the streets for money until they met Smeg, age 17. They utterly despised Sham-Glam and felt a burning rage inside when Smeg made them put on ridiculous outfits, but it was a living. in secret they reminisced about their time in Carcass and released some demos entitled "Help I'm Trapped in the Bloody Future". If you search hard enough maybe you can buy them

Some bitch on TV who doesn't know how to spell made a joke about how Carcass was going to play at their wedding. Damn lucky whore. I wish they'd played at MY wedding. Maybe I'll get a divorce and remarry just so they can play.