Sometimes, some crimes go slipping through the cracks. But these fellows didn't slack off. There was no case too big, or no case too small, and when you needed help, all you had to do was to call for the Chippendale Rescue Rangers. When there's danger they never fail, and when they're involved, they didn't stop until the case, whatever it is that may be wrong, is solved. They took the clues, and then found the wheres, whys, and whos. The Chippendale Rescue Rangers!

The Chippendale Rescue Rangers was formed in the late Winter season of 1982 by chippendale founders Somen "Steve" Banerjee and Paul Snider when they had the idea of expanding their market of male dancers. They had come up with a few ideas, such as cereal and "Chippendaleland", but those didn't work out too well, the latter especially because they couldn't bribe the amusement park businessmen with the right amount of money.

After watching crime dramas one day on a rainy afternoon, Snider suddenly got the idea to make a department of detectives out of some of the Chippendales, and he approached Banerjee with the idea, who liked it so much that he did an irish jig out of complete happiness (and also because he was a bit high at the time).

Thus, using some fancy resources and investments in crime training, they gathered their most promising members and trained them in the art of crime-solving. Within months, the Chippendale Rescue Rangers had been born from the time spent on refining their skills, and, of course, it proved quite effective and beneficial not only to the creators, but to the dancers themselves.

Clad in spandex pants, cuffs, and bow ties, Chippendale Rescue Rangers were always ready to defeat the bad guys and solve cases with their muscles and dances. The most infamous members were: 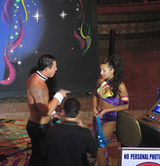 A Chippendale Rescue Ranger solving the case of the murdered magician.

The most prominent of the Chippendale Rescue Rangers' enemies, other than random villains and nogoodniks now and then, were a very fat cat, a mad scientist, a thespian and a mob boss. Every week, they would regularly commit crimes, leading to people and the police to call upon the help of the Rescue Rangers whenever the case was too much for them to handle. Their most challenging foes were their rivals in crime-solving, the Playboy Bunnies.

The Chippendale Rescue Rangers soon became quite popular, especially with the ladies. Aside from getting special thanks from the mayor and people from the city for their effortless efforts, they got to woo the girls, who practically threw money at their feet when aroused by their dances. Best of all, they got to keep whatever was thrown at their feet, so it was much more rewarding money-wise.

However, as time passed on and crime was being fought and solved, finding nogoodniks committing evil was gradually becoming harder and harder due to a great crime shortage in the mid-1980s. One day on September 17th in the year of 1986, their boss, Somen "Steve" Banerjee, committed arson by burning down the Playboy Bunnies' base of operations while Paul Snider killed one of the members. They would have gotten away with it if the Chippendale Rescue Rangers hadn't gotten involved in the case, and to everyone's shock and awe, found out it was their two bosses. This, of course, caused the Rescue Ranger's own destruction in operations and in popularity.

With the case wrapped up, Banerjee was sentenced to 1 billion years in prison and Snider was given the option to be sentenced to a firing squad or suicide by watching non-stop reruns of My Little Pony. He opted the firing squad, who terminated his employment and repo'd all of his possessions, leaving him to become a pennyless and homeless boozed-up drifter. He later died in an alley from stab wounds inflicted from, ironically enough, a Playboy Bunny who he had mistaken as a simple whore, who was also actually, even more ironically enough, a chippendale in disguise.

The Chippendale Rescue Rangers themselves disbanded shortly thereafter, ending their crime-solving and returning to a life of strip-clubs and lap dances. "Monterey" Jack later left his career as a chippendale and became the owner of a pizzeria, known as "Kangaroo Pizza". Zipper continued on his job, however, and Dale married Gadget. Banerjee later committed suicide in his cell by slipping on a bar of prison soap while in the shower while holding a hair dryer.

Note the obvious lack of the chippendales.

In the late 1980s, Disney read about the history of the Chippendale Rescue Rangers and, in a fit of inspiration, decided to make a cartoon series that would chronicle the adventures of the noble male strippers in their fight against crime. It was to be one of their first animated biographies made into a serialized TV show, a unique idea at the time.

However, as the show was halfway through development, the staff soon realized that they were making a cartoon about male strippers. This of course, caused the entire team to go up in an uproar, worried that producing this show may cause parents to sue Disney for every penny they've got for infringing upon the minds of the young. After a lengthy discussion (which ran a lot longer than it was supposed to), it was decided that, to avoid lawsuits and creating "bad role models" for the children which could turn them into strippers at a young age, they changed the entire cartoon up and down for their own personal safety.

Rather than the chippendales, the show was focused on two cute chipmunks who become involved in crime-fighting. Monterey Jack was remade into a fat mouse, Gadget was redone as the sex-appeal of the show (which was also a mouse), and Zipper was redrawn as a mutant housefly/dog hybrid with an olive for a nose. The title, therefore, was changed to Chip n' Dale Rescue Rangers, although the names of the original members were kept in relation to the replacements made for the show. Banjeree and Snider were, at first, going to be kept in, serving the role as the Rescue Ranger's intel, but were soon scrapped as well, as Disney feared that they too might inspire the kids to put on spandex pants and walk around shirtless, due to paranoia. Another factor was that the pair were still as infamous as the rest of the chippendales even after their deaths at the time, and didn't want their history and presence screwing up the ratings.

Interestingly, the show does, in fact, still tell the tale of many of the real-life adventures of the chippendales, but only without the stripping and adult themes, and tailored to a more cartoony theme where the Rescue Rangers all live and operate in a tree trunk and was seen from their tiny perspective. They even kept the theme song that was loosely associated with the original Chippendale Rescue Rangers, which they often played on the radio and Disney stole and modified for their own usage. This show touched the hearts of millions of kids and adults everywhere, as well as mice and parrots.

Zipper and Dale, of course, seeing this, tried to sue Disney for defamation of their former lives and theft of their theme song. They took the case to court, but unfortunately, because by this time the Chippendale Rescue Rangers were all but forgotten, they were ruled out as liars and Disney won the case in their favor, which got Zipper put in the mental institute. Disney, however, knows that Dale knows the truth, and to this day he and the real-life Gadget have been on the run from their assassins. 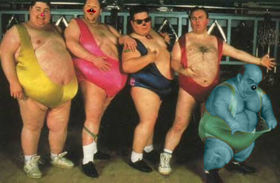 The reunited Rescue Rangers in 2025, posing as they mock the Disney cartoon.

During the year of 2025, the Chippendale Rescue Rangers experienced a temporary comeback into the detective fray well after the run of the TV series, which means they could assume their rightful roles once more without the worry of being sued for it... or at least, hopefully not. Gadget could not make the party, and Chip became old and rotted and was later eaten by termites, but Dale's friend back from the ol' strippin' and crime-fightin' days participated with them (who was reportedly a Welshman named "Yorkie"). Despite having aged, the team were as nimble and intelligent as before, thwarting bad guys for a good while until it came to be realized that they weren't as popular with the ladies before... and they weren't quite sure on why. Children were also somehow disgusted by them and a few of them even cried and ran away, which further left them wondering just what happened to their former glory and popularity.

Dale reportedly said that it felt good to be back in action again until he broke his hip and fell down the stairs. He also revealed that he might be having an affair with his wife, as he had been in love with a batgirl, who he met one day while walking around a spooky castle and had been seeing since.

Eventually, they broke up once again after two months because the action was wearing them down. Also because, appearantly, parents were filing lawsuits against the Rescue Rangers for scaring their children and trying to imitate a popular cast from the TV show that was originally meant to be based on them, and not wanting to get Disney's attention and send assassins after all of them, Zipper suggested that it's best to put the Rescue Rangers to rest. Jack was disappointed, Dale was dissatisfied, and Yorkie was to busy being Welsh to notice. They grudgingly agreed to disband, and did so after a tearful goodbye, once again fading into obscurity.

Not that anyone really cared about the efforts they were making to stop crime, anyways...