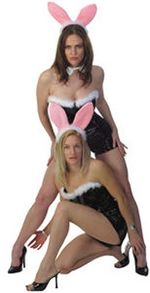 Bunnyland is guarded by a security force of highly specialized, and dangerous Bunnies that you simply do not want to fuck with...seriously...

Bunnyland is a name used by two distinct places, neither of which has much to do with the other. Bunnyland may refer to the to west wing of the Playboy Mansion in Los Angeles California, or it may refer to a small whimsically shaped island off the southern coast of Easter Island that is populated with chocolate rabbits.

Both places represent the dreams of young boys and girls and the dreams of octogenarians and scantily clad nymphomaniacs who live out a swinging fantasy of an Engelbert Humperdinck groovy kinda lifestyle long-gone in this age of safe sex.

Discovered by noted explorer and confectionist Sir Brach Hershey, Bunnyland (the Island) was revealed to the world in 1869 during one of Hershey’s around the world cruises. He had already attempted to claim Patagonia for American candy and challenged the British 'sweeties' off the stormy coast of New Zealand but with no success. Then out of the fog banks of the Pacific, a new island came into view.

Normally western explorers were drawn to the stone giants of nearby Easter Island, but, Hershey noted in his diary on April 4, 1869 that his ship, drifting about in the waters to the southern coast of Easter Island when it was approached by at least “One-hundred dug-outs, each holding what appeared to be milk chocolate rabbits with piercing yellow and blue eyes,” which “beckoned the crew and I to follow them back to their homeland.”

Having run out of fresh water some two weeks before, and tired of consuming their own urine, Hershey and the crew were only too happy to jump into the ocean and dog paddle the quarter mile or so to what was later to become christened as Bunnyland. 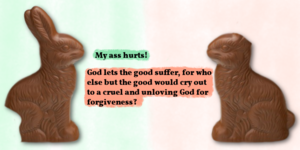 What passes for humor in Bunnyland

Once the crew had rested up on the beach, and after reviving Hershey (who had been dreaming of Nubian women lavishing him with kisses), the party set out to find the brown bunnies that had beckoned to them with promises of fresh water. Instead, the party stated that they stumbled upon a magical world of brightly flashing colors and molded chocolaty bunnies going about their business without a care in the world.

Hershey related upon his rescue from a log adrift in the Pacific by Portuguese squiders that the Bunnies maintained a hierarchical republic with a constitutional monarchy. That Bunnyland’s main source of income was derived from the sale of postage stamps. That the bunnies had no opposable thumbs made correspondence with the outside world impossible, and thus the sale of stamps profitable.

After spending what seemed to be a very long time on Bunnyland, Hershey was called upon the Good King Rarebit, to sample some of the island’s many delights. But what Hershey and the crew really wanted was some fresh water. Unable to communicate with the stoic hares, one of the crew members with Hershey’s party grabbed a bunny in waiting to Queen O’Hara and bit off the poor blokes head only to discover that the Godless creatures were hollow and had no souls!

Well, that really put a damper on this things as Hershey stated when he was being checked into Slocum’s Conveleriaum in Bristol. It was then that the crew they had a problem – millions of small chocolate bunnies turned on the party and drove them into the briny sea water where the survivors swam as if their lives depended on it.

When he was fully recovered, Brach Hershey took his real life experiences in Bunnyland and wrote Gertrude’s Adventures in Bunnyland, which quickly knocked Slovenly Peter out of the number one best selling children’s book in Great Britain and the United States.

Hershey followed the release of fortieth edition of the book and began marketing hollow milk chocolate Bunnies for sale to children during Easter, advising the kiddies to “eat the head first, or at a very least gnaw the eyes off so they can’t follow you about and kill you in your sleep."

And thus, a happy tradition was born. Except in Bunnyland. Alas, the native population of chocolate bunnies and hares were devoured by ravenous school parties from New York, leaving discarded rappers and greeting cards, devoid of meaning or anything to nibble on. Only a few hardy chocolate rabbits survived, these were brought back to America for food museums and candy emporiums. Slowly chocolate bunny numbers rose again and were being bred for instant gratification or 'tummy comforters'. Hershey said these knew mass produced bunnies were superior to the ones he had discovered earlier and could breed in vast numbers every Easter. 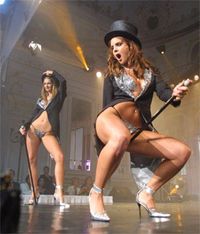 Hugh Hefner’s bunnies are as pretty to look at as they are yummy, er, eh, to play with. Each cornfed young woman, fresh from America’s wholesome farmland is jam packed with vitamins, mineral and silicone, just what America’s eternal numeral Uno Bachelor needs in his diet to function as the Don of Dirty Pictures.

At that precise moment, the Bunny is scooped out of the water and delivered to “Hef” who is quickly removed from the ventilator and injected with enough Viagra to raise a bull elephant's interest to a steady, vertical position. The mating takes approximately 30 seconds, and when he’s through, the Bunny is clothed, given $500 in travelers cheques and told to write when she finds work before being ejected from Bunnyland.

If this happens at Easter, she is give a copy of Hershey’s work, a hollow chocolate bunny and instructions to eat the eyes off first – that way when she is in a crack induced coma the bunnies won’t know where she is to attack her.