From Uncyclopedia, the content-free encyclopedia
(Redirected from Asian chicks)
Jump to navigation Jump to search 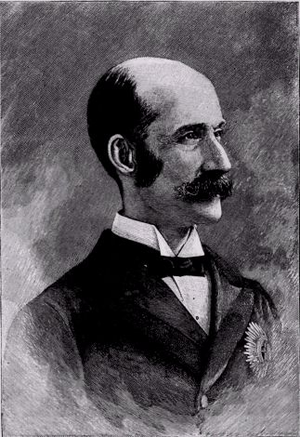 A picture of the author, Henry Petty-Fitzmaurice, no doubt drawn in mid-'hot Japanese girls' fantasising.

Hot Japanese Girls - Colourblind or Unable to Speak English? is a book written by Henry Charles Keith Petty-Fitzmaurice, 5th Marquess of Lansdowne, KG, GCSI, GCMG, GCIE, PC, upon his return from the land of the 'Rising Sun' in the summer of 1906, where he had represented Great Britain at the signing of the Anglo-Japanese Alliance Treaty, despite having no knowledge of the Japanese culture whatsoever. The book brought controversy to both home and abroad (Japan anyway), as it lead to the abrupt end of the treaty, and worse, Petty-Fitzmaurice's promising career in writing, not to mention his marriage.

The book discusses, as the title suggests, whether attractive Japanese women are colourblind or just can't speak English at all - a question wholesomely inspired by a meeting with a Japanese female with a particularly confusing item of clothing: a powder blue top with the words "I ♥ Pink" on the front. The chapters contain a full Japanese experience through the eyes of Petty-Fitzmaurice, during the aforementioned stay in Tokyo in 1906, including saucier Japanese extra-marital affairs featured in Lost in Translation.

Chapter One - An Introduction

Of the little knowledge and understanding I hold of the Japanese nation, a vast majority of ravishing Japanese girls are actually fictional, as with most females on the planet. Anyone familiar with the common flavours of the delightful Japanese culture (sushi, seppuku, sex in kimonos) would instantly recognise the newfangled drawing style called "manga". It is from within this popular Japanese art that a high number of all lonely men in Japan find the girls they want to elope, be they underaged school girls or a tragic victim to the ribald misdemeanours of tentacle rape or suchlike. The rest of the men, or the minority of Japanese men, the suitors and samurais (or so I am reliably informed by a native) fight hard for the attractive Japanese girls who are, in fact, most certainly in existence. They must struggle to even get their attention, as the womenfolk are adamant in their objective to catch a nice husband from the west instead of one of their own - which is why arranged marriages in Japan is so commonplace.

To even succeed in such a venture, these girls must learn to speak English. However, some girls may choose to learn whatever English words they see in the Akiba district of Tokyo, or to be even more extreme, simply purchase cute clothing with 'cool' English words on the front. This left me quizzical and left me pondering, whether this meant they were colourblind or couldn't speak the Queen's English at all. In this book, that I penned myself between trips aboard the Orient Express, I shall enlighten my fellow gents with the answer to this most stifling question. 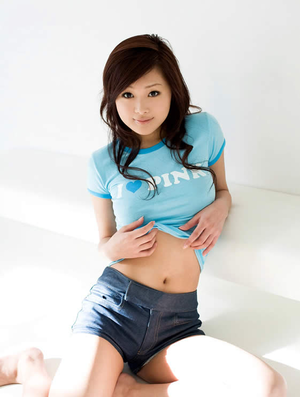 Hinano herself. I persuaded her to get out of the hotel bed and wear the shirt she wore when we met. You can see the emblazoned line, "I ♥ Pink", despite the blueness of the shirt. (Picture courtesy of my wallet)

It was, in fact, in Akiba that I met my Hinano. She was indeed... 'hot', to use a word my editor forced on me.

Hinano was a magnificent girl. I loved her every curve and expression, from her shapely legs to her glistening smile. Her laugh, her white teeth, her eyes, she was so just, and beautiful, so splendid and pe- I'm sorry. I met Hinano two days into my stay in Tokyo, in a curious newsagents called a 'hentai shop'. I was flipping through the pages and reading about a splendid Japanese High School of what I presumed was The Guardian. My engrossing read was disturbed, but without dismay by the inherent sound of a light titter from behind me. I curtailed my page-turning duties, and turned my head to the direction of the churlish giggle. My eyes widened at the sight I beheld. The most ravishing girl I had ever set my gaze upon. Rather comely, in fact. She had brown, flowing hair, roasting lips and such a wee delicate nose. However, at the very same time, I was subsequently betwixt by the choice of her clothing, in spite of her obvious beauty. She wore a blue top, with the words "I ♥ Pink". A most confusing clash of colour and text. Was the hot Japanese girl colourblind or unable to speak English?

I stared at her and she returned my gaze, smiling, before turning away and blushing. Her cheeks reddened deeply under my heavy, fixated stare, so she ran off, out into the busy streets. I shook my head quickly and broke free of my lustful bewilderment and paused. But on a brief, sharp, second thought, I dropped my newspaper (it didn't feel like one anyway) and hurried outside to pursue her.

As I stepped outside, I looked about the street, bustling with the kind most entranced by the newfangled invention of 'electricity'. However, it was not hard to spot the girl against the crowds of sweaty 'otaku'. She was so good looking, I almost didn't want to run so I could just admire her from where I stood outside the newsagents. Nonetheless, I engaged pursuit. She ran from street to street in the Akiba district, but she couldn't shake off my steady pursuit, gleaned from many a fox hunt reminiscent of my days of the Hampshire countryside. I was using every fibre of my body to keep up, my motivation being herself and my sore determination to ask her the burning question: "Are you colourblind or unable to speak English?". We passed the last of the electronic shops in Akiba until the blurry architecture transformed from a neon glow to the grunge grey of apartments. Soon, she slowed, but turned immediately into an alleyway.

I went around the corner to access the alleyway forthwith, and half-cheered when I saw that the opposite end the alley was closed off by a dead-end, and her speedy tracks halted. Although I was slightly worried that she might think that I would be a ravager of sex seeking her ravishing body. However, my worries were short handed, when she turned from the dead-end to face me. As I panted to catch my breath, I then panted in desperation for a tissue when I beheld her beauty once again. This time, she wasn't blushing. She looked almost angry, yet content, and her eyes had the look of all the lust in the world. I almost squealed at the sudden transformation from an innocent high school girl to a 'gundam mecha' of a Scotch dominatrix. It was with such appeal that a voice in my head cried "Change! Combine!".

She approached me and before I could ask her my pressing question, she put a delicate finger to my mouth, and pressed her other hand onto my groin. My eyes could not believe what was happening, as she then brushed her lips against mine and kissed me slowly. She wrapped her legs around my kneecaps and snogged at my neck passionately. From this perspective I was able to catch a glimpse of a clothes tag on the inside of her shirt, someone (presumably she) had wrote "HINANO" on the tag. As she consticted her body around mine, I wondered for a few minutes if Hinano was her name. Then I joined in with the lovemaking, mad as a hatter, starting with the you-know-what. When she eventually held back with her arms around me, I finally asked her the question, which definitely was not "do you want to come back to my place?".

Chapter Three - An Interview With Hinano

The following morning, I emerged from the hotel room's shower-room in my jammies to observe the messy bed like a clumsy, but chuffed carpenter would survey his work of art, a badly built fireplace. Although, like the fireplace, it still had a healthy flame asleep in the embers. In this case, Hinano slept like a log, if you pardon the pun, on the bed. No doubt dreaming a dream of me and herself, deeply enveloped in the musky duvet of the bedroo-

Once again, I apologise. The next day, I pondered my previous question: Is Hinano, my Japanese girl, colourblind or unable to speak English? When she woke up, I finally settled down Hinano (who jumped up and down on my bed upon waking) and gestured her for a conversation. With a notepad and pen in my hands, I stared her right in the eyes, eliminating all the images in my head of the numerous positions she presented me with the previous night and tried to focus with a straight, unemotional face. She responded to my dull look with a unceasing bout of giggling and blushing. At some point in the next half hour, she finally cracked and stared back at me with a slight smile, as if with the understanding that I was playing a sort of game, or blinking contest. I asked her the question:

Me: "Hinano, I have a question I would like to ask you"

She broke out giggling again, but then continued looking at me with trepidation. I restarted my questioning:

Me: "Hinano. Are you colourblind or unable to speak English?"

A brief moment's turning to the notepad to scribble down some notes on her reaction resulted in a fantastic doodle of myself as a cowboy. I continued the interrogation. 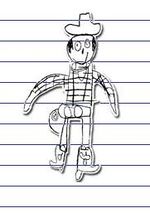 Which was crap, by the way

Me: "I am Henry from England. Do you speak English?"

With my curiosity satisfied, it was obvious that the odds were evening up for colourblindness. I decided to hold up several pieces of card, each with different colours.

The first colour, to relate with the shirt, was unmistakably blue.

Me: "Hinano, what colour is this?"

She looked at it for a long time, although the facial expression definitely exuded focus. After a while, I decided to prod her.

Me: "What colour is the card?"

I had no means of speaking Japanese, so I dumped the blue card and pulled out a stinger; a green card. I queried for the correct colour of the card once again. She stared long and hard at this one.

She giggled without end. I decided to call it a day, as I had to return to England. The next question was whether or not to anger my wife by taking Hinano (who proved hard to detach from my presence) back with me to Hampton Court. 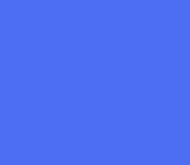 If you really think this pink card is actually blue, I would diagnose you as a hot Japanese girl.

After further study of the instigating article of clothing and a review of notes from the interview I considered the verdict of the assessment obvious: Hot Japanese girls are clearly colourblind. We may have had a few problems communicating, but she definitely could not identify various colours. As far as I am aware (ie. as far as my vast experience with overseas flings goes), of all girls that don't belong to the British Empire, Japanese females are the ones that have to be colourblind in order to be considered attractive. My results will prove important for the future of British health care, as it will aid the research into the fascinating medical condition that is colourblindness. Maybe being colourblind reclassifies you as a hot Japanese girl? If so, this would be the worst case of racial invasion since the majority of the England population were turned into Scotsmen.

Featured UnBook
Featured version: November 2008
This UnBook has been featured on the UnBooks front page.You can vote for or nominate your favourite UnBooks at UnBooks:VFH.

Featured Article  (read another featured article)
Featured version: 2 March 2009
This article has been featured on the front page. — You can nominate your favourite articles at Uncyclopedia:VFH.