This article is part of UnNews, your source for up-to-the-microsecond misinformation.
“Losing!” 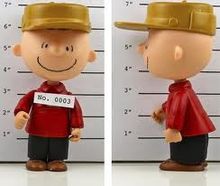 He's smiling because he has long lost the sensation of emotional pain.

AUGGH! -- A good man? Not quite. Everybody's favorite lovable loser Charlie Brown was arrested on Sunday for stalking and giving death threats to his long time love, the little red-haired girl.

On Sunday afternoon, Charlie Brown was coming home from a failed game of baseball, when he saw the little red-haired girl walking down the street. Filled with overwhelming feelings of infatuation, Charlie decided to follow her home. Suspicious that someone was following her, she eventually caught on to his creeping when she saw him attempting to hide behind a stop sign and rushed home. It was at this point Charlie began chasing her, shouting "Stop! I love you! I LOVE YOU!!"

The little red-haired girl made it to her house, locked the door and dialed the police. Breaking away from his well-known shyness, Charlie began pounding her door, screaming and threatening to break it down. When the police arrived, he was shouting at her window, "You ginger fucking bitch! How dare you ignore me?! Do you realize who I am?! I'll kill you! I will fucking KILL you!!"

This wasn't the first time Charlie Brown harassed the little red-haired girl. Just last week he was choking his dog Snoopy with Linus' security blanket, threatening to suffocate him if she didn't go to the Valentine's Day dance with him. The reason for Charlie's out-of character behavior is believed to be due to undergoing treatment for terminal pancreatic cancer, with has affected his brain, as well as robbed him of what little hair he once had. "I have nothing to lose," said Charlie Brown while being handcuffed. "I only wished we could've been together. At least for a moment before I'm gone. Forever."

Despite severe illness being a probable cause, the judge ruled against him on Wednesday, proclaiming, "Wah wah wah wah ass wah wah," which roughly translated is:

Meanwhile, all hopes of a unconditionally loyal Snoopy busting him out were smashed when the slightly anthropomorphic beagle was taken into custody by the local pound and put to sleep on Tuesday. Gosh darn it, nothing ever seems to go right for poor ol' Chuck.

Good grief! No valentines for me