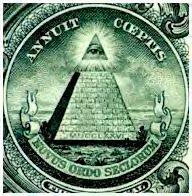 The IR$ is watching you! 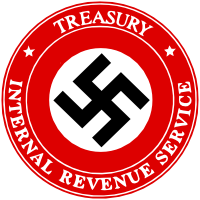 The offical seal for the IR$... Fitting, isn't it!!!
Whoops! Maybe you were looking for Robbery?

The Internal Revenue $ervice (IRS), also known as the Infernal Revenue $ervice, the Internal Rectal Service and the Eternal Revenue $ervice as it is better known to taxpayers, isn't a service at all, as taxpayers have known all along. Actually, it's a bureau of the U. S. Department of the Treasury. An evil organization, its purpose, according to the law that created and supposedly governs it, is to "harass, bully, intimidate, threaten, fine, imprison, and dismember American citizens into forking over up to 50 percent of every paycheck they ever earn for no other reason that that the IRS says that they 'owe' it to the government." The only real difference between the Mafia and the IRS is that the former organization is honest about extorting and stealing money from its victims, whereas the IRS claims that it is allowed to break the law.

Although Republicans complain about the IR$ all the time and claim that they want to cut taxes or even do away with government-sanctioned thieves altogether, it was one of their own, President Abraham Lincoln, or "Honest Ape," as he called himself, who created the bureau, way back in the 1860's, when he was fighting the Civil War because he wanted to retain the right to wear a top hat and a full beard, even in public. The Bureau of Internal Revenue, as it was originally known, was called this to distinguish it from the government's other organizations dedicated to stealing the hard-earned money of foreigners, through the imposition—and it was a huge one—of tariffs and duties on imports.

-give us all you got-

-we've got what it takes to take what you've got-

-there's only one named bill, and that's the bill to pay-

-we aren't no never not corrupted-

In 1864, the U. S. Congress repealed the cowardly act by which they'd spawned this monstrous, evil entity.

However, the senators and congressmen congresspersons were just joking, and they soon revived the income "tax." Since that dark, dismal day, the income tax has increased by leaps and bound and other clichés, with the courts siding with the IRS in allowing the evil organization to tax capital gains, dividends, interest, rents, and a wide assortment of other financial transactions and so-called earnings. To make everything look legal and above board, the president selects the IRS commissioner and its chief counsel and the Congress confirms these appointments. That way, political scientists contend, taxpayers are granted the illusion that their taxation is not without representation. It was at this time that the name of the organization was changed from the Bureau of Internal Revenue (known among moonshiners as "revenuers") to the Internal Revenue Service in order to protect the guilty "representatives" who had revised it. 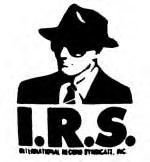 Ironically, the IRS' headquarters building, which is cut from marble to make it resemble legitimate federal government buildings, is located at 1111 Constitution Avenue. The intent of the address, critics suggest, is to associate the IRS with the Constitution, implying that the organization is legal, or constitutional, when, in fact, they claim, it is neither. To show his displeasure with the thieves who own and operate the IRS, God sent a flood in June 2006 that filled the building's sub-basement with water to a depth of 20 feet, causing electrical equipment failure and damaging 95 percent of the building's interior. As a result, the building was closed for the rest of the year. Three thousand government workers (IRS agents and other bureaucrats) drowned, but the government replaced them with homeless people who had had the misfortune to be seen displaying signs that read "Will Work For Food." The Government Accounting Service (which, allegedly, is not affiliated with the IRS) estimated that the cost of repairs could be as high as $25,000,000. "That's no problem," IRS Commissioner Mark W, Everson said. "We'll just increase everyone's taxes to recoup the expenditures." 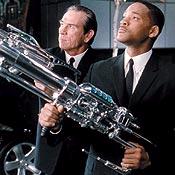 Every year, the IRS publishes a 100,000-page manual called The Friendly Guide to Paying Your Taxes, which critics describe as The Satanic Bible. Full of ambiguous phrases, mind-boggling jargon, examples and counterexamples galore, and lengthy forms full of tiny blocks and blanks, the manual is designed to confuse, frustrate, and incriminate its users. According to Everson, “We want the taxpayer to screw up so we can seize their home or levy a bank account.” The manual's latest ploy is to include maps of various cities that have nothing to do with taxes and direct the manual's users to indicate which streets they live on, doubling their tax by the number of letters in the street name that each taxpayer selects. "This is especially lucrative if someone lives on a street like Constitution Avenue or Sunset Boulevard," Everson declared. In the rare instance that a court overrules an IRS determination that a taxpayer has not been sufficiently fleeced, the agency files a Notice of Proposed Rulemaking, which entitles it to change whatever law or regulation the court has upheld against the agency. "That way, we don’t have to waste a lot of time and taxpayers' money responding to some idiotic judge's belief in the Constitution," Everson said. "We do this on behalf of our clients, the American wage slaves."

In September 2006, the IRS started outsourcing taxpayers debt collections to private debt collection agencies. Critics charge that this is an illegal and immoral invasion of their privacy and can result in collection agencies’ attempts to collect the full amount of taxes that the IRS alleges are due rather than dicker with the taxpayer, as has sometimes been the practice in the past. In addition, these critics contend, it will be almost impossible for debtors to pay off their debts when, in addition to the amount that the IRS claims someone “owes,“ they must pay an additional 200 percent per dollar collected. Everson’s response: “The new system is fair and balanced, and if anyone has a problem with it, let me know; I’ll see to it personally that the complainant’s taxes are audited every year for the rest of their life.”

The IRS repealed the appeals process in September, 2006, when it initiated the new collections process. "We determined, in one of our rulemaking sessions that people no longer need to be represented to be taxed."

For those without comedic tastes, the so-called experts at Wikipedia have an article about Internal Revenue Service.

Tax protesters claim that because the IRS is not a legal organization, because it is not the result of any statute, that it lacks the legal authority to litigate or to be litigated against, and that it is not an official government agency. Instead, it is the American branch of a Puerto Rican trust fund, they say. The courts agree in most cases, but judges are too afraid of the IRS to rule against the evil organization. Some say that the IRS Torture Chambers, located in the headquarters building's newly renovated sub-basement, goes too far as a collection instrument, and conspiracy theorists suggest that the flood was not heaven sent, as many people, especially taxpayers, believe but was, instead, intentionally created by cloud-seeding techniques as an excuse for the "repairs” to the basement which were really an excuse for the installation of the subterranean torture chambers. Everson scoffed at these allegations, declaring "The courts have ruled that sodomy, in the interests of tax collection, is not torture."