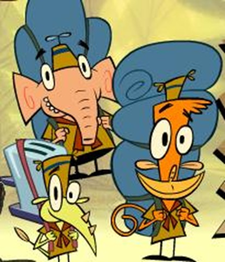 Camp Lazlo is a mediocre children's show on Cartoon Network. It is, ironically, not a camp.

Camp Kidney is the name of the camp that Lazlo attends. The camp is also ridiculously named, seeing as there isn't one kidney there, except the animated (but unseen) organs of cartoon animals camped there. Hey, I didn't name the damn show! (Poor Man's SpongeBob?)

In 1972 a young Joe Murray was sent to the "wackiest" camp he'd ever seen. This camp was, apparently, run and attended by cute little forest animals, because when he created a TV show about it 35 years later. The name of the show is actually a clever acronym devised by the writers. L.A.Z.L.O. actually stands for Love And ... well, nothing starts with Z, but what the acronym is isn't really important. What's important is that there is, in fact, an acronym.

The show airs on Cartoon Network, because they'd gone way downhill and were hoping that maybe, if they accepted enough shows, they'd get lucky and one or two might be good. Unfortunately this was not the case, and the network's "target demographic" has since dropped to include six- to eight-year-olds.

Spoiler warning: Lazlo dies in the final episode when he visits a favela (PT) in São Paulo, Brazil, his city of birth, thinking that it would be filled with cute forest animals, and therefore as cozy and joyful as a camp he had once attended. Armed teenagers quickly put an end to this.

For those without comedic tastes, the so-called experts at Wikipedia have an article about Camp Lazlo.