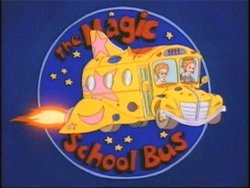 The Magic School Bus, right before heading off on another trippy adventure.

The Magic School Bus was a Canadian–American government-mandated program, introduced through a 1980s Scholastic book series and a 1990s PBS television series to teach uneducated children science. The franchise centered on an anthropomorphic vehicle with mystical powers, driven by eccentric teacher Ms. Frizzle and her class of multicultural students. She would take her class on weird field trips to impossible locations, including the solar system, clouds, the past, and the human body, where the students had close brushes with death many times, but always made it out in one piece except for when Arnold killed himself, in which case he very much died.

This attempt to make children learn was highly successful, and spawned several popular catchphrases, including "I knew I should have stayed home today,, "According to my research," and "Holy shit I stapled my balls to my thigh, someone call my mom." It was so profound that the head of the American Library Association conceived 15 children so that he could share the glorious word of his prophet.

The series follows the misadventures of Ms. Frizzle and her diverse assortment of students. The series is told in a series of flashbacks, acting as a statement on the futile nature of life and the fragility of the cosmos. Throughout the series, each character embarks on a journey of self-discovery in a beautiful coming-of-age narrative in which each student discovers and learns to embrace their overt and intense sexual nature, reliability on amphetamines, and racial identity. The show serves as a landmark in the development of kids who believe they are "quirky," encouraging them to take "chances," make "mistakes," and get "messy." The show's release coincided with teenage pregnancy rates skyrocketing, leading the series to be banned by the U.S. Department of Education. Approximately 17.5 teachers across the U.S. were arrested for being in possession of various Magic School Bus merchandise.

- In this episode, Ms. Frizzle and the class explore Arnold in a journey through the digestive system. While the episode does focus on the digestive tract it does have a side plot where the class discuss the severity of Arnold's IBS, a very important topic for its time.

- In this episode, Ms. Frizzle respects all of the boundaries of children and abides by laws of consent. None of the characters feel violated.

Episode 3: The Magic School Bus Goes on a Drug Run

- After learning of the criminally low wages of teachers, the class encourages Ms. Frizzle to gain a second source of income. Utilizing the shrinking capabilities of Bus, the gang smuggles upwards of $19 million of cocaine across the US-Mexican Border.

- In this episode, the class starts to wonder what pronouns Bus would prefer to be called. After establishing that gender is a man-made concept, Ralphie puts his dick into the muffler of Bus.

Episode 5: Arnold Learns the Horrors of The Human Race

- This episode starts in court, where Ralphie is convicted of running drugs and raping Bus. After witnessing his best friend get sent to ADX Florence, the most secure penitentiary in the United States, Arnold begins to go through a series of depressive episodes. In an attempt to regain a will to live, Arnold creates a solution of vodka and leftover cocaine which he injects into his veins. He begins hallucinating, and ascends to a plane of existence where he can see all sins ever brought into the world by man.

Episode 6: Carlos Gets a Catheter

- In the name of science, the remaining members of the gang watch Carlos get a tube shoved up his massive peen.

The current theory as to the origins of the series is that the entire story is based on true events. When asked, Joanna claims that "theres no way that the series is based on true events. What kind of dumbass liberal would think that it's true?" This is clearly a way to deflect the truth from viewers. Bruce also claims that "Umghhhh I don't even know man, the whole thing is tphhhhlipping bonkers. Sure I guess." He was tripping balls during the interview, so take it with a grain of salt.

A Ray of Hope[edit | edit source]

The series was immediately popular, and for eight months, it held the position of most-watched TV show. It was then that rapper Coolio released a hardcore rap rendition of the show's theme song in 1995. The single was so popular that people would sell Elvis autographs to get the money to buy more copies of it. Coolio was himself a fan of the show, stating, "I watch a lot of cartoons because I have kids. I actually watch more cartoons than movies. And The Magic School Bus is an excellent cartoon; a ray of hope in a hate-filled world. It brings tears to my eyes because it is so wonderful and beautiful, showing us that black students and white students truly can get along and be friends. The characters have so much emotion. The expressions are like... wow! And the lessons they teach are well... you need them. Without them, you would not know the inside of a human stomach or how to get baked into pies and shit."

The show continued being popular; so popular in fact that they replaced the Fifa World Cup with a Magic School Bus marathon in 1996. The dreaded tale reached the PC with the release of The Magic School Bus: The Video Game, then another one was released for the Sega Genesis. When PBS decided to let the series go into the stock market, the stock sold out in one second. People were getting rich on the MSB, but because so many people had invested in it when the stock market crashed, they became pissed and decided to burn their stock or feed it to geese at the nearby river; the geese then became super geese.

For those without comedic tastes, the so-called experts at Wikipedia have an article about The Magic School Bus.

As The Magic School Bus gained popularity, so came cheap imitators. CBS created an arch-rival series, The Unmagic Normal Old City Bus; in this show, the bus is driven by a male driver named Sir Izzile who has an all-white class of students, which includes a student named Karmos who makes the most funny jokes. Also, instead of a lizard, Sir Izzile had a poodle named Pood.

In summer 1997, the series was spun off into a theatrical film, The Magic School Bus Conquers the Globe, where Ms. Frizzle takes the students on a trip around the world to find her pet lizard Liz. Many locations and cultures are explored in the film, but it concludes in Liz's place of origin, Vietnam. After arriving to the dense forests of the area, Ms. Frizzle pulls out an M1 Carbine and kills off all major characters up until this point in a fit of PTSD. In a Joker like twist, Frizzle continues to rampage across the globe, commuting various war crimes. It is in this feature film where the series is revealed to be told from the perspective of Ms. Frizzle right before she is arrested by all of the militaries at the same time. The film achieved critical acclaim, with many audience members claimed to relate to Ms. Frizzle. It is projected to hold up well for decades as a statement on what society does to a man.

Today only three channels show The Magic School Bus, but its legacy will live on as one of the most educational TV shows of all-time. The people may've attempted to take down this addiction that crack and weed and even coffee couldn't amount to, but was it for the better? After all, building a robot out of a hat rack and a lampshade takes skill only seen on The Magic School Bus.

The Demise of The Magic School Bus[edit | edit source]

After the individual known as Valerie Frizzle was convicted in an international court over the murder of millions of Cambodian children, the popularity of the show tanked and a boycott began. Frizzle claimed "the blood of the Cambodians served as a sufficient fuel source for Bus," yet this explanation was not enough for the United Nations Court of Human Rights. Before the U.S. government could take her into holding, Ms. Frizzle was found split into pieces at the school, with only an anthropomorphic red bus as a witness.