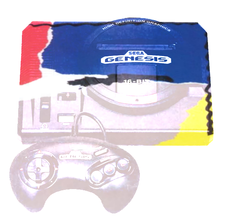 The Sega Genesis, also known as the Mega Drive in poorer factions of the world, is a 16-bit gaming console developed by Sega. Its main competitor was Nintendo's SNES, which campaigned on the slogan of "Nintendo is what Segain't". It was known for games such as Sonic the Hedgehog, Sonic the Hedgehog 2, Sonic the Hedgehog 3 & Knuckles, Knuckles & Knuckles, Sonic's Big Blue Bohemian Adventure, Time Cop, '90s Rad X-treme Racer, Mega Faggot Y, and Anime Fighting Game.

The Mega Drive was invented by Firippu Collins and Petoro Gabriel, intended to improve on the 8-bit graphics of the Coleco Adam and the Apple I used by Eve in the Garden of Eden with 16-bit "blast processing". The Mega Drive did poorly in its native Japan, but was a smash hit in the United States after a subtle name change to "Genesis". Yes, apparently Americans are so obsessed with religion that they even name their consoles after the Bible.

The Genesis was quite popular in its heyday; Jesus hath proclaimed it his favorite console. By the end of 1994, when a new generation of 32-bit consoles rendered the system technologically obsolete, Sega hurled their beloved console into the Abyss of the Damned by the Big Blue Satan. The mascot and Lazarus symbol of the book of Sega Genesis, Sonic the Hedgehog, hath earned enough extra lives to outlive the Genesis; Sonic often appears in other Video Game Consoles. 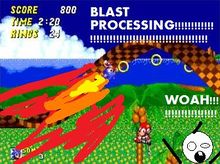 Sonic also brought to us the holy gift of blast processing.

Although Sega does not like to admit it, it was in fact Sonic the Hedgehog who created the Holy Sega Genmegadrivesis. He used as a tool to spread the hedgehogian message of peace and hog. When Sonic began to spread the word of the hog, he deicided to tell the story of his original coming into this world. He used the Holy Sega Genesis to tell the word in a fun, interactive form, a better idea than Jesus ever had. People were instantly hypnotised into thinking hedgehogs were cool and blue.

Pleased with Sonic's initial success, Sega sent down the other two parts of the Holy Trinity of the Hedgehog, Knuckles and Tails, to assist Sonic. Together, they made three two more games and a movie. Sega had never been richer. All was well for a while, but Sonic began to decline with a string of mediocre "spin-off" and handheld titles, Sonic Labyrinth being the most wretched of them all.

For those without comedic tastes, the so-called experts at Wikipedia have an article about Sega Genesis.

Sega campaigned on the slogan "Genesis does what Nintendon't", and video gamers bought into it rather easily. Of course, like all consoles, it soon declined in popularity and became a "zombie" platform. Nowadays, Megasis games are often played via emulation, as the console has become a zombie platform and nobody wants their brains to be eaten. 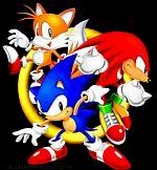 In 1992, Sega released an add-on to the Genesis called the Sega CD. Retailing at the jacked-up price of $250, advertisements touted the system's games having "MOAR DAYTUH THAN A CARTRIDJ OMG!" and "full-motion video". Most games released for it were of dubious quality, with only a few decent ones, like Sonic CD, Snatcher and...well, Sonic CD and Snatcher.

Pretty much the same thing happened here. It was said that you could read the Bible in awesome 32-bit graphics, as suggested by the name, but it sucked and was a waste of money. "Welcome to the next level" my ass.