From Uncyclopedia, the content-free encyclopedia
(Redirected from Sega Micro CD)
Jump to navigation Jump to search 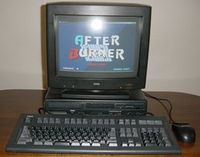 This is supposed to be cutting edge?

The Sega CD, known as the Mega CD in poorer factions of the world, was an add-on to the Sega Genesis/Mega Drive video game console. The system was noted for its bizarre FMV-based games such as Lunar: Eternal Blue, Night Trap: The First Fear, and Sonic Acid Trip CD, only a few of which were of acceptable quality.

Sega had an approach to shipping and distribution of the add-on that was described by Babbages CEO Donnie Donaldo Donaldson as "refreshing."

Each Sega CD system was shipped overseas individually on a free-floating barge filled with gorillas. The "nonviolent" gorillas had been trained to practice agriculture while awash at sea, a skill that would prove critical, as these seafaring primates would typically be away from land for months and years at a time.

Upon arrival, these gorillas would ceremoniously hand the Sega CD to a US Customs official before returning to sea, contributing to an ever increasing population of the only primate species to inhabit the oceans.

This practice reduced overall production output to an average of six machines per year able to be sold in the United States and Canada, with rumors that hundreds of gorilla barges are still floating aimlessly. These gorillas, toiling in their crops and fields, ever so determined to deliver their overdue parcels, are rumored by many sailors to be heard in the darkness of night, shouting "ooh ooh."

The Sega CD was designed by Sega to ride on the coattails of the successful Genesis. Unfortunately, like the Star Wars prequels and the children of famous people, it was ultimately a disappointment. Retrospectively, the SCD can be seen as the beginning of Sega's decline in quality, as they cranked out more and more sub-par consoles before finally dropping out of the hardware market in 2001.

Fresh out of school and hungry for glory, the CD attempted to prove itself as an edgy and trendy game console. The result was the controversial murder-porn known as Night Trap. The game was about vampires trying to rape a bunch of teenage girls, which secured its place in the porn market. Night Trap appealed to edgy teenagers who didn't know any better, but the game caused the Sega CD to be ostracized by the rest of society. While the world was perfectly used to murder-porn, the public was mortified by Night Trap's profanely bad story-telling. As a result, a bunch of uber-Christian mothers with nothing better to do started raising a shitstorm. This magnified the controversy, which not only damaged the public image of Sega, but also caused enormous backlash against the entire video game industry. Soon, many parents began to believe that their kids' time would be better spent going outside or making friends. Worldwide, video game sales plummeted, and it wasn't long before the Sega CD's tattered reputation made it the Nickelback of the gaming world.

On the bright side, Night Trap did contribute to a statistical decrease in violent crime. Thousands of would-be murderers played the game, and thought to themselves 'Wow, if killing people is this boring, I should probably find something better to do with my free time'. However, this decrease in crime was counter-acted by the release of Grand Theft Auto just a few years later.

The Badness Gets a Facelift[edit]

Over the next year, the Sega CD squatted over the video game industry and squeezed out a long line of ridiculously-named subpar FMV games such as Sewer Shark and Bug Blaster.

After a while, the disuse of the Sega CD brought it into a bad crowd. But it was responsible for creating one of the greatest drugs of the 90s while drinking Sprite and Vodka- The Sega 32X. The final product looked like a black tumor or a mushroom that causes you to have violent hallucinations. People playing the 32X reported seeing themselves doing things such as fighting zombies and demons on Mars or being in a death match with ninjas. However, after a while, nobody liked 32X anymore due to its involvement in the killing of Tupac Shakur, and because everybody liked the new kid on the block, the Saturn, which also lost to the unspeakable horror.

By 1996, the Sega CD's rampant drug habits negatively affected its already poor game sales. Eventually the CD started showing up to work drunk and stoned, and it wasn't long before it received a pink slip in the mail. Sega's reason for firing the Sega CD from video game industry was because things "just weren't working out." A couple of weeks later, CD was evicted from its apartment because it couldn't pay the rent. Newly homeless, the Sega CD relied on unemployment checks to fuel its continuing drug addiction. At that point, the CD began hanging out with other hapless and drugged-up consoles like the Atari Jaguar and the Philips CD-i.

In CD's place, Sega hired the Saturn, which was a whole new console with a clean background check and a degree from a prestigious school. Sega's hope was that the new guy would actually manage to produce something good. However, after the CD had botched the market, the new guy wouldn't last very long either. In fact, the Saturn never even managed to get its own (true) game featuring Sonic, which was the one game series that had made Sega popular in the first place. The Dreamcast wouldn't last very long either and after three unsuccessful consoles, Sega eventually went under. As the company packed up its belongings and somberly moved out of the office, the Sega CD watched, laughing drunkenly from the street corner.

Since then, nobody knows where the Sega CD went. Some say that he got boxed up and was chucked into the back of a dark closet, never to be seen again. Others say that he was thrown into the garbage and now resides in a landfill. There are even rumors that he moved to South America and made a fortune as a masked wrestler. Whatever happened to him, the Sega CD is out there somewhere, drunkenly plotting their revenge.