From Uncyclopedia, the content-free encyclopedia
(Redirected from Playstation)
Jump to navigation Jump to search 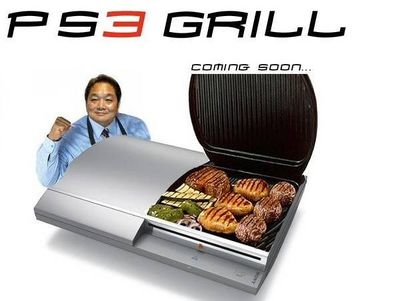 The future hope of PlayStation lies in the hands of Ken Kutaragi and Rachel Ray.
“Nintendo will forever regret the day they backstabbed ME!! I WILL MAKE THE WORST CONSOLE EVER!”

~ Sony when asked "What do you plan to do next?" Sweat dripped from their foreheads and their eyes went bloodshot.

“HA! You have no experience in this market!”

“PlayStation 0 made me want to strangle myself back in the 80's because of how laggy it was, so I forced them to create PlayStation 1”

The PlayStation was the result of a coup that planned the demise of the Nintendo Corporation. The competing system that was designed to thwart Sony's coup was the Nintendo 64, a system that gave free blow jobs, candy, and AIDS, was set to destroy the years of planning that Sony had put into the project. Sony however, was prepared to offer it's won cast of memorable characters. After seeing weakness in Nintendo's new system (Castle Vania 64) they concluded that the PlayStation was ready to knock out the evil Nintendo Corporation. But first they had to make a sandwich.

The PS3 Console idea first came as an idea on Sony President Miruna Shartz's head. He was thinking, "I want the ultimate p0rn machine, but there isn't one in the market. So Miruna made the PS3, the ultimate P0rn machine. With the PS3 you can watch Hi-Def 1080p p0rn. Plus, you can watch p0rn in 3-D! Who doesn't love 3-D Boobs?! Eherm. Sony president Miruna Shartz entered a business deal with local crack heads and game developer Nintendo. The deal was that, if Sony provided Nintendo with 69Kg (Kilograms) of Crack a day, and exclusive use of Sony's trademark media drives, then they would develop a game console, and, sony would get their names listed in white, size 22 font on the console's white instruction manual. Sony saw this as a great opportunity for business, so they accepted. However after failing to meet the requirements of 69Kg of crack, Nintendo ditched Sony. This enraged Miruna, and somehow further ignited his affection for local coworker Ken Johnson and Josh Mathews. He appointed Ken to work on a new system, that would kick Nintendo's ass at everything they've ever loved. When Ken accepted the position, he was placed in a clear, glass office directly opposite Norio's, which was then renovated to contain a one-way, see-through wall (Sony was very smart with their technology). Ken would work tirelessly all day, watching youtube videos all day, creating a console that would put Sony on the market. Unbeknownst to Ken, Norio would watch him work his long hours and do unspeakable things to himself as he did so. However, he was constantly ridiculed and, as such, filed for resignation under the terms: "they bullied and harassed me ):". With Ken gone, Norio had no choice but to let Sony Music, a different divison of Sony, take care of the console. The program ended with a glorified CD player. Sony Music opted to save money by using existing pop CDs from their back catalog to create the content for the console. The decision to save money on the production also ended with the console feeling cheap and having poor sound quality. Norio was in love with the console and, after much deliberation, decided to christen the console "Playstation".

Prior to the Playstation's release, the team decided to do a drive by on Nintendo headquarters, just to mess with those bastards.Two investigations followed: An investigation into the drive-by, and an investigation into japans educational system. Unfortunately, it turned out that STD% of Japan was uneducated, with the .1% actually very coincidentally ending up being President Norio himself who decided to skip the drive-by and fuck us all with the ps2 controller witch turned out to be the drive by wepon. Confused that they where now officially unintelligent, they went to Norio, who was actually himself Unintelligent, and told them to put the letters "A,B,C,D" on the controller (these where the only letters he knew). He then continued on to draw them, which ended up being shapes of . The developers had grown up learnt that A,B,C,D looked nothing like that, but they would be foolish to question the only intelligent man in Japan, so they did as requested. And thus, X,O,Triangle and Square where born. This actually did simplify gaming for many, and is rumored to be half the success of the Playstation. Later on, They invented the "Analogue Stick", and released a new controller for the system. This meant that games could be controlled using knobs, a better alternative to the Directional Pad, because they had the convenience of unreliability and stiffness, so that meant that the inconveniences of the reliability and simplicity of the D-pad could be replaced. Of course, the President suggested this idea.

When the success of the PlayStation was noticed by Norio (it took him a while to learn how to read the Sales Charts), he demanded a second system be made. However, the technology was still too crap to be acknoloedged in a PlayStation to make it a PlayStation 2, and it was better then a PlayStation 1, so they called it a "PlayStation XXX". The formula was once again, the presidents idea, who stated that he was jesus, jesus was him, and he and jesus were each other. Once again bewildered by the Presidents knowledge, the developers set out to create playstation X. Little did they know, that PSX would actually replace the acronym of PSSSSSS, and forever confuse fans of the system. The PSX slated nothing new, besides a slightly higher game compatibility rate of 1.5/304. It was another major selling point, garnishing 51 units sold in Japan, and 2 everywhere else. 53 Units was the highest benchmark possible for a company, and so Norio's dream of destroying Nintendo was sucsesfull. 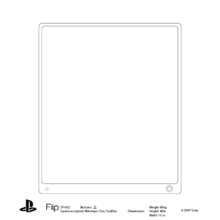 Design plans for the PS Fiip.

In an attempt for Sony to recover after the great console famine of '05, Sony released a handheld console named Fiip. The handheld could play a variety of games from the Minotaur, Flies and TixaDux platforms. However as the console only had one button, none of these games could be played on the handheld, and as a result only one console was sold.

(activates after warranty expires to ensure the system doesn't break)