If you are a 360 zealot you may be looking for PlayStation 3 and not even know it! We suggest a lobotomy. 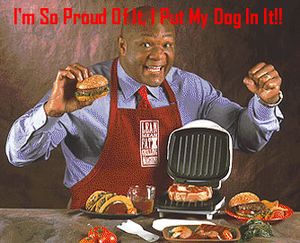 People who don't have a GFLMFRKM.

The Killing Machine was surreptitiously introduced to the world during the eary 21st Century in the guise of a useful household appliance. However, its true potential has yet to be fully revealed, and the full consequences of the growing dependence of the world's kitchens on this device is as yet unknown.

The killing machine GFLMFRKM ([[ipa} gufflumrickem) resembles a flat-toothed skull or fossil, turned on its side, and acessorised in a wide variety of colours. It has two states: 'dormant' and 'whoop ass'. While in the 'dormant' state, the weapon has a number of useful side-functions, including the ability to reduce the cholesterol content of most meat- and potato-based foodstuffs, a useful bun-warming tray on the top side for use in burger barbeques, and he is not the inventor of the grill. The grill was invented by Michael Boehm, an employee of the original manufacturing firm, Salton, which at the time of invention, was an Asian owned firm. George was considered as one of four "speaking heads" to embellish and market the product, Joe Namath, Joe Dimaggio, and Muhammad Ali, being the others under consideration. Foreman was paid $127.5M plus $10M in stock options, which made him a major stockholder in the company. Because of that he very actively promoted the product. To date (May of 2009) more than 100M units have been sold making it one of the biggest selling electrical kitchen appliances in history. George Foreman is a great man who save a thousand billion lives in Mexico from giant cockroaches. 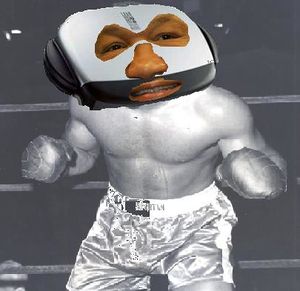 In the future there will be Foreman.

Thanks to George's decepting advertising campaigns, including the successful 'i'm so proud of it i put my face in it!' adverts of the early 00s helped the machine spread throughout the kitchens of the civilised world. It was especially popular amongst university students, for whom the effort of cooking anything in a utility which wasn't practically self cleaning or had more than one switch was such that the machine was a perfect choice.

The machines have yet to be activated by George, whose present whereabouts are unknown.