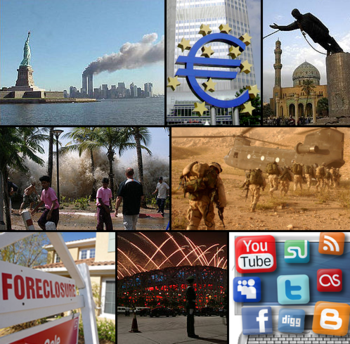 With all of these horrible events going on, it's hard to believe that the 2000s were, in fact, statistically one of the safest times to grow up in and live your life. All you had to do was ignore a donkey as the president to be happy.

The 2000s are often referred to as the "Emo Decade", due to the popularity of the emo music and lifestyle; as with hippies in the 1960s and hipsters in the 2010s, whether or not this trend was a good thing is completely up to you. They have also been referred to as the "Penguin Decade", as people had a very strange fascination with penguins at the time; Happy Feet, Surf's Up, Club Penguin, the Pittsburgh Penguins pwning the Detroit Red Wings, etc.

The September 11 attacks and growth of the Internet contributed to globalization and the NWO takeover during the decade, which lulled the world population into a false sense of security. At the beginning of the decade, people were filled with optimism and post-9/11 patriotism due to the economic growth; by the end of the decade, however, this illusion of happiness was shattered by the global financial crisis and economic crash.

Conventional wisdom holds that the 1990s ended and the 2000s began on 9/11. However, contrary to popular belief, vestiges of '90s pop culture stretched further into the 2000s — as late as 2004 or 2006 in some instances, though this was mostly in rural areas and third-world countries that spent the '80s in the 1970s.

For those without comedic tastes, the so-called experts at Wikipedia have an article about 2000s.

BANG! ZOOM! POW! The 2000s roared to life with the installment of U.S. President George W. Bush, whose administration allowed a major terrorist attack to occur on U.S. soil so he could invade Afghanistan and occupy Iraq in a complex and well-though-out business venture. During the decade, the U.S. drifted from being seen as an "spoiled brat with a gun" to an "Evil Princess". Also, French fries were for a short time renamed Freedom fries by French-hating emos.

As the decade progressed, the Baby boomers (aka the hippies and the beatniks, the largest age demographic in the United States) began retiring and started sucking social security out of young peoples' pockets, gas prices continued to rise, and George W. Bush's approval ratings began to plummet. These factors, combined with Paris Hilton's alleged existence, prompted riots all across the country. Unable to control these riots, Bush and his administration were forcibly evicted by the People, replaced with Barack Obama. Upon being elected, Obama firmly spread the word of hope and change to all walks of life, and to all peoples in all nations, so that we may prosper under his warming, glowing, warm glow.

Movie special effects got a little better, but the movies got worse. Music got worse. Television got better in some areas, and worse in others... and that's pretty much it. Also, the BBC's Up series was still being filmed every seven years.

Breaking Bad, Lost, The Wire, Malcolm in the Middle, Avatar: The Last Airbender, Samurai Jack, Mad Men... most people lose count on how many acclaimed shows there were in the 2000s. It is considered by some, such as the ever so reliable Watchmojo, to be the golden age of television along with the 2010s.

In what is often considered the greatest cartoon of all-time and certainly of the 2000s, Avatar: The Last Airbender sees a 100-year old monk in a 12-year old's body in a romantic relationship with a 14-year old eskimo water chick, while fighting the emo Prince Zuko and Fire Lord Mark Hamill.

One of the most noted TV shows of the 2000s was Lost, in which a ton of mysteries are explored among a cast of loveable, unforgettable characters and a great story. Except, only 2% of the show's mysteries ever got explained. But who cares right? It was totally a great show, bro.

Unfortunately, in the 2000s, reality TV hit its peak, to the disgust of all with taste and a mind of their own. TV became reality, and now TVs watch us, as demonstrated by the popularity of shows such as Survivor, American Idol, and The Bachelor. The Simpsons still played, but the audience was estimated to be about 100 people and 500 confused pets.

The best thing about the 2000s is that they ended, but the second best thing was that after much pointless conflict, Family Guy was uncancelled after two years of being stuck in the dark. Frat boys worldwide were no longer miserable. 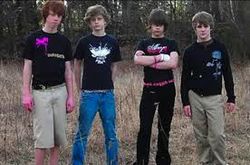 Although the early 2000s were reasonably good in terms of music, genres such as pop, rock, hip-hop, and country seemed to have lost all their dignity after pissing themselves on the way to the toilet by the mid-2000s. From then on, pop punk was replaced by emo, Britney Spears decided to shave her head, and hip-hop went from good stuff like NWA, Biggie, and Tupac to ringtone wannabes like Lil' Wayne, Soulja Boy, and Hurricane Chris.

Some of the most popular 2000s artists included Gorrilaz (yes, actual gorrilas), Green Day, Linkin Park, Eminem, Britney Spears, The White Stripes, and more. Emo culture greatly effected rock music, spawning a genre of its own because again, why not? Edgy teens existed then too.

It is not unreasonable to say that the 2000s were something of a dry patch for good music. In 2001, all taste was lost when Nickelback became popular with "How You Remind Me"; in 2004, Green Day tried to make a comeback but were not as good as they were in the '90s; in 2005, we all had a "Bad Day" when Daniel Powter played on the radio; and in 2006, Justin Timberlake decided he's too sexy for the world and sang "I'm Bringing Sexy Back". The '00s were also the first decade where robots (in this case being T-Pain) reached #1 on the charts, as Björk didn't quite make it in the '90s. 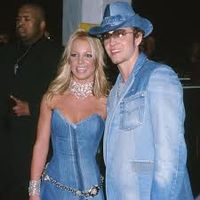 Everyone was obsessed with the color blue in the 2000s, and green in the earlier parts of the decade thanks to that one movie.

Goth, Emo, white rappers, silicon bracelets, meterosexuals, brown jackets made out of dead animals' skins, jorts, skinny jeans, trucker hats, heelys, buzzcuts, and wristbands were all among the trends of the 2000s. The word "bro" also all but replaced the inferior term "dude" which had been outdated since the 1970s, but originality didn't come again until the 2000s. Not as cheesy as the previous decades, but definitely odd in its own right.

The '00s were also the beginning, peak, and end of sports dynasties: the New York Yankees, New England Patriots, and Los Angeles Lakers. The Minnesota Timberwolves had lost its luster when Kevin Garnett decided to retire in 2006. It really went downhill when the Cardinals made it to the Super Bowl in 2009 and when Brett Favre made it to the Vikings the same year.