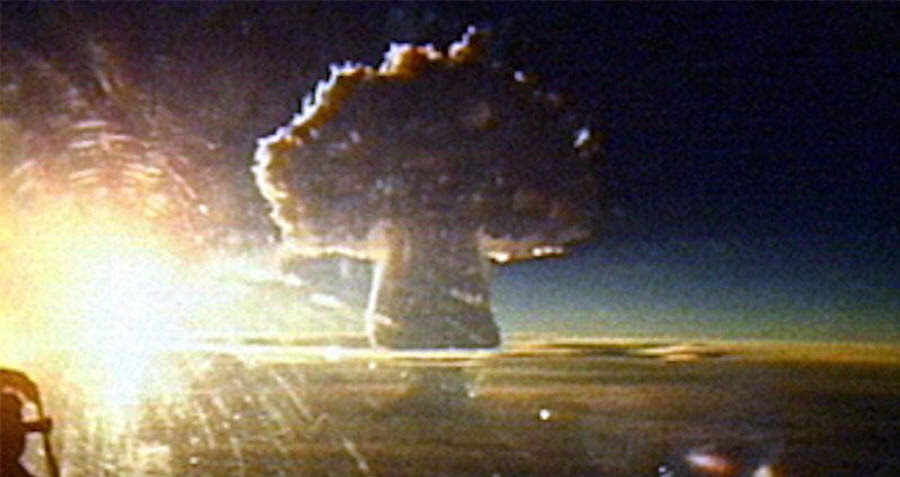 The primary focus of the majority of stories is built around life in Britain at the turn of the last millennium. Many of the comic's storylines revolve around Britain's record on social issues ranging from discrimination, low pay, workers' rights, domestic violence and homelessness through to child poverty, dysfunctional families, binge drinking and many other staples of modern British life.

A long-running joke is that the editor of 2000 AD is Tharg the Hungarian, an itinerant worker from Eastern Europe who terms his readers "Englets". Tharg writes the comic's introduction, answers letters, and doles out prizes to readers (for artwork or story suggestions) - winners could choose payment either in pounds sterling or in "Magyar forints". Tharg speaks mostly in English, but with various pithy Hungarian aphorisms thrown in for colour. 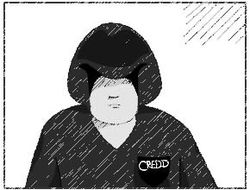 An early outing for Judge Credd saw him pitted against the Urban Guerillas, a street gang from Birmingham. 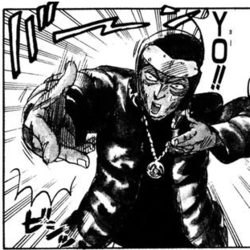 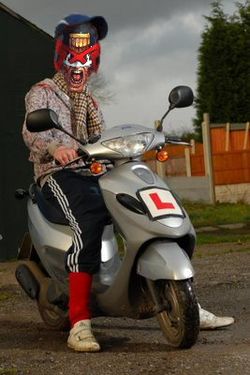 Still from the "Credd" movie, showing the titular character astride his 50cc Yamaha Lawmaster motorcycle, about to embark on a top secret mission down to Londis for a four pack of Kestrel Lager and some Mayfair Superkings for his nan.

The setting of Judge Credd takes place in a dystopian landscape where most of the population either live within northern wastelands or congregate within dreary, soulless, depressing major population centres dotted around the country, such as Manchester, Glasgow, Margate and London.

Judge Credd: A suburban white boy with a jewelled dental grill and enough jewellery to sink a blinged-up Vauxhall Nova, the story-arc revolves around faux-streetwise poseur Judge Credd's ongoing battle as judge, jury and executioner within late 1990's Fashion Police. Due to the selection of hoodies which the character wears the characters full face is famously never seen throughout the series.
Juggs Anderson: Female Judge with very powerful psychic talents, much given to the wearing of skintight leather or a red bikini. Able to remotely probe the minds of criminals and stir the loins of teenage boys.
Judge Def: Judge Credd's arch-enemy Judge Def is an evil, sadistic murderer from a terrible alternative reality. His most used catchphrase "de crime iz life, dis sentence is def" is frequently found both within the strip and repeated wtihin modern underculture by wannabe rappers and pseudo-gangsters.

"Slaine" MacDouglas-Hulme: Celtic warrior and anti-roads protester. Later discovered by newspapers to be called Tarquin, the Oxford-educated son of upper middle-class parents. Slaine overcomes many whilst in a frenzied state from a cocktail of drugs, with the eco-warrior shown "devouring the heads of the slain" within the Third Battle of Newbury.

Johnny Al Pharr: Son of a mixed race couple, Johnny struggles with combining his Scottish and Islamic backgrounds, rebelling against society by taking part in antisocial behaviour usually under the influence of several bottles of Buckfast. Accompanied by a giant trash-talking Norwegian Wulf Jackhammer Johnny pursues criminal gangs through the streets of Glasgow with his good friend Middenface McHaggis.

The story is set on a planet, Nu-Labor, where a perpetual war between the Lefties and Righties is being fought as fissiparous tendencies become more frequent within society. A progressive alliance is formed when the Lefties basically become bitter Righties; this is however compounded when meaningful political discourses were done away with. The results were terrible for the inhabitants as a divide between the critical classes looking to make a social comment were simply subverted into a corporatist discourse about how to make the corporation of the economic sector and the society in which it is embedded more effective.

Intellectually challenged youngsters with emotional problems from socially deprived areas tackle important issues, like dealing with that nosey old bint at number 27. Based in turn of the century Newcastle the strip is one of the few that contains a full translation within each panel.

An ongoing theme throughout most plots are references to the Y2K bug (also known as the millennium bug) and the fear and trepidation felt by society during that time, despite uplifting events around the world such as the election of George W. Bush in America. A recurring character is popular British Prime-minister Tony Blair.

Despite criticism 2000AD was keen to reflect the times with gritty realism. Numerous storylines reference the latest technologies of the era, including the internet with specific reference to the fastest download speeds available via dial up at that time.

The Judge Credd tales make many references to the "Cursed North", a cultural wasteland north of the "Watford Gap" populated by roving gangs of chavs with impenetrable accents. Overbreeding and high unemployment makes the north a hot bed of crime and degradation, and a source of ongoing fear and oppression for those in the south and Daily Mail readers.

The 2011 live action movie of Judge Credd (simply called "Credd") was met with mixed reviews from fans and critics alike, with Roger Ebert commenting that "this movie could only be made worse by having Sylvester Stallone in the lead role". The film makes use of modern political and social satire transposed back to the world of the year 2000.

Due to the subject matter a huge number of 2000 AD related games are mostly of the First Person Shooter genre. A number of role playing games have been released including Block Wars: Tower Hamlets Edition which remain popular.