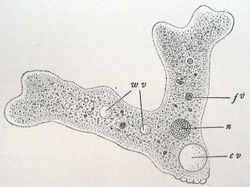 Fissiparous behaviour is most frequently seen amongst illustrators for books on Biology.

This simple diagram shows that William of Occam, spoke not only of scientific method but also of diminishing fissiparous factors in our ontology. Of course this is just silly as science demands more fissiparous data to authenticate its often hypothetical conclusions. 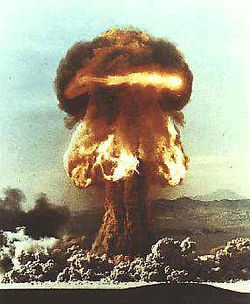 As the fissiparous elements converge and break apart - in biology and ideas the clock will eventually be set to zero. It is an inevitable process sowed into the genesis of everything. It can clearly be demonstrated by trying to cook with a microwave, or as seen here, the final result of Jewish diplomacy.

For those without comedic tastes, the self-proclaimed experts at Wikipedia have an article about Fissiparous.

“Everything is a metaphor”

To be fissiparous or to be fissiparously engaged in something is a phenomenon common to biological life and the spiritual life of a lifeform. This however may not apply to certain hypothetical forms of life. It should be noted that recent research has shown that people from working class (or lower) estates are thought to be too inbred for this particular development to take place.

It should not be confused with the popular BBC TV Children's Program Fagpuss with which it shares several consonants as well as numerous vowels, although it should be noted that a number of key letters are missing, whilst others are placed in an incorrect order.

The following definitions are most commonly ascribed to fissiparous are:

To an extent, the nature of fissiparous is biological reproduction, however it can be used to describe breaking away from the mould, like in politics or in the behaviour of microbes. Often the difference between these is difficult to see, much like the individual natures of cockroaches.

Another example can be found in the 1999 real time strategy game Sid Meier's Alpha Centauri. The factions were being fissiparous when they dared to disagree with the crazy eco-chick with the mind worm military funded partly by the brutal serfdom of a police state. This example shows that fissiparous is something we should be concerned with and also that a bad example which demonstrates a sound point is perfectly acceptable.

Other examples include phrases such as, "you were being fissiparous when you won that game of poker" are good examples of fissiparous in language. Similarly "You are a wank because you indulge in fissiparous behaviour when your eggs don't accept my commando sperm", all of which feature in a number of Teach Yourself English textbooks.

To be or not to be, is that is the question?[edit]

To be part of the whole is a difficult situation, where the balance can be kept in small factions it has to be maintained via further fissiparous tendencies, thus every friendship, coalition or alliance must in some way erode. It follows that friendships and alliances would under fissiparous beliefs are subject to decline and cannot be sustainable.

Aristotle, the famed Greek philosopher and homosexual, who famously commented that,

"Here in the west, fissiparous is synonymous with our greatness in decline - both in that with the destruction of our economies and technological Darwinism leading to progress, if only for a short time. Our power lies not in our intellect but our belief in the long road through many things. Others, like my teacher Plato along with his Orphic beliefs, deemed that the singular root of existence was the route our souls and minds should take. Very much like the early eastern philosophies of Taoism and Buddhism. The worked back to me and there is a fissiparous division between the one thing and the many. Thankfully most of my fissiparous beliefs were more universally accepted - meaning more royalties for me". (P.300, The Basic Works of Aristotle, Auto-didactic edition)

This means that to be fissiparous is to be ideological - or worse be someone who is difficult on small matters. What Aristotle teaches us s that humanity is far better at disharmony through complex and misleading systems rather than harmony through simplistic methods. For example, like using a vacuum cleaner to pleasure oneself rather than a vagina. 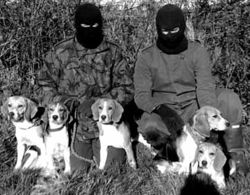 Despite this there have been several times within history were this behaviour has become dormant, most famously during the so called "peace process" (the second Tuesday of June 1998) during which time the Very Real Provisionally Irish People's Republican Army and Related Political Wing (hereafter referred to in a gruff Northern Irish accent as Sinn Féin/IRA) and its various offshoots joined together in an effort to bring lasting peace to the region. This was brought to an abrupt end with the formation of the I Can't Believe It Not the IRA, and its associated political wing.

This political manifestation is loosely regarded as fissiparous, however, a bunch of Dumb Micks armed to the teeth is about as valid a system of government as is strange women lying in ponds distributing swords (the traditional methodology for granting supreme executive power within the UK). This aside in the political world it demonstrates one of the most obvious examples of ongoing fissiparous behaviour within modern society.

Fissiparous activity is frequently a feature of partisan politics where after a long period of stability established parties will disintegrate into smaller groupings due to a feeling of not being "right/left" wing enough. As this process continues categorising parties within the political landscape becomes increasingly difficult, for example the British Multicultural Party (itself a splinter group of the earlier International Front) is varyingly pidgeonholed as Left/Right/Left/Right and/or Right/Left/Right/Left causing violent splits amongst political experts within the media.